Iran-Backed Militias Are the Big Losers in Iraq’s Election 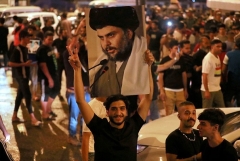 (CNSNews.com) – Voters in Iraq have handed a resounding defeat to Iran-backed groups, slashing the number of parliamentary seats held by the “Fatah” alliance of Shia militias from 48 seats to just 14 – a reversal of the 2018 election when the then-new bloc emerged as the second-largest in parliament.

The largest share of the votes in Sunday’s election – Iraq’s fifth since the fall of Saddam Hussein – went to the movement of the influential cleric Moqtada al-Sadr, which according to interim results increased its seat count in the 329-seat Council of Representatives from 54 to 73.

Sadr, a critic of both U.S. and Iranian involvement in Iraq, called the outcome a victory over militias, and pointedly declared that weapons in Iraq should only be held by the state.

“Weapons should only be under the control of the government and the use of weapons outside this framework should be prohibited, even if it is from those who claim to be muqawama,” he said. The Arabic term refers to the Iran-backed “resistance.”

The Fatah alliance includes pro-Tehran militias that are part of the so-called Popular Mobilization Forces, including the Badr organization, Asaib Ahl al-Haq, and Kata’ib Hezbollah.

The latter two are both U.S.-designated foreign terrorist organizations; the U.S. military holds them and their Islamic Revolutionary Guard Corps (IRGC) - Qods Force mentor responsible for the deaths of hundreds of U.S. personnel during the Iraq war.

Kata’ib Hezbollah is the group whose leader, Abu Mahdi al Muhandis, was killed together with Qods Force commander Qassem Soleimani in a U.S. drone strike in Baghdad in January 2020.

Held months ahead of schedule, the election came two years after young Iraqis took to the streets to protest corruption, economic grievances, and what many saw as Iran’s malign influence via the Qods Force-sponsored militias.

Hundreds of Iraqis were killed during the youth-led protests, many of them at the hands of security forces and militia members.

The protests forced Prime Minister Haider Abdul-Mahdi to resign in December 2019. His successor, Prime Minister Mustafa al-Kadhimi agreed last year as a concession to the protest movement to bring the next elections forward.

Sadr’s call this week for the state alone to hold weapons in Iraq is a clear challenge to the armed militias.

According to Hamdi Malik, an associate fellow at the Washington Institute specializing in Shia militias, the militias responded by drawing attention to a statement by a Kata’ib Hezbollah leader to the effect that the weapons will only be handed over to the Twelfth Imam – the messianic Shi’ite figure who is prophesied to emerge at a time of global chaos.

“This seems to be in response to Muqtada’s victory message in which he emphasized that only the state must control arms,” Malik tweeted. “Now parts of the muqawama is saying that we will never surrender arms to the state & only the Shia 12th Imam is eligible to control our arms when he emerges.”

Senior Fatah bloc leaders expressed unhappiness over the results, with Badr organization secretary-general Hadi al-Amiri calling them “fabricated” and Kata’ib Hezbollah describing them as a “scam and rip-off.”

Talks will now begin on forming a governing coalition, which will require the support of at least 165 legislators.

Other parties that won sizeable proportions of the vote include the Progress Party, a Sunni movement led by parliamentary speaker Muhammad Halbousi (37 seats, according to interim results), the Shi’ite State of Law alliance led by former Prime Minister Nouri al-Maliki (34 seats), and the Kurdish Democratic Party, the largest party in Iraqi Kurdistan (32 seats).

The future of Kadhimi, an independent, is unclear. He kept a pledge not to run in the election, but in the event of a hung parliament he could secure another tenure as prime minister.

State Department spokesman Ned Price on Tuesday withheld a reaction to the outcome, saying the U.S. government was awaiting confirmation of the final results.

“Once the final results are certified, we hope that the new Council of Representatives members will form a government that reflects the will of the Iraqi people, and which can work to address Iraq’s governance, security, and economic challenges,” he told a briefing.

“When it comes to Moqtada al-Sadr, again, we’re waiting for final results. We don’t want to prejudge the outcome,” Price said. “But we do look forward to working with the new government once it is formed.”

White House press secretary Jen Psaki said the administration was pleased that voting was “largely conducted peacefully” and looked forward to reviewing the assessment of U.N. and E.U. monitors and observers.