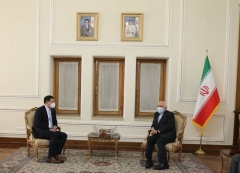 (CNSNews.com) – South Korea is negotiating an agreement to release billions of dollars of Iranian assets frozen because of U.S. sanctions, a deal widely seen as linked to Seoul’s attempts to secure the release of an ethanol tanker and crew seized by regime forces in the Strait of Hormuz early this year.

South Korea’s foreign ministry stressed Tuesday that the money would be released only after consultations with the United States.

Earlier, Iran said its Central Bank governor and Seoul’s ambassador in Tehran had finalized on the amount of the funds to be transferred, and the destination banks.

But reflecting the sensitivity of the issue, South Korea’s foreign ministry said although Iran has agreed to its proposals on ways to use the frozen funds, “the actual unfreezing of the assets will be carried out through consultations with related countries, including the United States.”

State Department spokesman Ned Price said at a daily briefing that the department would not comment on bilateral negotiations with other countries but pointed out that “there has been no transfer of funds.”

South Korea, he said, was “a key treaty ally, and very much a partner when it comes to sanctions enforcement across the board.”

“It wouldn’t come as a shock, I’m sure, to hear you say that we do discuss these issues broadly with the South Koreans, but I wouldn’t want to characterize it beyond that.”

After the Trump administration withdrew from the nuclear deal and restored sanctions on Iran, it agreed to six-month waivers to allow a small handful of countries to continue buying Iranian oil without risking U.S. sanctions. Once those waivers expired in 2019, however, the countries had the choice of halting the oil purchases or losing access to the U.S. financial system and the ability to do business with U.S. companies.

As a result, Iran says some $7-8 billion in oil revenue remains locked up in South Korean banks. For months South Korea has been exploring ways to unfreeze the funds without violating U.S. sanctions, including for example by using a humanitarian channel negotiated between the U.S. and Swiss governments earlier to allow Swiss companies to send medicine and food to Iran.

Also under consideration has been a proposal for some of the funds to be used to pay off Iran’s unpaid dues to the United Nations. Iran owes around $16 million to the world body, and has had its voting rights in the General Assembly suspended as a result.

In early January the situation assumed a new urgency for Seoul, when the Islamic Revolutionary Guard Corps (IRGC) seized a Korean-flagged ship and crew in the Persian Gulf, claiming it was polluting the waterway.

The South Korean-flagged tanker is escorted by IRGC vessels after being seized in the Gulf on January 5. (Photo by Tasnim News/AFP via Getty Images)

The regime has a long history of hostage-taking to secure concessions, and the seizure of the MT Hankuk Chemi and crew was seen to fall within that strategy.

Denying any link between the apprehension of the ship and the frozen funds dispute, regime spokesman Ali Rabiei told reporters a day after the seizure, “If there is any hostage-taking, it is Korea’s government that is holding $7 billion which belongs to us.”

A senior Korean official met with Iranian Foreign Minister Javad Zarif in Tehran a week later and appealed for the release of the tanker and crew. But Zarif said the seizure was a purely “technical” issue being addressed within the judicial framework. At the same meeting, Zarif stressed that the blocking of Iranian assets in South Korean banks was the biggest obstacle to the expansion of bilateral relations.

Then amid talks on the frozen assets, Iran said early this month it would free the 20 crew members, but continue to hold the captain and the ship. The crewmembers were heading to their homes in Korea and Southeast Asia this week.

The news of a pending agreement on the assets prompted expressions of concern from observers.

“If South Korea releases $1 billion from accounts frozen through sanctions to the Iranians for the release of their ship, we can expect more such seizures,” said former Mideast peace negotiator Dennis Ross, a fellow at the Washington Institute for Near East Policy. “It looks much like the way Iranians seize dual nationals to get something in return. This will strengthen the IRGC.”

“This is a tough call for South Korea, but what we know of Iran’s extortion is that it only begets more extortion,” tweeted the advocacy group United Against Nuclear Iran. “It could mean more seizures, potentially disastrous for maritime security.”

“This transfer of about $8B effectively doubles Iran’s accessible foreign exchange reserves,” said Foundation for Defense of Democracies CEO Mark Dubowitz. “Another unilateral Biden administration concession to the clerical regime in exchange for nothing.”

The criticism set off debates on social media, with some arguing that the money was Iran’s in the first place, or that it would be used for humanitarian purposes.

“It isn’t a massive concession. It’s just a decent thing to do in the midst of a global pandemic,” said Ilan Goldenberg, a former Obama administration official now with the Center for a New American Security.

On Tuesday, Iranian President Hassan Rouhani said Iran’s Central Bank has reached agreements with not just South Korea but also Japan, Iraq, and Oman on the release of Iranian assets frozen as a result of U.S. sanctions.

Japan was another of the countries affected by the end of the U.S. sanctions waiver in 2019. Iran says around $3 billion of its assets are tied up in Japanese banks.