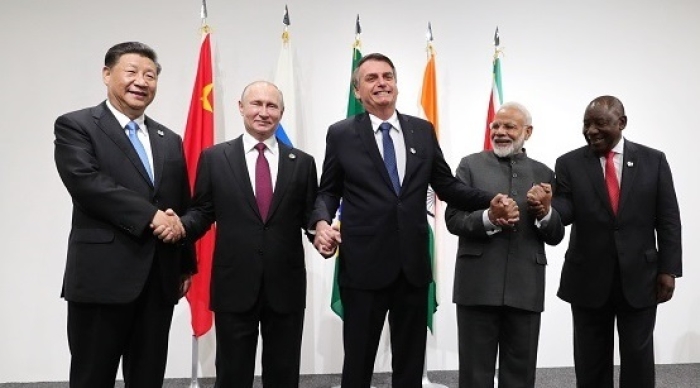 (CNSNews.com) – Iran says it’s applying to join the club of leading emerging economies known as BRICS –comprising Brazil, Russia, India, China and South Africa – as China continues its push to expand the grouping as a counterweight to Western-dominated multilateral forums.

Argentina, meanwhile, has also indicated it wants to become a member.

All five current members would need to agree to expansion of the loose grouping, which held its first summit 13 years ago.

Russia is onboard, but suggests that criteria for future candidates should be agreed upon first, Kremlin aide Yury Ushakov told reporters this week.

“In principle, we look positively at the issue of the association’s potential enlargement, although we understand that it is necessary to approach this issue very carefully,” he said.

“We propose defining the procedures and requirements for potential candidates for joining BRICS,” Ushakov said. “It is important to work out these rules of the potential enlargement and after that consider specific candidates.”

Iran’s foreign ministry spokesman announced on Monday that the regime has formally applied to join BRICS, expressing the hope that Tehran’s membership would bring “added value” both for Iran and the existing members.

The announcement came after Iranian President Ebrahim Raisi late last week addressed the annual BRICS (virtual) summit, hosted by China, which holds the rotating presidency this year. Raisi in those remarks said Iran’s was ready to share its capabilities and potential to help the grouping attain its goals.

The state-owned IRNA news agency at the weekend highlighted Iran’s view of BRICS as a means to counter the West.

“As a grouping beyond continents, BRICS has the potential to create a new structuring for the global economy and politics. It can make a vocal contribution to international economic and political gatherings and challenge the current world order, as Europe and the United States have no presence in the grouping,” it said.

“If Iran and other powerful countries join the grouping, it can be even stronger and challenge Western policies.”

Also taking part in the summit was President Alberto Fernandez of Argentina, who told the meeting, “We aspire to be full members of this group of nations that already represents 42 percent of the world’s population and 24 percent of the global gross product.”

“The BRICS constitute a platform with enormous capacities to discuss and implement an agenda for the future that will lead us towards a better and fairer time,’ he said. “Argentina wants to join that space and offer its contributions as a member of it.”

(Fernandez raised eyebrows when he visited Moscow in early February, at a time when a Russian troop buildup near Ukraine’s borders had heightened fears that it could invade its neighbor. At the Kremlin he told President Vladimir Putin that he was working on getting rid of Argentina’s “dependence” on the United States and the International Monetary Fund.) 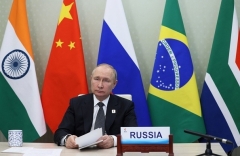 Chinese foreign ministry spokesman Wang Wenbin said after the BRICS summit that as this year’s chair, “China actively supports the BRICS in starting the membership expansion process,” and that all five leaders agreed to the move.

“The leaders believed that with the world facing uncertainties, BRICS countries should strengthen solidarity and elevate BRICS cooperation to a new level so that BRICS can play a bigger role in international affairs.”

BRICS members, he said, should “respect each other’s sovereignty, security and development interests, oppose hegemonism and power politics, reject Cold War mentality and bloc confrontation, and work together to build a global community of security for all.”

In addition to Iran and Argentina, countries that China and Russia have suggested could be potential members include Indonesia, Kazakhstan, Saudi Arabia, Nigeria, and Egypt.

In a recent op-ed, an Indian diplomat and former ambassador raised some of the potential difficulties as current BRICS members weigh up criteria for aspirants.

“The push for setting criteria is actually a battle to choose partners who are more amenable to the individual members of the current BRICS,” wrote Gurjit Singh.

Singh said Brazil would have a say on Argentina’s bid, and noted that “the two countries have a longstanding rivalry in Latin America.”

The prospect of Nigeria and/or Egypt joining would mean South Africa would no longer be the continent’s sole representative in the grouping.

“China, backed by Russia, is hastening the process of expansion of BRICS as part of its strategic challenge to the international order and to collect middle powers around them,” he said.

“China cannot get India out of BRICS or the G20 as it has been trying to keep India out of other international fora,” Singh said. “India needs to ensure that expansion is not on Chinese terms and that the countries admitted are equally receptive to India.”