Iran Watches From the Wings as US, Iraq Reaffirm Plan to Withdraw Remaining Combat Troops 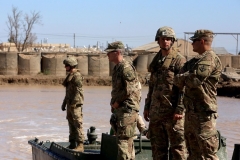 (CNSNews.com) – The word “Iran” does not appear once in a 1,230-word joint U.S.-Iraq statement confirming that “any remaining combat forces” will be removed from Iraq, although the announcement comes amid stepped up rhetoric and attacks by Iran-backed Shi’ite militias demanding their departure.

The statement issued after virtual “strategic dialogue” talks on Wednesday says it was agreed that the combat troops deployed in Iraq to fight ISIS terrorists would leave, at a date yet to be determined.

“Based on the increasing capacity of the [Iraqi Security Forces], the parties confirmed that the mission of U.S. and coalition forces has now transitioned to one focused on training and advisory tasks, thereby allowing for the redeployment of any remaining combat forces from Iraq, with the timing to be established in upcoming technical talks,” it said.

U.S. forces will continue to provide training and advice to the ISF. The statement stresses that their presence on Iraqi military bases “is solely in support of Iraq’s effort in the fight against ISIS.”

U.S. forces withdrew from Iraq in 2011, but in 2014 Baghdad invited them to return to help it fight against ISIS. The government declared victory over the Sunni jihadists in late 2017, and the majority of U.S. personnel have been involved since then in training the ISF to prevent an ISIS resurgence.

U.S. Central Command announced last fall that the number of troops in Iraq would be reduced from about 5,200 to 3,000. Pentagon press secretary John Kirby confirmed on Wednesday that the current number stands at 2,500.

Iraqi foreign ministry spokesman Ahmed al-Sahaf said after the strategic dialogue that U.S. troops will now “be limited to advisory and training missions, and foreign troops will be stationed outside Iraq, according to a certain timetable.”

“Baghdad and Washington have agreed on the absence of [foreign] combat forces in Iraq,” he said.

The continuing presence of coalition forces after the declared defeat of ISIS has drawn strong opposition from Iran-sponsored militias, increasingly so after President Trump ordered a drone strike that killed Iranian Qods Force commander Qassem Soleimani in Baghdad in January 2020.

Soleimani directed some of the key Shi’ite militias, which were and continue to be involved in rocket attacks on Iraqi bases housing U.S. forces and on U.S. military logistics convoys.

The most serious attacks since Soleimani’s death included one in March 2020, in which two American troops and a British soldier were killed at Camp Taji, north of Baghdad.

Another occurred last February, when a civilian contractor was killed and a U.S. service member injured in a rocket attack at a base in Erbil. Ten days later, President Biden ordered airstrikes against militia infrastructure near the Iraq-Syria border.

On Tuesday, Qods Force deputy commander Brig. Gen. Mohammad Hejazi declared that U.S. troops would be ejected from the region in the near future.

“The enemies of Islam, especially the United States, wanted to stifle the voice of the nation in Iraq and break the resistance of the Iraqi people in order to stay there, but they did not succeed,” Iran’s Mehr news agency quoted him as saying. “This is the beginning of their expulsion from the region and the definite will of the nations after the martyrdom of Lt. Gen. Soleimani.”

A propaganda poster posted online this week by a pro-Iranian militia appears to threaten attacks inside the U.S. (Image: MEMRI)

‘We will break the bones of the criminal US’

Ahead of this week’s strategic dialogue, a pro-Iran Iraqi lawmaker and militia leader, Hadi al-Amiri, said in a statement the talks must result in the departure of foreign troops.

“We expect that the brave and zealous Iraqi negotiating team will achieve full national sovereignty and end the presence of foreign forces by setting a clear timetable with short intervals for the withdrawal of combat troops,” he said.

Amiri is the head of a parliamentary coalition that includes the Iran-backed Badr Organization – which he also leads – as well as two Qods Force-aligned militias that are also U.S.-designated foreign terrorist organizations, Kata’ib Hezbollah (KH) and Asaib Ahl al-Haq.

KH has been implicated in many of the rocket attacks targeting U.S. forces in Iraq. One of its top leaders, Abu Mahdi al Muhandis, was with Soleimani when both were killed in the January 2020 airstrike.

KH spokesman Jaafar al-Husseini vowed Wednesday that the group would not stop pressurizing the U.S. to withdraw its troops.

Last month Soleimani’s successor, Brig. Gen. Esmail Qaani, warned that the Qods Force has “made it clear that we will break the bones of the criminal U.S.,” telling a conference that the sound of U.S. bones being “fractured will be heard at proper time.”

On Tuesday, a relatively new Iran-backed militia known as the Zulfiqar Forces released on a social media platform a poster appearing to threaten attacks inside the United States, according to the Middle East Media Research Institute (MEMRI).

“The poster depicted a masked fighter wearing the group’s uniform and holding a machine gun, against the backdrop of the U.S. Capitol building, edited to appear in ruins,” it said. “The Arabic text at the bottom of the poster read ‘Companion of Death,’ highlighting the fearlessness of the group’s fighters.”

The Zulfiqar Forces claimed credit last fall for a rocket attack targeting the U.S. Embassy in Baghdad, which it said was retaliation for the deaths of Soleimani and Muhandis.