(CNSNews.com) – The European Union has defended its decision to send a senior diplomat to Thursday’s inauguration of Iranian President Ebrahim Raisi, but it faced new embarrassment when the E.U. official was seated at the ceremony near leaders of the regime’s leading terrorist proxies.

Among those seated in the front row at the swearing-in ceremony in parliament in Tehran were leaders of the Palestinian terrorist groups Hamas and Palestinian Islamic Jihad, the Lebanese terrorist group Hezbollah, and the Iranian proxy in Yemen, Ansarallah, also known as the Houthis.

One row behind them and a little to their left sat European foreign service Deputy Director General Enrique Mora, whose attendance at the inauguration has drawn widespread criticism.

Raisi is accused of gross human rights abuses during a decades-long career in the regime’s judiciary, including a key role in the extrajudicial executions of thousands of dissidents in 1988.

Leading human rights advocates, including some with links to the U.N.’s human rights office, have called for an inquiry into the mass killings, and Raisi’s role. GOP senators have urged the Biden administration to deny Raisi a visa if he plans to attend the U.N. General Assembly high-level session in New York next month.

In response to queries, an E.U. spokesperson said Thursday that Mora attended the ceremony on behalf of E.U. foreign policy chief Josep Borrell, who is the coordinator of the Joint Comprehensive Plan of Action (JCPOA) Iran nuclear deal.

The Biden administration wants to rejoin the JCPOA, three years after its predecessor withdrew from it, and the E.U. is leading efforts in talks in Vienna to get both the U.S. and Iran to return to compliance.

“It is crucial to engage diplomatically with a new administration and pass directly important messages on issues of concern including the current developments, on human rights and on the negotiations in Vienna,” the E.U. spokesperson said of Mora’s visit to Tehran.

He said Borrell’s “key priority is to resume negotiations in Vienna and facilitate the way back to full JCPOA implementation.”

“We have a balanced policy approach with Iran, through dialogue, critical when there are divergences and cooperative when there is mutual interest,” the spokesman added. 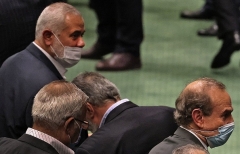 (Seated among the group was Iraqi Shiite cleric Ammar al-Hakim, president of the Iran-backed Islamic Supreme Council of Iraq.)

Hamas and the Palestinian Islamic Jihad are designated as terrorist groups by the European Union, as is what the E.U. refers to as Hezbollah’s “military wing.”

(The U.S. and others, including Britain, Australia, Canada and some Arab Gulf states, do not distinguish between supposed “wings,” but view the group in its entirety as a terrorist organization.)

Hamas, Hezbollah and the Palestinian Islamic Jihad have all been U.S.-designated foreign terrorist organizations for the past 24 years.

The outgoing Trump administration early this year added the Houthis to the FTO list and the list of specially designated global terrorists, but Secretary of State Antony Blinken in February reversed the move, which critics had said would worsen the humanitarian crisis in Yemen.

Iran’s Mehr news agency touted the large number of dignitaries who visited for Raisi’s inauguration, despite travel difficulties relating to the COVID-19 pandemic.

“Under the Coronavirus pandemic, it was natural for some leaders and presidents of certain countries, including the presidents of Pakistan, China and Russia, not to be present in Tehran and instead they have apologized and sent a special envoy,” Mehr said.

“Anyway compared to the previous inauguration in Iran the number and the level of attendees at the inauguration of President Raisi is much higher.”