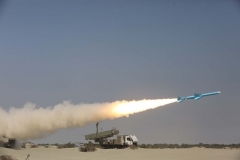 (CNSNews.com) – At a time of tension over troubled talks about Iran’s nuclear program, a pro-regime newspaper on Wednesday published a map of Israel covered in markers – presumably meant to symbolize missile targets – and a warning that Iran is “more than capable of hitting them [Israelis] from anywhere.”

“Just one wrong move!” ran the headline in the top story of the Tehran Times, which calls itself “the voice of the Islamic revolution.”

“An intensification of the Israeli military threats against Iran seems to suggest that the Zionist regime has forgotten that Iran is more than capable of hitting them from anywhere,” it said.

“The Tehran Times doesn’t need to remind the illegitimate regime of Israel of Iran’s defense capabilities,” the paper said. “Yet, they need to remember something.”

It then recalled that supreme leader Ayatollah Ali Khamenei warned eight years ago that if Israelis “make a mistake, the Islamic Republic will destroy Tel Aviv and Haifa.”

As quoted by Iranian media at the time, Khamenei said in a 2013 Iranian new year speech in Mashhad, “Israel’s leaders sometimes threaten Iran, but they know that if they do a damn thing, the Islamic Republic will raze Tel Aviv and Haifa to the ground.”

After Jerusalem, Tel Aviv and Haifa are Israel’s biggest population centers, and they periodically feature in threatening Iranian regime propaganda.

(In 2017 the Islamic Revolutionary Guard Corps unveiled a new surface-to-surface missile, showing it off during a military parade on a truck draped with a banner threatening to turn Tel Aviv and Haifa “to dust.”

The markers on the Tehran Times map go way beyond those two cities. They are scattered across the country somewhat randomly, dotted across the disputed territories including the Gaza Strip (where unlike the West Bank there are no Jewish communities). Some even spill over into the southwestern corner of Lebanon.

An excerpt of the front page of Wednesday's edition of the Tehran Times. (Screengrab)

The map and accompanying article attracted some derisive reactions on social media platforms, with some Twitter users suggesting mockingly that the markers indicated the locations of felafel stands or a popular chain of coffee shops.

“Front page of the Iranian regime newspaper, Tehran Times, is a direct threat to indiscriminately attack Israeli civilians,” he tweeted. “Now just imagine what would happen if this fundamentalist regime was allowed to develop a nuclear weapon.”

Israel regards a nuclear-armed Iran as a potentially existential threat. Former Prime Minister Binyamin Netanyahu firmly opposed the Obama-era nuclear deal, seeing it not as a robust means to keep a lid on Iran’s nuclear activities – as its proponents contended – but as a move that removed economic pressure from the regime while allowing it, over time, to advance its program.

His successor, Prime Minister Naftali Bennett, is similarly minded, and has been urging an end to talks underway in Vienna to try to salvage the deal, known as the Joint Comprehensive Plan of Action (JCPOA).

After fresh concerns early this month about Iranian uranium enrichment in violation of the JCPOA, Bennett accused Iran of using “nuclear blackmail” as a tactic, and urged the “major powers” to take “concrete steps” against the regime.

The talks are not going well, in the assessment of Secretary of State Antony Blinken and the three European parties involved in the process, Britain, France, and Germany, which warned this week that their attempts to salvage the JCPOA were “rapidly reaching the end of the road.”

After the statement from the European trio, Blinken said on Tuesday that the administration continues to seek a diplomatic resolution, but that the U.S. is also “actively engaging with allies and partners on alternatives.”

Khamenei and other Iranian regime figures have for years been calling for Israel’s eradication, describing it as a “cancerous tumor” that must be excised from the region – or more recently, comparing it to the coronavirus.

“Some people argue that the Zionist regime is a reality that the region must come to terms with. They forget that it is necessary to fight and destroy fatal and harmful realities,” Khamenei said in a speech on the last Friday of Ramadan last year, which Iran marks as Quds (Jerusalem) Day.

“Today the coronavirus is a reality and yet all wise people agree that it is necessary to fight it,” he said. “Undoubtedly, the long-lasting virus of Zionism will not last much longer, and it will be uprooted thanks to the determination, faith and pride of the youth.”