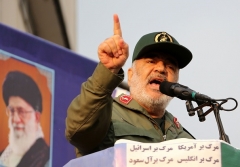 (CNSNews.com) – The head of the Islamic Revolutionary Guard Corps (IRGC) said Thursday the force’s maritime units have been ordered to attack any U.S. Navy ship that threatens the security of Iranian military or civilian vessel.

The comments further escalate tensions, after President Trump warned earlier that Iranian gunboats that “harass” U.S. ships would be destroyed.

He added that any wrong move by Iran’s enemies “will meet our decisive, effective and prompt response.”

The U.S. Navy reported last week that IRGC Navy fast boats had engaged in “dangerous and harassing approaches” towards U.S. Navy and U.S. Coast Guard ships in international waters in the northern Persian Gulf on April 15.

It said 11 Iranian boats “repeatedly crossed the bows and sterns of the U.S. vessels at extremely close range and high speeds,” coming in one instance within ten yards of a Coast Guard cutter, and within 50 yards of a U.S. Navy expeditionary mobile base vessel.

Video released by the Navy showed the boats, displaying the Iranian flag and with guns manned in the bows, moving fast and in close proximity to the U.S. ships.

Earlier this week Trump tweeted, “I have instructed the United States Navy to shoot down and destroy any and all Iranian gunboats if they harass our ships at sea.”

In reaction, Iranian Foreign Minister Javad Zarif tweeted that “US forces have no business 7,000 miles away from home, provoking our sailors off our OWN Persian Gulf shores.”

Zarif’s ministry summoned the Swiss ambassador on Thursday and delivered a protest note in response to what spokesman Abbas Mousavi called “provocative” actions by U.S. forces in the Gulf.

(The Swiss government has served as the U.S. protecting power in Iran since U.S.-Iran diplomatic ties were severed in 1979.)

Mousavi said Iran would “respond to any threats and illegal actions in the Persian Gulf and Sea of Oman proportionately.”

He also condemned what he called Trump’s “threatening and provocative remarks,” and said the U.S. president should “engage the U.S. Navy in containing and handling the new COVID-19 pandemic inside America, where the virus has taken its biggest toll, rather than resorting to adventurism and blame game.”

The vice chairman of the Joint Chiefs of Staff, Air Force Gen. John Hyten, told reporters this week that “every ship that deploys in harm’s way has the inherent right of self-defense.”

If threatened, he said, “we will respond with overwhelming lethal force if necessary, to defend ourselves. It’s really that simple.”

Secretary of State Mike Pompeo in recent interviews has contrasted the Trump administration’s approach to Iran to that of its predecessor, recalling the IRGC’s seizure four years ago of 10 U.S. Navy sailors in the Persian Gulf.

“This administration behaves totally different than the previous one,” he told Fox News’ Sean Hannity on Thursday night. “You’ll recall when they took our Navy sailors, made them kneel down, and Secretary [of State John] Kerry apologized to get them back.”

“This president has taken a completely different approach,” Pompeo said. “He has told the Iranian regime, ‘Enough, we’re not going to permit this, we’re going to defend our soldiers, our sailors, our airmen, and Marines.’ I think the Iranians understand that as well.”

During the January 2016 incident, the U.S. sailors were detained after their two small patrol boats had inadvertently entered Iran’s territorial waters, according to U.S. Central Command.

They were held for almost 15 hours, but allowed to leave after Kerry contacted Zarif. Kerry said later the relationship he had built up with Zarif in the nuclear negotiations had helped to ensure a swift resolution.

Meanwhile the regime’s media outlets repeatedly showed images of the sailors’ detention at gunpoint, along with video clips showing a sailor apologizing for entering Iranian waters, and another one apparently close to tears. The Pompeo State Department says doing so was a violation of the Americans’ rights under the Geneva Convention.