(CNSNews.com) – As Republicans continue to call for climate envoy John Kerry to resign or be investigated over allegations of improper interaction with Iran’s foreign minister, Iran's President Hassan Rouhani claimed Wednesday that Iran’s enemies had been responsible for the leak of an audio recording at the center of the controversy.

Addressing his cabinet, Rouhani said the leak of a recording of a lengthy interview featuring Foreign Minister Javad Zarif had come at a time when talks in Vienna designed to salvage the Iran nuclear deal were “at the height of success.”

The discussions in Vienna aim to return both the U.S. and Iran to compliance with the Obama-era Joint Comprehensive Plan of Action (JCPOA) – a lifting of sanctions on the part of the U.S., and Iran’s reversal of actions it has taken in its nuclear program in violation of the deal.

In the U.S., the most explosive aspect of the leaked recording has been Zarif’s claim that Kerry had informed him about covert Israeli military strikes against Iranian targets in Syria. Kerry, who worked closely with Zarif during the JCPOA negotiations and has acknowledged having met with him several times after his tenure as secretary of state ended in January 2017 – has called the allegation “unequivocally false.”

For Iranians, the focus is on comments made by Zarif seen as critical of Qassem Soleimani, the Islamic Revolutionary Guard Corps (IRGC)-Qods Force commander killed in a drone strike in Baghdad, ordered by President Trump in January last year. Long a heroic figure for the regime and its supporters, Soleimani became even more venerated since his “martyrdom.” 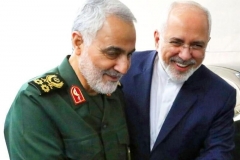 But Zarif in the recording suggested the IRGC’s military actions had taken precedence over and undermined his work, saying, “I have sacrificed diplomacy for the military field, rather than the field servicing diplomacy.”

Rouhani’s second term ends this year, and Zarif was considered a possible contender in presidential elections scheduled for June. (For his part, Zarif has denied wanting to run.) Now Iranian media outlets are saying that will never happen, and some commentators in the country are suggesting the leak may have been the work of Zarif’s domestic opponents, aimed at scuppering his chances.

Rouhani, however, accused Iran’s enemies of being behind the leak of a recorded interview that was part of a government “oral history” project and not intended to be made public in its entirety.

“The audio tape has been released by those who are against Iran, people of Iran and the interests of Iran at the exact juncture that [nuclear deal talks in] Vienna is at the height of success, in order to create division in the country,” he declared.

The Tasnim news agency, which has close links to the IRGC, quoted Rouhani as saying that Israel, the U.S., and “reactionary” regimes in the region – a reference to Sunni rivals like Saudi Arabia and the UAE – were angry about Iran’s “success,” because their plotting of the past four years had come to nothing.

Rouhani has instructed the intelligence ministry “to identify the agents of this conspiracy,” according to government spokesman Ali Rabiei.

Trump withdrew from the JCPOA in mid-2018 and restored sanctions that had been lifted under it; President Biden wants to return to the accord, and the talks in Vienna are aimed at reaching that goal.

Rouhani told his cabinet the Americans, and the other parties to the JCPOA, have all realized that they have no option but to surrender to “international law” and acknowledge that Iran was in the right.

As far as the substance of Zarif’s comments go, Rouhani distanced his government from some of them, saying they did not reflect his views or those of his administration. He emphasized that “diplomacy” and “the military field” were not separate or contradictory areas of action.

Rouhani also praised Soleimani, saying he had succeeded in foiling U.S. and Israeli plots in the region. He said that Trump had ordered the killing of Soleimani at the behest of “the Zionists.”

U.S. military leaders blame Soleimani for the deaths of hundreds of American troops killed by Qods Force-backed militias during the Iraq war. Untold numbers of Syrian and Yemeni lives lost have been attributed to the regime’s intervention in those countries’ civil wars, overseen by Soleimani. Trump in his last State of the Union address described the dead general as “the Iranian regime’s most ruthless butcher” and “the world’s top terrorist.”

Zarif himself has not spoken publicly about the controversy over the leaked audio, although his foreign ministry’s Farsi website has posted a video featuring Zarif eulogizing Soleimani, and photos of the two together, over patriotic music.