Islamic, Communist, and Other Autocratic Regimes Back China's Treatment of Muslims in Xinjiang

(CNSNews.com) – Twenty Islamic states at the United Nations on Tuesday joined two dozen others, including communist and autocratic regimes, in a show of support for China’s policies in Xinjiang province, where -- according to the United States and others -- more than a million Uyghurs and other minority Muslims have been incarcerated in re-education camps.

The countries rallied around Beijing at a meeting in New York of the U.N. General Assembly committee dealing with human rights, after a group of mostly Western nations, including the U.S., issued a joint statement deploring the Chinese Communist Party’s abuses in the country’s far-western province, as well as its clampdown on democracy in Hong Kong.

Reflecting China’s growing clout in the international community and the far-reaching impact of its massive Belt and Road Initiative (BRI) investment and infrastructure program, a total of 45 countries signed up to a statement delivered by Cuba’s representative, commending China’s “people-centered philosophy in advancing economic and social sustainable development … and promoting and protecting human rights,” and echoing Beijing’s assertion that “people of all ethnic groups enjoy their happy lives in a peaceful and stable environment” in Xinjiang.

The signatories included Russia, North Korea, Cuba, Burma, Belarus, Eritrea, Venezuela’s Maduro regime, and China itself – all ruled by repressive regimes – along with 20 members of the Organization of Islamic Cooperation (OIC), the bloc of mostly Muslim-majority countries which, in other contexts, vocally defends Muslims, especially Muslim minorities, whom it deems to be under threat.

The OIC members backing China’s treatment of minority Muslims included ten Arab states – Saudi Arabia, Egypt, Iraq, Bahrain, United Arab Emirates, Morocco, Sudan, Yemen, Syria’s Assad regime, and the “state of Palestine,” which although not a sovereign state or member of the U.N. is treated as such in the world body. 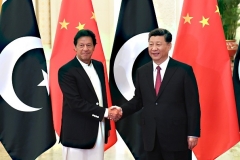 The statement read out by Cuban Ambassador Ana Silvia Rodríguez echoed the Chinese government’s talking points on Xinjiang – that measures taken there were “in response to threats of terrorism and extremism,” that they have ensured that “there was no single terrorist attack in Xinjiang in the last three years,” that all ethnic groups enjoy “happy lives in a peaceful and stable environment,” and that allegations against China are motivated by “bias.”

Earlier, German Ambassador Christoph Heusgen read a statement on behalf of 39 mostly-Western democracies, expressing grave concern “about the existence of a large network of political re-education camps where credible reports indicate that over a million people have been arbitrarily detained” in Xinjiang.

“We have seen an increasing number of reports of gross human rights violations. There are severe restrictions on freedom of religion or belief and the freedoms of movement, association, and expression as well as on Uyghur culture,” he said. “Widespread surveillance disproportionately continues to target Uyghurs and other minorities and more reports are emerging of forced labor and forced birth control including sterilization.” (The statement also voiced concern about Beijing’s curtailing of political freedoms in Hong Kong.)

‘Providing care to its Muslim citizens’

In response, Chinese Ambassador Zhang Jun launched a long and scathing attack, focused almost entirely on the U.S., and covering topics from wars to Black Lives Matter protests, to the COVID-19 death toll in the U.S.

“You cannot cover up your poor human rights record by accusing China,” Zhang said in remarks directed at the U.S. “Before hurling accusations, you are better off taking a good look at yourself in the mirror.”

This is not the first time members of the OIC have sided with China over Xinjiang.

Last summer, when 37 countries signed a letter delivered at another U.N. forum – the Human Rights Council in Geneva – praising Beijing’s policies in Xinjiang, more than half of them were OIC members.

In March last year, OIC foreign ministers meeting in Abu Dhabi issued a statement dealing with Muslim minorities around the world. The single paragraph on China stated that the OIC “commends the efforts of the People’s Republic of China in providing care to its Muslim citizens; and looks forward to further cooperation between the OIC and the People’s Republic of China.”

The OIC frequently issues statement on troubling situations affecting Muslims around the world. The most recent one to be found on its website voicing concern about the Muslims in Xinjiang was issued more than five years ago – well before information began emerging about the mass incarcerations and abuses.

China is the leading trading partner of at least 20 of the 57 OIC members, some of whom are partners in the BRI, the ambitious infrastructure program which Secretary of State Mike Pompeo has called “bribe-fueled debt-trap diplomacy.”