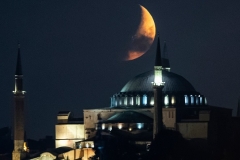 A crescent moon over Hagia Sophia in Istanbul at the weekend. Muslim prayer was held there on Friday for the first time in 86 years. (Photo by Ozan Kose/AFP via Getty Images)

(CNSNews.com) – Turkish President Recep Tayyip Erdogan on Sunday shrugged off the dismay expressed by many Christians over the decision to revert one of the faith’s most important cathedrals into a mosque, saying some people clearly have never accepted the Muslim conquest of Istanbul, the city once known as Constantinople.

“Despite the fact that centuries have passed since its conquest, we see that they still do not accept that Constantinople is in the hands of the Turkish nation and Muslims,” Erdogan said in a speech at the opening of a new regional headquarters for Turkey’s national intelligence service, MIT.

In an event imbued with great significance for Muslims around the world – and marked by Orthodox Christians as a day of mourning – Istanbul’s Hagia Sophia on Friday hosted Muslim prayer for the first time in 86 years.

Built in the sixth century by the Byzantine Emperor Justinian, the structure served as the seat of eastern Christianity for around 900 years before Ottoman forces under Fatih Sultan Mehmet seized and converted it into a mosque in 15th century.

In 1934 Mustafa Kemal Ataturk, the founder of the modern, secular republic of Turkey, decreed that it should be a museum.

Hagia Sophia operated as a museum until a top court revoked the decree earlier this month. Then Erdogan, who had made the issue a campaign pledge, immediately issued a new decree restoring its previous status as a mosque.

Erdogan was front and center in the landmark building, known in Turkey as Ayasofya, as thousands of Muslims inside and out – most wearing masks as a coronavirus measure – prayed on Friday.

As they did so, Christian images, including mosaics depicting Jesus and the Virgin Mary, were covered up, in line with an earlier decision by the government religious authority known as the Diyanet.

Erdogan recited from the Qur’an before the call to prayer, after which the head of the Diyanet, wearing a ceremonial sword, delivered a short sermon highlighting the significance of the day as a “sign of conquest.”

The preacher, Ali Erbas, told reporters he had carried the “sword of conquest” to revive the custom during the building’s centuries as a mosque.

Erbas’ sermon stoked controversy, with comments interpreted by some Turks as condemning Ataturk over his decision to declare the building a museum in 1934.

“Sultan Mehmet the Conqueror dedicated this magnificent construction to believers to remain a mosque until the Day of Resurrection,” he said. “Any property that is endowed is inviolable in our belief and burns whoever touches it. The charter of the endower is indispensable and whoever infringes upon it is cursed.”

(Fundamentalist Islam holds that Muslims have an eternal right to any territory that ever fell under Muslim rule, a belief that underpins some Islamist claims to places like Jerusalem, Kashmir, and even most of Spain. Erbas said Hagia Sophia’s reversion to a mosque provides hope to “all crestfallen and oppressed mosques on earth, first and foremost Al-Aqsa” in Jerusalem.)

The Hurriyet daily quoted lawmakers from the opposition Republican People’s Party (CHP), which was founded by Ataturk, as saying that cursing the republic's founder amounted to treason. Some called for Erbas’ resignation.

Erbas denied that his comments had been directed at Ataturk.

Reflecting the significance of the day to Muslims around the world, television stations in numerous Islamic countries broke away from normal programming to cover the Friday service live.

Iranian state television hailed what it called “one of the most important events of the century,” and Erdogan received messages of congratulations from a number of Islamic leaders.

Earlier the U.N. cultural agency UNESCO, said it “deeply” regretted the Turkish decision, carried out without consultation. The Hagia Sophia was added to UNESCO’s World Heritage List in 1985.