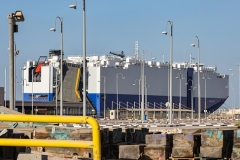 The Israeli-owned cargo ship MV Helios Ray ship docked in Dubai’s Port Rashid on Sunday, two days after sustaining an explosion in the Gulf of Oman. (Photo by Giuseppe Cacace/AFP via Getty Images)

(CNSNews.com) – Israeli Prime Minister Binyamin Netanyahu has pointed a finger at the Iranian regime after an Israeli-owned cargo vessel was damaged in an explosion near the Strait of Hormuz on Friday, an incident recalling a series of maritime blasts in the region in 2019 which the U.S. blamed on Iran.

“This is indeed an action by Iran, it is clear,” Netanyahu told Israel’s public broadcaster Kan in comments broadcast on Monday. When asked whether Israel would retaliate, he said only that Iran was Israel’s “biggest enemy,” adding that “we’re striking them across the region.”

Other government and military officials suggested earlier that Iran was likely responsible, but Netanyahu was the first to categorically lay blame.

On Sunday night Syria’s SANA state news agency reported that its military had intercepted several Israeli missiles near Damascus, shooting down “most of them.” Israel does not generally comment publicly on such reports, but is suspected to have periodically targeted Iranian infrastructure and forces based in Syria in support of the Assad regime.

The MV Helios Ray, a 650-foot-long roll-on, roll-off vehicle carrier flying the Bahamian flag, was holed above the water line around 50 miles north-east of Muscat in Oman on Friday. The crew were uninjured, according to the United Kingdom Maritime Trade Organization.

The ship had left the Saudi port of Damman, near Bahrain, on Wednesday, initially scheduled to arrive in Singapore on March 5. The explosion occurred after it had traversed the Strait of Hormuz and into the Gulf of Oman. It then came about and returned through Hormuz to Dubai’s Port Rashid. According to MarineTraffic.com it remains there on Monday.

“Whilst details regarding the incident remain unclear it remains a realistic possibility that the event was the result of asymmetric activity by Iranian military,” the maritime intelligence firm Dryad Global said in a brief analysis at the weekend.

“Such activity would be commensurate with current tensions and Iranian intent to exercise forceful diplomacy through military means within its immediate area of interest.”

Dryad Global noted that tensions between Israel and Iran are “fraught, especially in light of increased signs of rapprochement between Iran and the Biden administration.”

At the same time, Iran is concerned about improving ties between Israel and the Arab Gulf states, it noted.

Iranian foreign ministry spokesman Saeed Khatibzadeh on Monday denied Israel’s claims, saying the fact the accusation was coming from “the Zionist regime” revealed how baseless it was. He told a press briefing that Israel was “the root cause of all insecurities and instabilities.”

Israeli media reports say the ship was believed to have been damaged by mines or missiles placed or fired by the Islamic Revolutionary Guard Corps (IRGC), whose vessels patrol the Persian Gulf. Ha’aretz reported on Sunday that security officials from Israel had traveled to Dubai to investigate.

The incident came shortly after President Biden ordered F-15 airstrikes against facilities used by Iranian-backed militias in eastern Syria, in retaliation for a rocket attack on a base in Iraq which killed a Filipino contractor and injured an American service member.

The timing prompted some to ponder whether there may be a link.

“[B]y choosing a measured response, rather than the pursuing a more forceful response as [President] Trump ultimately did, Biden might not have done enough to dissuade further Iranian aggression,” analysts at the Washington-based Jewish Institute for National Security Affairs said in a policy memo.

“The suspected Iranian targeting of an Israeli cargo ship, within hours of the U.S. strike in Syria, suggests that Iran is not convinced that Biden is committed to either repeatedly intervene in the region militarily or use U.S. military force to protect Israel, despite Pentagon statements.”

In the summer of 2019, a series of explosions damaged vessels in the Gulf of Oman. When four tankers sustained damage off the United Arab Emirates coast in May, the U.S. accused Iran of responsibility, and the UAE told the U.N. Security Council a “state actor” was most likely behind those attacks. Iran denied responsibility.

Just days before the incident, the IRGC had “attempted the covert deployment of modified dhows capable of launching missiles,” then-Secretary of State Mike Pompeo said at the time.

In June 2019, two tankers caught fire after explosions in the Gulf of Oman. U.S. Central Command then released grainy footage, captured by surveillance drone, showing what it said were personnel in an IRGC patrol boat appearing to remove an unexploded limpet mine from the hull of one of the two damaged ships.

Iran again denied responsibility, accusing its enemies of carrying out a “false flag” operation aimed at increasing pressure on the regime.

IRGC forces have also been involved in more direct confrontations with shipping in the vicinity of the Gulf’s Strait of Hormuz, a crucial waterway through which some 30 percent of the world’s crude oil passes.

Early this year a South Korean ethanol tanker and its crew were seized in the Gulf – the IRGC claimed it was polluting the waterway – and held amid an ongoing dispute between Tehran and Seoul about frozen Iranian assets.

In 2016, the IRGC seized 10 U.S. Navy sailors in the Persian Gulf after their two small patrol boats inadvertently entered Iran’s territorial waters. They were held at gunpoint for almost 15 hours, until intervention by the Obama administration secured their release.