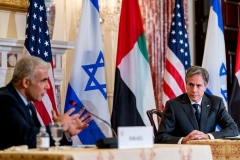 (CNSNews.com) – Israel reserves the right to take action against Iran at any time to prevent the development of nuclear weapons, Israeli Foreign Minister Yair Lapid said in Washington on Wednesday.

“This is not only our right but our duty,” he said during a joint press conference with Secretary of State Antony Blinken and their Emirati counterpart, Abdullah Bin Zayed Al Nahyan.

“Iran announced publicly that it intends to wipe Israel off the face of the earth, and we have no intentions of being wiped out.”

Lapid noted that his family and Blinken’s both include survivors of the Holocaust.

“We know there are moments when nations must use force to protect the world from evil,” he said. “If a terror regime is going to acquire a nuclear weapon we must act. We must make clear that the civilized world won't allow it. If the Iranians don’t believe the world is serious about stopping them, they will race to the bomb.”

But Iran featured prominently in the briefing, with the Israeli minister saying “Iran’s race to nuclear capability” was at the center of his visit to Washington.

“Every day that passes, every delay in negotiations brings Iran closer to a nuclear bomb,” he charged. “The Iranians are clearly dragging their heels, trying to cheat the world to continue to enrich uranium, to develop their ballistic missile program.”

The Biden administration is seeking a mutual return by the U.S. and Iran to the 2015 Joint Comprehensive Plan of Action (JCPOA), the nuclear deal from which its predecessor withdrew in 2018.

That would require the U.S. to lift the sanctions reimposed after President Trump withdrew from the agreement, and Iran, which began to violate the deal’s terms in response to Trump’s exit, would have to return to compliance.

Since April, six rounds of talks in Vienna aimed to reach an agreement but the process stalled before Iran’s presidential election in June. Tehran has so far refused to resume.

In the meantime, it continues to produce enriched uranium in quantities and levels of purity that were prohibited under the JCPOA, steadily reducing the amount of time it would need to produce enough weapons-grade uranium for a bomb, should it take a decision to do so – known as “breakout” time.

When President Biden hosted Israeli Prime Minister Naftali Bennett at the White House in August, he said the administration was pursuing diplomacy with Iran first, “but if diplomacy fails, we’re ready to turn to other options.”

Blinken and Lapid were both asked on Wednesday about those options.

Blinken restated a position he has made repeatedly in recent months, that time is running out for an Iranian return to the JCPOA to recapture the “benefits” of the deal, since “Iran has been using this time to advance its nuclear program in a variety of ways.”

“As the foreign minister [Lapid] said, we are discussing this among ourselves, and we will look at every option to deal with the challenge posed by Iran,” he said. “We continue to believe that diplomacy is the most effective way to do that, but it takes two to engage in diplomacy, and we have not – we have not seen from Iran a willingness to do that at this point.”

‘Everybody understands … what is it that we mean’

Asked specifically whether “the military path” was an option on the table, Blinken stressed again that diplomacy was seen as the most effective option.

But, saying again that time was running short, he added, “we are watching Iran’s comments, posture very, very carefully. And as the minister said, we are prepared to turn to other options if Iran doesn’t change course.”

For his part, Lapid added, “Yes, other options are going to be on the table if diplomacy fails. And by saying ‘other options,’ I think everybody understands – here, in Israel, in the Emirates, and in Tehran, what is it that we mean.”

At a Pentagon press briefing on Tuesday, press secretary John Kirby said in response to a query on Israel and Iran that Defense Secretary Lloyd Austin fully supports the diplomatic effort led by Blinken.

At the same time, he said, “we’re constantly reviewing our capabilities in the region to make sure that we are appropriately poised, and that we continue to have the kinds of relationships we need to have to allow for us to continue to defend the nation there.”

The International Atomic Energy Agency reported last month on the regime’s continuing violations of the JCPOA-set limits on uranium enrichment and its refusal to allow inspectors regular access to monitoring equipment deployed at nuclear facilities.

“In many ways, Iran’s nuclear capabilities now greatly exceed their status in early 2016, when the JCPOA was implemented,” Institute for Science and International Security scholars David Albright and Sarah Burkhard warned in a recent report.

“Its breakout time, namely the time needed to produce enough weapon-grade uranium for a single nuclear weapon or explosive device, is on order of one month,” they wrote.

“Although Iran would need more time to build a nuclear explosive device or even longer to build a deliverable nuclear weapon, it has extensive experience in developing and manufacturing nuclear weapons and is ready to build its first one on short order.”