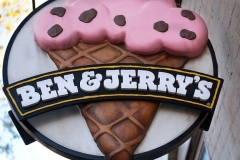 Ben & Jerry's says it will stop selling its ice cream in the "occupied Palestinian territories." (Photo by Robert Alexander/Getty Images)

(Update: State Department spokesman Ned Price said Tuesday the administration respects the First Amendment rights of the American people but holds the view that “the BDS movement unfairly singles out Israel.” Regarding Ben & Jerry’s, he declined to comment on “the motivations of a private company.”)

(CNSNews.com) – Israel responded frostily to Ben & Jerry’s announcement Monday that it will stop selling its ice cream in the disputed territories, with Foreign Minister Yair Lapid appealing to U.S. states that have passed anti-BDS measures to enforce them against the “progressive” Vermont-based company.

“Ben & Jerry’s decision represents shameful surrender to antisemitism, to BDS and to all that is wrong with the anti-Israel and anti-Jewish discourse,” tweeted Lapid, referring to the anti-Israel boycott, divestment and sanction movement.

“Over 30 states in the United States have passed anti-BDS legislation in recent years. I plan on asking each of them to enforce these laws against Ben & Jerry’s,” he added. “They will not treat the State of Israel like this without a response.”

Ben & Jerry’s said in a statement it believes selling its ice cream in “the Occupied Palestinian Territory” was inconsistent with its values.

“We also hear and recognize the concerns shared with us by our fans and trusted partners.”

The company said it had informed its licensee who makes the ice cream in Israel and distributes it in the region “that we will not renew the license agreement when it expires at the end of next year.

“Although Ben & Jerry’s will no longer be sold in the OPT, we will stay in Israel through a different arrangement,” it said. “We will share an update on this as soon as we’re ready.”

Anti-Israel activists have long complained about Ben & Jerry’s ice cream being sold in Israeli communities located in areas where Palestinians want to create an independent state.

“We welcome Ben & Jerry’s decision to stop doing business in what is internationally recognized as illegally-occupied territory,” said Ibrahim Hooper, national communications director for the Council on American-Islamic Relations (CAIR).

“American corporations should not support Israeli violations of human rights and the breaking of international law.”

If Not Now, a left-wing Jewish activist group working to end U.S. Jewish support for Israeli control over territory claimed by the Palestinians, called the decision “an important victory for movement for Palestinian freedom.”

“I know where I’m getting my ice cream today,” tweeted Rep. Cori Bush (D-Mo.) as she retweeted a Ben & Jerry’s post announcing the decision. “Who’s coming with?”

Some BDS supporters grumbled, however, that Ben & Jerry’s was not pulling its products from Israel altogether.

“All of Israel is occupied Palestine,” read a typical tweet responding to that part of the statement.

Drawing attention to that thinking, StopAntisemitism.org, part of a non-profit foundation that works to expose antisemitism “regardless of source,” responded to the announcement by saying, “Ben and Jerry's fails to realize BDS refers to ALL of Israel as occupied Palestinian territory. Do they honestly think appeasing these bigots will help anything? Shameful.”

The BDS movement has long drawn strong, bipartisan opposition in the U.S. Congress – despite the emergence in recent years of progressive Democratic supporters of BDS including Bush, Tlaib and Rep. Ilhan Omar (D-Minn.)

In 2019, Tlaib, Omar and fellow “Squad” member Rep. Alexandria Ocasio-Cortez all voted against an anti-BDS measure that passed with a large bipartisan majority.

Democratic leaders, including House Speaker Nancy Pelosi and Senate Majority Leader Chuck Schumer are on record as opposing the BDS movement, and the party’s 2020 platform did so too, stating, “We oppose any effort to unfairly single out and delegitimize Israel, including at the United Nations or through the Boycott, Divestment, and Sanctions Movement, while protecting the Constitutional right of our citizens to free speech.”

Critics argue that BDS is inherently anti-Semitic, since it targets only the Jewish state and none of the numerous other nations around the world where territorial disputes exist.

As Lapid noted in his tweet, 35 states in the U.S. have passed legislation or enacted executive measures designed to discourage BDS, with the first of its kind signed into law by then-South Carolina Gov. Nikki Haley in June 2015.

Ben & Jerry’s was bought by the consumer goods conglomerate Unilever in 2000. In a statement Monday, Unilever said, “As part of the acquisition agreement, we have always recognized the right of the brand and its independent board to take decisions about its social mission.”

It said Unilever remained “fully committed to our presence in Israel, where we have invested in our people, brands and business for several decades” and welcomed Ben & Jerry’s decision to “stay in Israel.”

NBC News reported on an apparent clash between Unilever and Ben & Jerry’s board over the handling of Monday’s announcement.