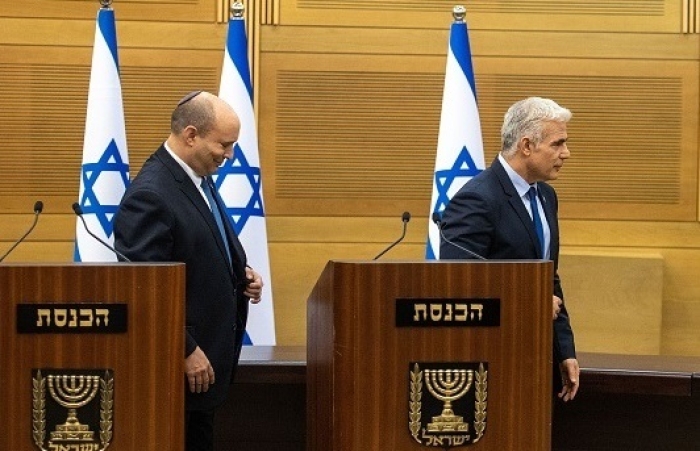 (CNSNews.com) – President Biden’s upcoming visit to Israel, his first as president, will be to a country in the throes of a fresh political crisis, after Prime Minister Naftali Bennett confirmed on Monday night that he aims to dissolve parliament ahead of elections in the fall.

The fragile multiparty coalition led by Bennett and Foreign Minister Yair Lapid lasted a little over a year, but after losing its majority, weakened by several lawmaker defections, and with the opposition Likud pressing for no-confidence votes, Bennett and Lapid announced its effective end.

At a press conference they said they would bring legislation within days to dissolve the Knesset, paving the way for the country’s fifth general election in less than four years.

The original coalition agreement split the prime ministerial post between Bennett and Lapid at the halfway point of their then-anticipated term of the government. As a result of Monday’s announcement Lapid will take over as prime minister from the time the Knesset is dissolved until the election, while retaining his foreign ministry portfolio.

Biden is scheduled to arrive in Israel on July 13 on a four-day tour that will also include stops in the Palestinian Authority self-rule area and Saudi Arabia.

“We have a strategic relationship with Israel that goes beyond any one government,” a spokesperson for the U.S. Embassy in Jerusalem said in a statement. “The president looks forward to the visit next month.”

Last week, with the coalition looking increasingly shaky, Lapid sought to dispel any concerns that the trip could be affected.

“The president’s relationship with Israel is way more important, significant and long-lasting than any political event,” he said at a foreign ministry briefing. “The U.S. is our greatest ally and the most important partnership and friendship we have.”

The Bennett-Lapid coalition always looked like an unlikely proposition, bringing together divergent parties – right-wing nationalists, leftists, centrists, and for the first time, an Islamist Arab Israeli party. It was derided by critics as an “anyone but Bibi” enterprise, a reference to a shared antipathy to veteran former prime minister and Likud leader Binyamin Netanyahu. 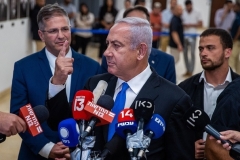 Former prime minister and Likud leader Binyamin Netanyahu speaks to the press at the Knesset on Monday. (Photo by Oren Ben Hakoon/AFP via Getty Images)

Despite an ongoing trial on bribery and other charges, an upbeat Netanyahu on Monday predicted that he and Likud would lead Israel’s next government.

He told reporters many Israelis were happy because they feel “the worst government in the history of Israel” is on its way out.

“This is a government that succumbed to terrorism, to blackmail, lost the ability to control the cities of Israel,” he said, citing “a sense of loss of personal security” and national pride, as well as a soaring cost of living.

“I intend to establish a broad, strong and stable national government,” Netanyahu said. “We are confident in our ability to win the election.”

During the latter Obama years, Netanyahu’s fervent opposition to the Joint Comprehensive Plan of Action (JCPOA) placed him at odds with a White House that touted the nuclear deal with Iran as a foreign policy triumph.

Despite enduring ties and strong defense cooperation, relations were also strained at times over the Palestinian issue. In its final weeks the administration controversially abstained, rather than vetoed a U.N. Security Council resolution describing areas, including the location in Jerusalem of the holiest site in Judaism, as “occupied Palestinian territory.”

By contrast, President Trump’s withdrawal from the JCPOA in 2018 was warmly welcomed by the Netanyahu government, as was his decision to recognize Israeli sovereignty over Jerusalem and move the U.S. Embassy there, a requirement in U.S. law which successive presidents had waived for almost two decades.

As president, Biden returned to the White House last year determined to revive the JCPOA – a troubling prospect for many Israelis, not just those in the Netanyahu camp. (Bennett also strongly opposes the nuclear deal, but said he would not pick a public fight over it.)

Months of talks in Vienna have yet to deliver an agreement, even as Iran continues to violate its commitments in the deal, and its “breakout” time – the time needed to produce enough weapons-grade uranium for an atomic bomb – has according to the State Department been reduced to “weeks or potentially even less.”

Whatever the state of politics in Israel, the threat posed by Iran to Israel and other U.S. allies and partners in the region is expected to feature prominently during Biden’s trip – both in Jerusalem and in Jeddah.

In a recent background briefing on the president’s trip, a senior administration official said that “containing Iran” and “deterring threats from Iran” would be on the agenda, with Biden making clear that the U.S. “is fully committed to supporting the territorial defense of our partners against threats from Iran.”

Israeli Defense Minister Benny Gantz revealed to lawmakers on Monday the existence of a new regional military partnership involving Israel and others, designed to counter threats from Iranian missiles and drones.

“This program is already operative and has already enabled the successful interception of Iranian attempts to attack Israel and other countries,” he said.