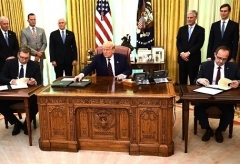 (CNSNews.com) – It took more than four decades for the first two Muslim-majority countries to recognize and normalize ties with Israel, and now that number has doubled in less than a month, with Kosovo’s decision to follow the United Arab Emirates in taking the step.

Making that observation at the White House on Friday, National Security Advisor Robert O’Brien called it “a very remarkable breakthrough.”

Adding to the significance, Kosovo has agreed to locate its embassy in Jerusalem. If it makes good on that pledge it would be not only the first Muslim-majority country to have an embassy in Israel’s capital – a status disputed by most governments – but one of the first countries of any stripe to follow the U.S. lead.

Meanwhile Serbia, which does have diplomatic ties with Israel and an embassy in Tel Aviv, has also agreed to move its embassy to Jerusalem by July of next year, and to open a commercial office in Jerusalem within weeks.

Both decisions were part of a broader U.S.-brokered breakthrough announced at the White House on Friday, as the feuding Balkan neighbors agreed to a process of economic normalization, a hoped-for first step towards an ultimate political agreement.

Speaking to reporters after the trilateral meeting, O’Brien drew attention to the Israel-Kosovo part of the agreement, calling it “another really signal accomplishment of President Trump.”

Jordan normalized relations with Israel in 1994, 46 years after the establishment of the State of Israel. Egypt had done so 15 years earlier. The UAE-Israel accord was announced at the White House on August 13. 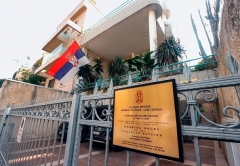 Under the agreement brokered by the Trump administration, Serbia has pledged to move its embassy in Israel from Tel Aviv to Jerusalem by next July. (Photo by Jack Guez/AFP via Getty Images)

To Serbia’s chagrin, roughly half of the U.N. member states, including the United States, recognize Kosovo. Russia, a close ally of Serbia which strongly opposed the NATO intervention, leads a bloc that doesn’t.

Led by special envoy Richard Grenell, former ambassador to Germany and acting director of national intelligence, the Trump administration got the neighbors to agree to focus on normalizing economic ties, including the opening up of border crossings, setting aside thornier political issues for now.

But, in keeping with its often-unorthodox approach to foreign policy, the administration persuaded Serbia to agree to one exception first – to not stand in the way of Israel recognizing Kosovo (and vice versa).

Israel welcomed with enthusiasm the twin achievements of another Muslim-majority country agreeing to normalize ties, and the prospect of two new foreign embassies in Jerusalem.

“Kosovo will be the first Muslim-majority country to open an embassy in Jerusalem,” said Prime Minister Binyamin Netanyahu. “The circle of peace and recognition of Israel is expanding and additional countries are expected to join it.”

Criticism, as anticipated, came from Palestinian leaders and secretary-general of the Arab League.

Turkey’s Islamist government also deplored both countries’ pledges to locate embassies in Jerusalem, and warned that in Kosovo’s case, it would harm its efforts to win further diplomatic allies in future. (Turkey is among the countries that recognize Kosovo’s independence.)

Also expressing dismay was the European Union, which has been engaged for years in attempts to resolve the Serbia-Kosovo dispute.

Serbia and Kosovo both aspire to join the E.U. someday (Serbia is a “candidate” and Kosovo a “potential candidate” for accession), and a spokesman for the E.U.’s executive Commission, Peter Stano, on Monday sounded a note of caution.

“There is no E.U. member state with an embassy in Jerusalem,” he said. “Any diplomatic steps that could call into question the E.U.’s common position on Jerusalem are a matter of serious concern and regret.”

After their trilateral meeting with Trump, Serbia’s Vucic and Kosovo’s Hoti held talks in Brussels on Monday – the latest in a series of E.U.-mediated negotiations that began in 2011 but have produced little lasting progress.

The E.U.’s “common position” on Jerusalem is that its status should be decided as part of an Israeli-Palestinian peace settlement.

On Twitter, Kosovo’s political leaders underlined their intention both to normalize relations with Israel, and to locate their embassy in its capital.

“My government is dedicated to open the embassy in Jerusalem, establish diplomatic relations and deepen bilateral relations,” reaffirmed Hoti after the U.S. visit, while President Hachim Thaci said, “Kosovo will keep its promise to place its diplomatic mission in Jerusalem.”

In an apparently unrelated move, Malawi’s president, a former Assemblies of God minister, in a state of the nation speech on Friday announced plans for the small southeast African country to establish an embassy in Jerusalem.