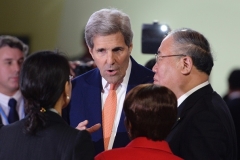 Then-Secretary of State John Kerry and China’s climate change envoy Xie Zhenhua, right, at the talks that produced the Paris climate accord in December 2015. (Photo by Miguel Medina/AFP via Getty Images)

(Update: The State Department on Tuesday confirmed that John Kerry will travel to Shanghai, China, and Seoul, South Korea from Wednesday to Saturday.)

(CNSNews.com) – Climate envoy John Kerry will become the first senior Biden administration official to visit China, the country whose relationship with the U.S. has been described as the most consequential in the world.

State media outlets in China responded to the prospect of a visit with cautious optimism, characterizing Kerry as a known entity, and a “veteran diplomat who values face-to-face personal diplomacy to reach consensus.”

Weeks after a tense first encounter between top Biden administration and Chinese officials in Alaska, Kerry will reportedly meet with Chinese climate envoy Xie Zhenhua in Shanghai in the coming days.

Neither government immediately confirmed reports about a planned trip, although White House press secretary Jen Psaki did not dispute them when asked at a press briefing on Monday about the expectations for Kerry’s “potential visit to Shanghai.”

“Well, certainly he’ll be focused on discussing climate and how we can work with leaders around the region to get control of our – the climate crisis,” she replied.

A State Department spokesperson said it had no travel to announce, but confirmed that Kerry has been in touch with Xie since they were appointed to their respective posts, “and we expect conversations between the two will continue, given that China is the largest emitter in the world.”

Then on Tuesday, the department announced that Kerry will travel to Shanghai as well as Seoul, South Korea, from April 14-17, 2021, “to discuss raising global climate ambition ahead of President Biden’s Leaders Summit on Climate April 22-23 and the 26th Conference of the Parties (COP26) to the United Nations Framework Convention on Climate Change later this year.”

Biden late last year named the former secretary of state and longstanding climate change advocate as special envoy, and after the inauguration Kerry returned to the international climate arena expressing “humility” and vowing to make up for “the absence of the last four years.”

Shortly after the 77-year-old took up his duties, Beijing in February appointed Xie, 71, to an equivalent post.

“Kerry’s possible visit proves that the current U.S. administration still has a cooperative facet in its diplomacy with China and is serious to push it forward,” Li said.

It noted in an editorial that the visit, if it takes place, will come “less than a month after the feisty exchanges in the face-to-face meeting between senior Chinese and U.S. diplomats in Alaska, sparked by the superciliousness displayed by the U.S. secretary of state and the national security advisor.”

The paper pointed out that China is marking the 50th anniversary of the “ping-pong diplomacy” that led to a thaw between Washington and Beijing and paved the way for President Richard Nixon’s historic visit the following year.

It opined that “climate diplomacy” could now provide the opportunity for the two countries to “join hands again for the common good of the two peoples and the world.”

Secretary of State Antony Blinken and his State Department have repeatedly described the U.S.-China relationship as a multifaceted one – with competitive and adversarial elements but also potentially collaborative ones.

There are deep differences between the two sides on a wide range of issues, including egregious rights abuses in Xinjiang, a clampdown on democracy in Hong Kong, tensions over Taiwan and the South China Sea, trade and cyber disputes, and dissatisfaction over China’s early handling of the coronavirus outbreak.

After the difficult encounter in Alaska, China announced that the two sides had agreed to set up a climate “joint working group,” although the U.S. disputed that.

Four days later, Kerry and Xie both participated in a virtual ministerial on climate action co-hosted by China, the European Union and Canada.

The two have interacted considerably in the past. Xie headed China’s climate negotiation team for more than a decade until 2018, a period that coincided with Kerry’s tenure as secretary of state.

Just three months after Kerry took up the top State Department post in 2013, the Obama administration launched a U.S.-China climate change working group initiative. Kerry and Xie interacted as the world’s two largest carbon emitters moved towards a joint climate change agreement in late 2014, with both pledging to cut emissions.

That agreement paved the way for the Paris climate accord in late 2015. President Trump in 2017 formally gave notice of withdrawal from the agreement, but Biden reversed the move hours after his inauguration.

The administration plans to host a virtual two-day Earth Day summit on April 22-23. In preparation for the event, Kerry traveled earlier this month to the United Arab Emirates, India, and Bangladesh.

Kerry: US Returning to Global Climate Action ‘With Humility For The Absence of The Last Four Years’ (Jan. 26, 2021)