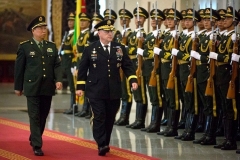 Gen. Mark Milley, then chief of staff of the U.S. Army (now chairman of the Joint Chiefs of Staff) reviews a People’s Liberation Army honor guard in Beijing with his Chinese counterpart, Gen. Li Zuocheng, in August 2016. (Photo by Mark Schiefelbein/AFP via Getty Images)

(CNSNews.com) – “China is clearly the most significant geostrategic threat” the United States faces today, Chairman of the Joint Chiefs of Staff Gen. Mark Milley said in comments broadcast on Wednesday, describing Beijing’s rise as one of the biggest “historical pivot points” the world has seen.

Interviewed on Bloomberg News’ David Rubenstein Show, Milley was responding to a question about the greatest military risk confronting the U.S.

“As we look to the future, and I think we are living in a historical epoch, actually,” he said. “We’re seeing a rise of a country that is unlike something that we’ve seen probably ever before. And it’s one of the great historical pivot points I think that we’ve ever witnessed, which is the rise of China.”

Milley said that over the four decades since Chinese leader Deng Xioping introduced his plans to reform and liberalize the economy, China had alongside its economic advance “developed a military that’s really significant.”

“As we go forward over the next 10, 20, 25 years there’s no question in my mind that the biggest geostrategic challenge to the United States is going to be China,” he said. “Of that I have no doubt at all.”

Milley did not discount other risks, noting that the Russians have “very significant military capabilities,” the North Korean and Iranian regimes “are still there,” and terrorists would continue to be “around for quite a while.”

“But I think China is clearly the most significant geostrategic threat we face.”

Elsewhere in the interview, Milley was asked about recent reports that China over the summer tested nuclear-capable hypersonic missiles.

He called the test “a very significant event” and “very concerning.”

Noting that some have described it as “a Sputnik moment,” Milley said it was certainly “very close to that.” 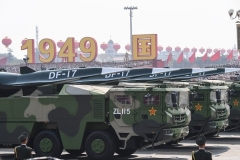 Hypersonic missiles fly in low-orbit at five times the speed of sound and are capable of zig-zagging in flight, potentially thwarting conventional missile defense shields.

Milley said the hypersonic projectile was just one weapons system in Beijing’s arsenal.

“The Chinese military capabilities are much greater than that. They’re expanding rapidly, in space, in cyber, and then in the traditional domains of land, sea, and air.”

At the Pentagon, press secretary John Kirby said Defense Secretary Gen. Lloyd Austin has expressed concern that China’s advancement of “certain capabilities” were doing little to decrease tensions in the region – coupled with “a foreign and defense policy approach that uses intimidation and coercion of neighboring nations to yield to China’s interests.”

“And so taken in sum, it reinforces for us the need to continue to treat the PRC as our number-one ‘pacing challenge,’ and the secretary’s committed to doing that.”

Austin has used the term “pacing challenge” frequently in relation to China since President Biden nominated the retired U.S. Army general as his secretary of defense.

Deputy Defense Secretary Kathleen Hicks explained during her confirmation hearing that “pacing challenge” refers to “the challenge that focuses us on where the bar is, where the measure is. And so in most capability areas, China is the one who setting the measuring stick for how advanced the capability is and how large a challenge it is for us to overcome.”

Kirby said there was a “suite” of China-related security issues that were of deep concern to the Pentagon.

He confirmed that the U.S. was pursuing hypersonic capabilities but said he did not want to “get into the specifics of testing and where we are.”

“We are laser focused on making sure that we have the operational concepts, the capabilities, the resources that we need to deal with this pacing challenge,” he said. “Specifically in the Indo-Pacific, but they have a global reach that we have to be careful about too, and mindful of.”

The U.S. Army’s program to deliver an operational hypersonic weapons capability by fiscal year 2023 is on track, the three-star general heading the effort reported recently.

Beijing’s Foreign Ministry has denied the reports of hypersonic missile tests, claiming that what was tested over the summer was in fact a “a space vehicle” that was undergoing a “routine test” to see if it could be re-used in China’s space program.

Ministry spokesman Wang Wenbin at a briefing on Friday said the U.S. was hyping China’s reported hypersonic weapons development even as it tested its own.

“We have noted that the U.S. expressed concerns over China’s normal spacecraft test and plays up the China threat theory,” he said. “Can the U.S. explain to the international community what it intends to do with its development of hypersonic weapons?”

“We urge the U.S. to fully respect other countries’ right to develop normal defense capacity, and stop seeking military buildup by hyping up the so-called military threat of others,” Wang said.