(CNSNews.com) – Weeks before he stepped down as President Obama’s secretary of state, John Kerry made an categorical prediction about the Middle East: Arabs will not pursue a “separate peace” with Israel in absence of peace between Israel and the Palestinians.

On the heels of Tuesday’s signing ceremony of normalization agreements between Israel and the United Arab Emirates and Israel and Bahrain, Kerry’s words are notable not just for how wrong they were, but for the level of absolute certainty he assigned to them.

“Let me tell you a few things that I’ve learned for sure in the last few years,” Kerry told an audience at the Brookings Institution’s Saban Forum, six weeks before President Trump’s inauguration.

“There will be no separate peace between Israel and the Arab world,” he said, adopting a didactic tone. “I want to make that very clear to all of you.”

“I’ve heard several prominent politicians in Israel sometimes saying, ‘Well, the Arab world is in a different place now, we just have to reach out to them and we can work some things with the Arab world and [then] we’ll deal with the Palestinians.’ No, no, no, and no.”

Kerry said his discussion with Arab leaders “even in the last week” had reaffirmed that “hard reality.”

“There will be no advance and separate peace with the Arab world without the Palestinian process and Palestinian peace,” he said. “Everybody needs to understand that.” 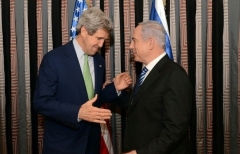 Kerry did not name names when it came to “prominent politicians in Israel” believing otherwise. But a little over two months earlier, Prime Minister Binyamin Netanyahu had told the U.N. General Assembly that, beyond Israel’s peace treaty relationships with Egypt and Jordan, “for the first time in my lifetime, many other states in the region recognize that Israel is not their enemy.”

“Our common enemies are Iran and ISIS,” Netanyahu said. “Our common goals are security, prosperity and peace. I believe that in the years ahead we will work together to achieve these goals, work together openly.”

The agreements signed at the White House on Tuesday are the basis for full recognition of and diplomatic relations with Israel by the two Arab nations – despite the fact that a settlement of the Israeli-Palestinian conflict remains elusive.

As part of the U.S.-brokered deal with the UAE, Netanyahu did undertake to suspend controversial plans to extend sovereignty over some of the territories disputed between Israel and the Palestinians.

Apart from that, the signed agreements contain no specific obligations relating to the Palestinian issue, beyond a commitment to continue undefined “efforts to achieve” a negotiated resolution.

Trump has said repeatedly in recent days that several additional Arab countries are moving towards normalizing ties with Israel. He said at a press conference Wednesday that he had spoken to representatives of two of them the previous day, “and they’re ready to trot.”

‘The core issue of instability in this region’

Early on in his tenure as Obama’s second-term secretary of state, Kerry heard from Arab counterparts in Jordan that the Israeli-Palestinian dispute was the “core” reason for regional instability.

Despite the Syrian civil war, jihadist violence in Iraq, the killing by al-Qaeda of dozens of hostages in Algeria, a continuing Libyan crisis since the Benghazi consulate attack six months earlier, and ongoing evidence or Iranian regime terror plotting abroad, he embraced the narrative telling reporters after the meeting that his interlocutors had told him “that the core issue of instability in this region and in many other parts of the world is the Palestinian-Israeli conflict.”

Kerry then launched a concerted effort to kick start talks between Israel and the Palestinians, an initiative that collapsed after nine months, in April 2014.

Relations between the administration and Israeli government became strained over the Iran nuclear deal – Kerry was a key architect, Netanyahu a leading critic – but would get considerably worse by the time Kerry left the State Department.

Israel, and U.S. lawmakers supportive of Israel, deplored the administration’s decision in December 2016 not to veto a U.N. Security Council resolution describing areas including the location in Jerusalem of the holiest site in Judaism as “occupied Palestinian territory.”

Kerry then gave a speech at the State Department explaining why the U.S. had abstained rather than veto the resolution, and largely blamed Israeli settlements on disputed territory for the failure of peace efforts.

Hitting back at the outgoing secretary of state, Netanyahu countered that the root of the conflict remains “the persistent Palestinian refusal to recognize a Jewish state.”