Kerry Optimistic China Will Join Effort to Achieve Climate Goals in Glasgow; Xi May Not Attend 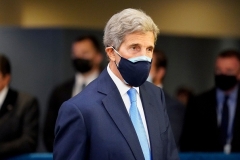 (CNSNews.com) – Chinese President Xi Jinping looks unlikely to attend the upcoming U.N. climate conference in Glasgow, but U.S. climate envoy John Kerry is optimistic that China, the world’s biggest emitter of greenhouse gases, will cooperate in the global effort he is championing.

“I am hopeful that President Xi is very much engaged and is personally making decisions, and personally committed,” Kerry told The Guardian.

Kerry pointed to a phone conversation between Xi and President Biden a month ago, during which climate had been discussed.

“There was a very clear commitment to work with the U.S. to achieve our goals,” the British paper quoted Kerry as saying. “We are very hopeful.”

Kerry last April became the first Biden administration official to visit China, a trip that ended with a joint statement, with pledges to cooperate together and with other countries “to tackle the climate crisis.”

But when he visited again in September, the reception was chilly: Beijing sent a junior official to meet face-to-face in the coastal city of Tianjin, and Kerry’s interactions with senior figures including Foreign Minister Wang Yi were relegated to video conference.

Wang lectured Kerry on the poor state of bilateral relations, telling him the U.S. had “made a major strategic miscalculation about China” and that China-U.S. cooperation on climate change could not be “divorced from the overall situation of China-U.S. relations.”

Kerry plans to make one further visit to China before the climate conference known as COP26 – the 26th “conference of the parties” to the U.N. Framework Convention on Climate Change – in Glasgow, Scotland at the end of October.

COP26 aims to secure commitments for ambitious emission-reduction steps, in order to meet the aims of the 2015 Paris climate accord – to prevent average global temperatures from rising more than two degrees Celsius above pre-industrial levels, and with an aspirational target of just 1.5 degrees above those levels.

As the biggest emitter of the gases blamed for global warming the steps China agrees to are crucial to the effort, but Beijing has yet to announce a new commitment on reducing emissions – known as a “nationally-determined contribution” – something the U.S., European Union, and others have done.

On the eve of the event in Glasgow, G20 leaders are due to meet in Rome, a gathering that is being seen as an important opportunity to deal with any last-minute differences ahead of the climate conference.

But as critical as China may be to the process, Xi appears not to be planning to attend the G20 meeting in person, and with attendance at COP26 also seen as unlikely, Bloomberg reported last week.

Xi has not traveled outside of China’s borders since the coronavirus pandemic emerged in Wuhan in late 2019.