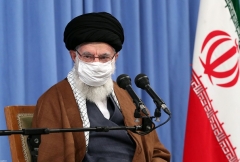 (CNSNews.com) – Iranian supreme leader Ayatollah Ali Khamenei declared on Sunday that Iran’s definitive – and “irreversible” – position on returning to compliance with the nuclear deal is that the U.S. must first lift all sanctions. Only once that step has been verified, he said, would the regime resume its commitments under the 2014 agreement.

“If they want Iran to return to its JCPOA commitments, the US should remove all sanctions in action,” Khamenei said in an address to air force officers, using the acronym for the deal’s formal title, the Joint Comprehensive Plan of Action. “After they have done this, we will check if the sanctions have truly been removed. Once this is done, we will resume our JCPOA commitments.”

Khamenei also ruled out any differences within the circles of power in Tehran on the issue.

“This is the definitive and irreversible policy of the Islamic Republic,” he said. “All of the country’s officials are unanimous on this, and no one will deviate from it.”

Foreign minister Javad Zarif, who helped to hammer out the deal in marathon talks with then-Secretary of State John Kerry, reinforced that stance, telling Iranian media Sunday that Iran would not renegotiate the JCPOA.

Underscoring the reality of the impasse, President Biden told CBS News that the U.S. will not lift sanctions before Iran makes good on its nuclear accord obligations.

“Will the U.S. lift sanctions first in order to get Iran back to the negotiating table?” CBS Evening News anchor Norah O’Donnell asked Biden.

The interview was recorded on Friday, to air ahead of the Super Bowl on Sunday.

The 2014 agreement, negotiated between Iran and the P5+1 group – the U.S., Britain, France, Russia, China and Germany –  offered Tehran sanctions relief in return for curbs on its nuclear energy program, in a bid to prevent the regime from acquiring nuclear weapons.

President Trump called it the worst deal he had ever seen, and withdrew in mid-2018. In response the regime began to abandon its obligations, breaching the limits, in quantity and levels of enrichment, of enriched uranium stockpiles allowed.

Early this month the International Atomic Energy Agency confirmed that Iran has begun to install and enrich uranium with more advanced centrifuges than those permitted under the JCPOA.

On Friday, White House press secretary Jen Psaki reiterated that Biden has pledged to return to the deal, once Iran returns to its commitments, and will “then use that as a platform to build a longer and stronger agreement that also addresses other areas of concern” – a reference to issues such as Iran’s ballistic missile programs and its overt and covert military intervention in regional conflicts.

She said any such moves would be done in partnership with the P5+1 parties, and in consultation with Congress.

In his remarks Sunday, Khamenei pointed figures at both the U.S. and the European parties to the deal, and ridiculed the notion that they could now set conditions.

“On the issue of sanctions, first of all, no one in the Islamic Republic believes what those incompetent prattlers say – whether they are in European countries or in the U.S.,” he said. “Secondly, logically speaking, the United States and the three European countries, which have violated all their commitments under the JCPOA, do not have any right to set conditions on the nuclear deal.”

The only party with a right to set conditions was Iran, he said, as it had honored its undertakings.

Khamenei also took a personal dig at Trump, and at John Bolton, the former top U.S. arms control official and ambassador to the U.N. who served as Trump’s national security advisor for 17 months until the fall of 2019.

“One of those first-rate fools said that they would celebrate New Year 2019 in Tehran,” he said without naming Bolton. “That person has been sent to history’s trash can, and his boss has also been kicked out of the White House with disgrace. But the Islamic Republic is still standing strong on its feet.”

(At a Iranian opposition rally in Paris in 2017 Bolton, not serving in the administration at the time, said it should be U.S. policy to ensure that the regime in Tehran does “not last until its 40th birthday,” that is, 2019.)

“The U.S. is truly declining, and this has distressed and stunned some of their allies in the region,” Khamenei said. “The world is watching U.S. power decline, internally and internationally.”