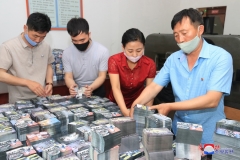 A photo posted on a North Korean propaganda website at the weekend purportedly shows propaganda pamphlets being prepared for cross-border distribution by hot-air balloon. (Photo: Uriminzokkiri)

(CNSNews.com) – Ahead of this week’s 70th anniversary of the outbreak of the Korean War, the North Korean regime says it is printing millions of propaganda leaflets to be carried by hot-air balloon across the world’s most heavily-armed border, a tit-for-tat response to a long running campaign by anti-Pyongyang activists in the South.

In a related move, North Korean soldiers have been observed reinstalling stacks of loudspeakers near the border, designed to bombard South Korean residents within earshot with propaganda messages.

Public address systems on both sides of the border were dismantled as part of a series of commitments to halt “all hostile acts” along the Demilitarized Zone (DMZ), agreed during a summit between Kim Jong Un and South Korean President Moon Jae-in in 2018.

Religious, human rights and defector civil society groups in the South have for years carried out leafletting campaigns, aiming to reach ordinary people in the world’s most shut-off country with messages challenging the regime, highlighting its abuses, and extolling the successes of South Korea.

North Korea’s anger over the issue – and particularly what it regards as insults “hurting the dignity of the Supreme Leadership,” led last week to the literal blowing up of a liaison office north of the DMZ, a symbolic facility established two years ago to expedite North-South contacts. It has also severed all cross-border communication links.

Evidently not satisfied that its response so far has been sufficient, and claiming that the North Korean people are filled with hatred and bent on revenge, the regime announced its plans in characteristic style.

“Amid the soaring will and zeal of all the enraged people of the whole country to retaliate against those who hurt and made an intolerable insult about their most sacred mental core and to make them pay dearly for their crime, the preparations for the largest-ever distribution of leaflets against the enemy are almost complete,” said a statement carried by state media.

It said 12 million leaflets, bearing messages “reflective of the wrath and hatred of the people from all walks of life,” have already been printed in Pyongyang alone, while “millions” more were being produced across the country.

Meanwhile more than 3,000 balloons have been prepared for the distribution.

“Our plan of distributing the leaflets against the enemy is an eruption of the unquenchable anger of all the people and the whole society,” it said. “The aspiration and demand of the people are just law and practice, and nothing can block the strong trend of public sentiment.”

“South Korea has to face the music. Only when it experiences how painful and how irritating it is to dispose of leaflets and waste, it will shake off its bad habit. The time for retaliatory punishment is drawing near.”

The statements from the regime have given no indication when the leafleting will begin, although favorable winds will be necessary. Thursday marks the 70th anniversary of the day the Korean War began, so Pyongyang may have plans for then. 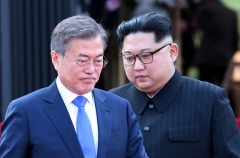 Inter-Korean tensions have soured significantly since the goodwill generated by the summit between Kim Jong Un and South Korean President Moon Jae-in in April 2018. (Photo by Korea Summit press pool/AFP via Getty Images)

In Seoul, a military spokesman told a briefing that events north of the DMZ were being closely monitored round-the-clock.

“In preparations for diverse possibilities, we maintain a firm readiness posture,” Col. Kim Jun-rak was quoted as saying.

The military says it has observed the reinstalling of loudspeaker stacks in more than ten of the around 40 locations in the North where they stood before being dismantled after the historic 2018 summit.

South Korea’s government has initiated legal action against two civil society groups involved in the leafleting-by-balloon campaign, prompting some critics to accuse it of violating freedom of expression. (The drive has continued undeterred, with activists reportedly launching balloons as recently as Monday night.)

Regardless, North Korea has not been mollified by South Korea’s actions, accusing it of “cunning word play.”

In response to an appeal from Seoul for it to reconsider the leafleting plans, the ruling party department dealing with inter-Korean relations said it was “absurd” for South Korea to argue that the campaign would violate the North-South agreement.

“Given their own wrongdoings, how dare they utter such words as regret and violation? As for their impudence, no one can rival them in it and they are the top-class brazenfaced guys,” the United Front Department said in a weekend statement.