Kirby: ‘I Take Issue With The Premise That We Gave a Whole Country to Terrorist Groups’ 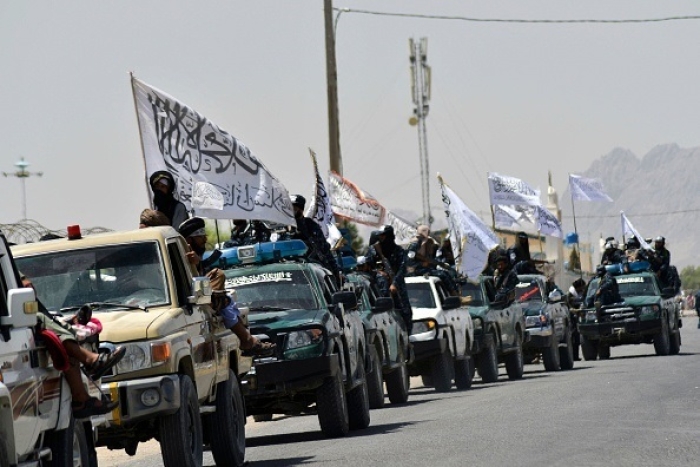 A convoy of Taliban fighters in Kandahar in September 2021. (Photo by Javed Tanveer/AFP via Getty Images)

(CNSNews.com) – Fielding questions on Tuesday about the killing of al-Qaeda leader Ayman al-Zawahiri, National Security Council Coordinator for Strategic Communications John Kirby rejected a suggestion that the Biden administration handed over Afghanistan to terrorists a year ago.

After Zawahiri was killed in a CIA drone strike on a house in downtown Kabul on Sunday, Secretary of State Antony Blinken accused the Taliban of having violated a 2020 agreement with the U.S. by “hosting and sheltering” the world’s most-wanted terrorist.

During a briefing at the White House, Kirby clashed with Fox News’s Peter Doocy over al-Qaeda’s presence in Afghanistan, a year after its longstanding ally, the Taliban, seized power.

“We know that the Taliban was harboring the world’s most wanted terrorist,” Doocy said. “You guys gave a whole country to a bunch of people that are on the FBI most wanted list. What did you think was going to happen?”

“I take issue with the premise that we gave a whole country to terrorist groups,” Kirby began. “I mean, again, I’d – I’d encourage you to ask – ”

“The Taliban was harboring the world’s number one terrorist,” Doocy interjected. “How is that not giving a country to a terrorist-sympathizing group …?”

Kirby said that the way the question was worded, “it makes it sound like we owned Afghanistan a year ago. It wasn’t our country – it was an independent, sovereign state.”

“And the president made a bold decision to end a war that had been going on for 20 years, because he believed then, and still believes now, that our national security interests are best met by meeting the threats of today, not the threats of 2001.” 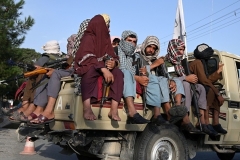 As the withdrawal of U.S. forces from Afghanistan drew to a conclusion last summer, Taliban fighters seized control of districts and provincial capitals – in some cases without a fight – ahead of President Biden’s August 30 target date for the drawdown to be completed.

Afghanistan’s elected government collapsed and its president fled as Kabul fell to the fundamentalist militia on August 15. The remainder of the month witnessed a U.S. military-overseen evacuation mission that saw 124,000 people flown out of Kabul airport by month’s end.

The Taliban then established a regime with a cabinet including sanctioned terrorists, among them “acting interior minister” Sirajuddin Haqqani, whose Haqqani Network faction is a U.S.-designated foreign terrorist organization. He is wanted by the FBI and the U.S. government is offering a reward of up to $10 million for information leading to his arrest.

In its 2020 Doha agreement with the U.S., the Taliban undertook not to allow “groups, including al-Qaeda, to use the soil of Afghanistan to threaten the security of the United States and its allies.”

It pledged that it would not cooperate with such groups threatening the security of the U.S. and its allies, would not host them or provide asylum or residence, would not allow them to recruit, train, or fundraise, and would not issue visas, travel permits or legal documents.

But any hopes that a severing of ties with al-Qaeda would follow were proven unfounded. A U.N. Security Council sanctions monitoring team reported last month that “Al-Qaeda leadership reportedly plays an advisory role with the Taliban, and the groups remain close.”

And U.S. officials confirmed this week that Zawahiri and his family had “relocated to a safe house in Kabul” earlier this year. The drone strike occurred in a central neighborhood within a mile or so of major Taliban regime ministries.

Asked at Tuesday’s briefing how the U.S. was going to respond to the Taliban’s violation of its Doha agreement commitments by sheltering Zawahiri, Kirby declined to “telegraph moves and decisions that we might make.”

“We’ve communicated very directly with Taliban leaders our views of their willingness, at some level of course, to harbor Zawahiri and his family,” he said.

Kirby noted that the regime claims to want a relationship with the West, legitimacy, financing, and international support

After U.S. forces withdrew last year, the administration and Pentagon officials said the U.S. would rely on “over-the-horizon” surveillance and counterterrorism capabilities to disrupt any terrorist threats emanating from Afghanistan.

Defense Secretary Gen. Lloyd Austin in congressional testimony defined such capabilities as “assets and target analysis that come from outside the country in which the operation occurs.”

Kirby confirmed that the strike on Zawahiri was “he first and only over-the-horizon counterterrorism strike we conducted in Afghanistan” since the withdrawal.

“This action demonstrates that without American forces on the ground in Afghanistan and in harm’s way, we still remain able to identify and locate even the world’s most wanted terrorist and then take the action to remove him from the battlefield,” he said.

He described the drone strike as “a perfect, clean example of what that [over-the-horizon] capability looks like.”