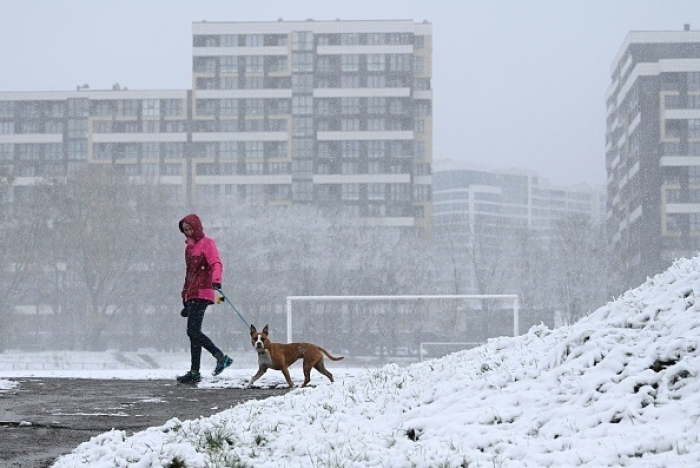 The first snowfall of the season arrives in the western Ukrainian city of Lviv on Thursday. (Photo by Yuriy Dyachyshyn / AFP via Getty Images)

(CNSNews.com) – As Russia on Thursday launched more airstrikes targeting Ukrainian energy facilities, the Kremlin made clear that the onset of wintry weather would not affect its invasion, now in its 267th day.

“The special military operation is continuing, it does not depend on climatic or weather conditions,” Kremlin spokesman Dmitry Peskov told reporters. “Its goals must be achieved.”

Thursday’s missile and drone strikes targeted power grid and gas infrastructure in the south and east of the country, and at least seven people were killed when a missile hit a residential building near Zaporizhzhia in southern Ukraine, authorities said.

In his nightly video message to the nation, Ukrainian President Volodymyr Zelenskyy reported that ten million Ukrainians were without electricity supplies.

The latest air assault came two days after the most intense barrage since the invasion began, when more than 100 missiles and drone strikes targeting energy infrastructure left millions of people without power.

The TASS state news agency said Peskov’s comment came in response to a question about large numbers of Ukrainian civilians denied electrical power and heating as a result of the missile strikes, even as the weather deteriorates.

“The infrastructure facilities in question were directly or indirectly related to the military potential of Ukraine and the Ukrainian regime,” he said.

TASS said Peskov blamed the suffering of Ukrainian civilians on Kyiv’s refusal to enter into negotiations with Russia.

“The unwillingness of the Ukrainian side to resolve the problem and to enter into negotiations, its refusal to seek common ground, are the root causes of the consequences.” 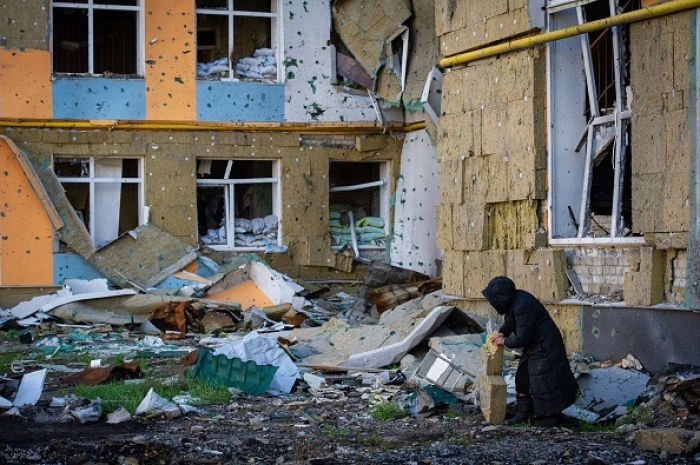 A Ukrainian woman removes a piece of wall insulation from a war-ravaged building in Izium to use to warm her house as winter approaches. (Photo by Scott Peterson / Getty Images)

In his video address to the G20 summit in Bali earlier this week, Zelenskyy accused Russia of trying to “turn the cold into a weapon against millions of people” by destroying parts of its energy infrastructure with “Russian missiles and Iranian drones” as winter looms.

He also mapped out a path ahead to bring the conflict to an end – “our vision of the path to peace” – including Moscow agreeing to respect Ukraine’s territorial integrity, withdrawing its armed forces from the country, and paying compensation for the damage inflicted by the invasion.

Zelenskyy stressed, however, that Ukraine should not be asked to make “compromises with its conscience, sovereignty, territory and independence.”

After the speech, Russian Foreign Minister Sergei Lavrov – who attended the summit in the absence of President Vladimir Putin – told Russian media outlets that Zelenskyy was refusing to negotiated and “putting forward conditions that are obviously unrealistic.”

Chairman of the Joint Chiefs of Staff Gen. Mark Milley said on Wednesday the U.S. assesses that more than a quarter of Ukrainian civilians were without power as a result of intentional Russian targeting of the power facilities.

“The deliberate targeting of the civilian power grid, causing excessive collateral damage and unnecessary suffering on the civilian population, is a war crime,” he told reporters.

“With the onset of winter, families will be without power, and more importantly, without heat. Basic human survival and subsistence is going to be severely impacted and human suffering for the Ukrainian population is going to increase.” 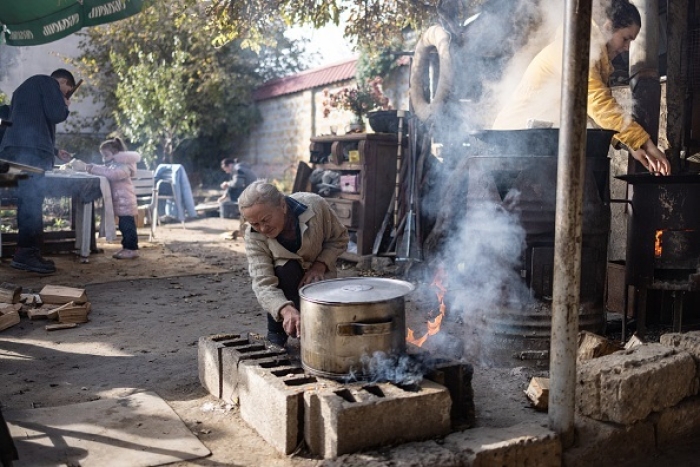 Ukrainians in an area near Kherson which the conflict has left without power, heat, or water, cook food on an outside fire. (Photo by Andrii Dubchak / Donbas Frontliner via Zaborona / Global Images Ukraine via Getty Images)

Milley said Russia could end the war immediately, “but they won’t.”

“They’re going to continue that fight into the winter, as best we can tell, and we, the United States, on the direction of the president and the secretary of defense, we will continue to support Ukraine for as long as it takes to keep them free, sovereign, independent with their territory intact.”

Meanwhile the International Atomic Energy Agency (IAEA) expressed concern about the impact that the attacks on Ukraine’s power grid are having on the safety of nuclear power reactors, which require electricity for cooling.

(Exacerbating the broader power shortage situation, the plant also shut down its reactors, suspending delivery of electricity to households and factories.)

Grossi said power had since been restored to Khmelnytskyy, but the incident “clearly demonstrates that the nuclear safety and security situation in Ukraine can suddenly take a turn for the worse, increasing the risk of a nuclear emergency.”

Ukraine’s – and Europe’s – biggest nuclear power plant, Zaporizhzhia, has lost power several times during the conflict. The site is occupied by Russian forces, but operated by Ukrainian staff.

The IAEA’s 35-nation board of governors in a behind-closed-doors vote on Thursday passed a resolution calling on Russia to end all military actions at Ukraine’s nuclear facilities and to withdraw from the Zaporizhzhia plant.

Ukraine has a total of 15 reactors at four nuclear power plants, apart from the Chornobyl site which is undergoing a decades-long decommissioning process following the 1986 disaster.