A woman in Seoul walks past a television screen on Sunday showing a news broadcast with file footage of a North Korean missile test. (Photo by Jung Yeon-Je/AFP via Getty Images)

(CNSNews.com) – North Korea’s testing Sunday of a medium-range ballistic missile, its most provocative action since 2017, prompted warnings from Seoul and Tokyo that the Stalinist regime could be on the verge of abandoning its self-imposed moratorium on testing intercontinental ballistic missiles (ICBMs).

Sunday’s launch of a projectile into the East Sea (also known as the Sea of Japan) was the latest in a series of probing tests this month, as Kim Jong Un evidently seeks to get the attention of Western powers focused on the Russia-Ukraine situation.

The South Korean military said the missile, fired in a steep upward trajectory, reached an apogee of 1,240 miles, flying for 30 minutes before landing in the sea, some 500 miles from the launch site in the north of North Korea.

The regime's official KCNA news agency said the test had involved the “highest-angle launch system,” to ensure the safety of regional countries.

The launch of what experts say was likely a Hwasong-12 was the most ambitious show of force since North Korea in November 2017 tested a Hwasong-15 ICBM which it claimed brought the entire continental U.S. within range.

After Sunday’s launch South Korean President Moon Jae-in was quoted as telling a meeting of his National Security Council that Pyongyang has moved closer to scrapping its moratorium on testing long-range and ICBMs. A similar view was voiced by Japan’s foreign ministry.

“North Korea must immediately stop actions that create tensions on the Korean peninsula and instability in the regional situation while maintaining the moratorium,” Moon’s office said in a statement after the NSC meeting.

“There is a possibility that North Korea will test-fire an intercontinental ballistic missile or resume nuclear tests in the future,” Japan Times quoted a senior foreign ministry official in Tokyo as saying.

U.S. Indo-Pacific Command said in a statement it was consulting closely with Japan and South Korea.

“The United States condemns these actions and calls on the DPRK to refrain from further destabilizing acts,” it said, using an acronym for the Democratic People’s Republic of Korea, the regime’s formal name.

“While we have assessed that this event does not pose an immediate threat to U.S. personnel, territory, or that of our allies, we will continue to monitor the situation. The U.S. commitment to the defense of [South Korea] and Japan, remains ironclad.” 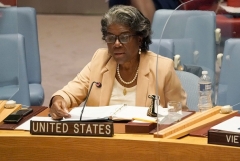 U.S. Ambassador to the U.N. Linda Thomas-Greenfield speaks at the Security Council meeting. (Photo by Timothy A. Clary/AFP via Getty Images)

Paralysis at the Security Council

Kim announced the moratorium three-and-a-half years ago, on the eve of his historic first summit with then-President Trump in Singapore.

Despite periodic threats by Kim to ditch it, the moratorium has held ever since, although Pyongyang has frequently tested cruise and short-range ballistic missiles, including on several occasions this month alone.

It also claimed, last September and again early this month, to have tested a “hypersonic” missile. Flying in low orbit at five times the speed of sound, the projectiles are highly maneuverable, potentially able to thwart conventional missile defense systems.

Under nine U.N. Security Council resolutions adopted since 2006, North Korea is prohibited from launching ballistic missiles of any range.

The U.S. Treasury Department on January 12 sanctioned five North Koreans whom it accused of obtaining material for the missile program from China and Russia.

But when the U.S. sought to widen that unilateral move and have the five be subjected to a U.N. travel ban and asset freeze, Russia and China blocked it in the Security Council. At a closed-door meeting China reportedly opposed even the release of a brief UNSC “press statement” responding to the provocations.

(Short of doing nothing, press statements are the weakest option available to the U.N.’s top decision-making body.)

The U.S. and six other council members, joined by non-member Japan, issued their own statement, describing North Korea’s actions as “unlawful” and “a threat to international peace and security,” and calling on the UNSC to be “unified in condemning” the violations of past resolutions.

U.S. Ambassador to the U.N. Linda Thomas-Greenfield on Sunday called the latest launch “provocative,” telling ABC’s “This Week” that the U.S. has been pushing for Security Council sanctions and would be looking at “other options for responding.”

“The United States, as you know, imposed unilateral sanctions in the past few weeks against the DPRK,” she said. “And we have pushed for sanctions within the Security Council.”

“And I will be engaging with our allies – the Koreans, as well as Japanese, who are also threatened by this – to look at other options for responding.”

Thomas-Greenfield said the Biden administration has been clear from the outset that “we are open to having diplomatic discussions” with Pyongyang.

“We’ve offered this over and over to the DPRK. And they’ve not accepted it. But we’re absolutely open to a diplomatic engagement without preconditions. Our goal is to end the threatening actions that the DPRK is taking against their neighbors.”