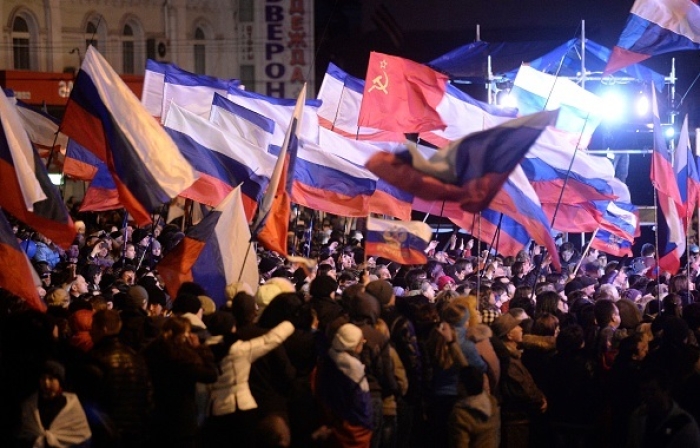 Pro-Russia Crimeans in Simferopol wave Russian and Soviet flags in celebration after a March 2014 referendum for the Ukrainian peninsula to become part of the Russian Federation. Putin annexed Crimea two days later. (Photo by Dimitar Dilkoff/AFP via Getty Images)

(CNSNews.com) – Russia’s military aim in eastern Ukraine is to “liberate” the self-proclaimed “people’s republics,” Russian Foreign Minister Sergei Lavrov said on Tuesday. But he also suggested that other regions seized by Russian forces may decide that they too do not wish to return to Ukrainian control.

In an interview with India Today television, Lavrov confirmed that Russia’s offensive in the Donbas region is now underway.

“This operation in the east of Ukraine is aimed, as was announced from the very beginning, to fully liberate the Donetsk and Luhansk republics,” he said. “It is beginning – I mean, another stage of this operation is beginning. And I am sure this will be a very important moment of this entire special operation.”

Lavrov reaffirmed that the “independence” of the so-called Donetsk and Luhansk People’s Republics (DPR and LPR) is a non-negotiable for Russia. He also recalled that when President Vladimir Putin recognized them in February he did so within the borders claimed by the separatists – comprising significantly more territory than actually under separatist control at that stage.

Lavrov confirmed that in the case of the DPR, that claimed territory includes Mariupol, the besieged coastal city that has been the most fiercely contested location since the invasion began in February.

India Today’s Geeta Mohan pointed out that Russia has appointed mayors in some cities that fell to its troops early in the invasion, including Melitopol and Berdyansk. (Both lie in the strip of territory that Russia is evidently set on capturing, in order to obtain a “land bridge” linking Russian-occupied Crimea with the DPR and LPR and the Russian border east of Mariupol.)

“There are mayors that have been appointed now by Russia, in Berdyansk and Melitopol,” Mohan said. “And they are saying that they will hold referendums, that they are not going to go back to Ukraine. Is that the plan?

Mohan said that could mean that Russia ends up retaining a large chunk of Ukraine’s coastline – “Ukraine will not have a navy.”

Lavrov said people in those areas had been suffering for eight long years at the hands of “neo-Nazis” in Kyiv who prohibited them from speaking Russian or commemorating the Soviet heroes of World War II.

“And now, when they have thrown away those neo-Nazis, and say that now we will decide who will be running the place – this is our mayor, this is our legislature – I believe this is the manifestation of democracy after so many – after so many years of oppression.”

Lavrov  reiterated that Russia has no plans for “regime change” in Kyiv, but that it wants “the Ukrainians themselves to decide how they want to live.” 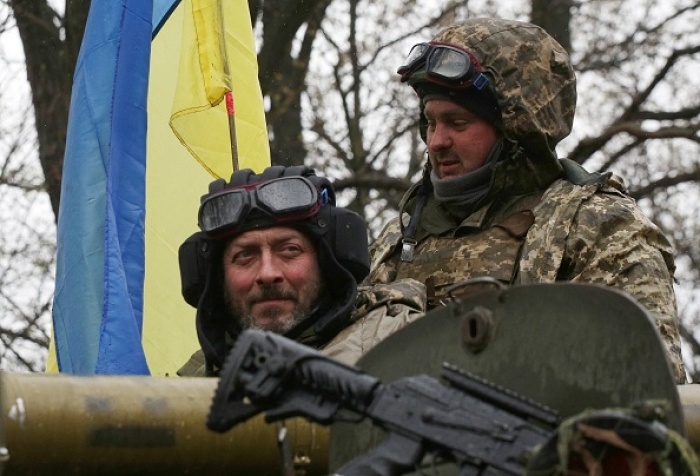 Ukrainian soldiers near the front line of the fighting against the invading Russian forces in Izyum district, Kharkiv region on Monday. (Photo by Anatolii Stepanov / AFP via Getty Images)

‘No plans of occupying Ukrainian territories’

Putin annexed Crimea after a March 2014 referendum that was not recognized by the international community. Two months later Russian-backed separatists in Donbas organized referendums on “independence” for the DPR and LPR. Putin last February recognized the two “people’s republics,” days before launching his invasion.

The Kremlin has said consistently since the war began that Russia has no intention of holding on to Ukrainian land.

A boilerplate sentence at the end of virtually every news item on the war published by the TASS state news agency reads, “The Russian leader stressed that Moscow had no plans of occupying Ukrainian territories, noting that the operation was aimed at the denazification and demilitarization of Ukraine.”

Should Russia and/or its proxies end up controlling the entire Donetsk and Luhansk regions, Crimea, and territory west of Donetsk and Luhansk running from Kharkiv south/southwest to the Black Sea, Ukraine will have lost more than a quarter of its total territory, including much of its access to the sea.

As Russian forces escalate their offensives in the east, a senior Department of Defense official briefing on background on Tuesday said Ukrainian forces were “clearly fighting back.”

The official said it was the Pentagon’s assessment that the Russian forces want to “move up from Mariupol and down from the Kharkiv area” and so cut off the Donbas.

“They have not been able to make the northerly moves out of Mariupol because they’re still fixed in Mariupol,” the official said. “We’re not predicting it will happen, but if they’re able to take Mariupol, that would free up manpower and resources that they have dedicated to that fight to then do other things in the Donbas region.”

That the Russians would achieve their aim was far from assured, however.