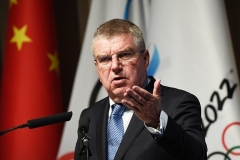 (CNSNews.com) – A bipartisan group of U.S. lawmakers is urging the International Olympic Committee to “immediately clarify its policies on athletes’ freedom to speak” during the upcoming Beijing Winter Games, after organizers warned that participants who express themselves in ways that violate Chinese laws will be “subject to certain punishment.”

The Switzerland-based IOC, which some human rights advocates charge should never have granted hosting rights in the first place to a country accused of egregious abuses, has yet to respond to press queries about the lawmakers’ call.

Senior 2022 Beijing Organizing Committee official Yang Shu was quoted as telling a virtual briefing organized by the Chinese Embassy in D.C. this week, “Any behavior or speech that is against the Olympic spirit, especially against the Chinese laws and regulations, are also subject to certain punishment.”

“Any expression that is in line with the Olympic spirit I’m sure will be protected,” said Yang, the committee’s deputy director general of international relations.

(The “Olympic spirit” is an often-cited but vaguely-defined concept. The Olympic Charter states, “Every individual must have the possibility of practicing sport, without discrimination of any kind and in the Olympic spirit, which requires mutual understanding with a spirit of friendship, solidarity and fair play.”)

Longstanding IOC rules prohibit any type of “demonstration or political, religious or racial propaganda” at an Olympic site or venue. The prohibition did not apply to athletes’ actions outside of the official locales, such as their online and social media postings.

However, changes to the guidelines, introduced last year after a consultation process, extended opportunities for athletes to express themselves at Olympic venues.

For example, they can do so in the venues' mixed zones including during media interviews, and – significantly – “on the field of play prior to the start of the competition,” provided the expression or gesture is “not disruptive” and does not target “people, countries, organizations and/or their dignity.”

The Chinese Communist Party is highly sensitive to outside criticism of its human rights record, and intolerant of sentiment supporting greater freedom for Tibet, democracy in Hong Kong, or critical of mass-scale atrocities against minority Uyghurs in Xinjiang.

They said the position stated by Yang “directly contradicts commitments made by the IOC at an October meeting with members of the U.S. Congress, where IOC representatives provided explicit assurances of their commitment to protect athletes if they are prevented from speaking out freely on human rights during the Beijing games.”

The lawmakers cited the changed IOC guidelines, saying the rule “explicitly states that athletes and participants are free to speak on sensitive matters in broadcast and media centers, in interviews, on social media, and during press conferences.”

“That freedom extends to issues such as the PRC’s genocide against Uyghurs and members of other ethnic and religious minorities, repressive surveillance practices, or the dismantling of freedoms in Hong Kong.”

“Given the latest troubling comments by the Beijing Organizing Committee, we call on the IOC to issue a public reaffirmation of its commitment to protect free speech during the Games, and to clarify what actions it will take to protect athletes if the organizing committee or local authorities try to silence them,” the lawmakers said.

Asked about reports quoting Yang’s remarks about punishment for athletes who violate Chinese law, a foreign ministry spokesman said they were designed to “attack and discredit China.”

Zhao Lijian said it was his understanding that the IOC “has published a statement on the ban on political protests, which asks Olympic athletes not to protest at any Olympic venues or podiums by taking a knee or in other forms.”

“We hope certain media would not take things out of context and maliciously hype them up to attack and discredit China,” he said. “I want to reiterate that China welcomes all athletes to the Beijing Winter Olympic Games, and will ensure the safety and convenience of all Olympians.”

The games, which begin on February 4, have been heavily impacted by the coronavirus pandemic, with attendance limited to selected Chinese citizens and participants to be kept within a bubble or “closed loop” system, undergoing daily testing for COVID-19.

Citing concerns about Beijing’s human rights record, the United States and a handful of other democracies are supporting a diplomatic boycott of the games, allowing athletes to compete but sending no official government delegations.