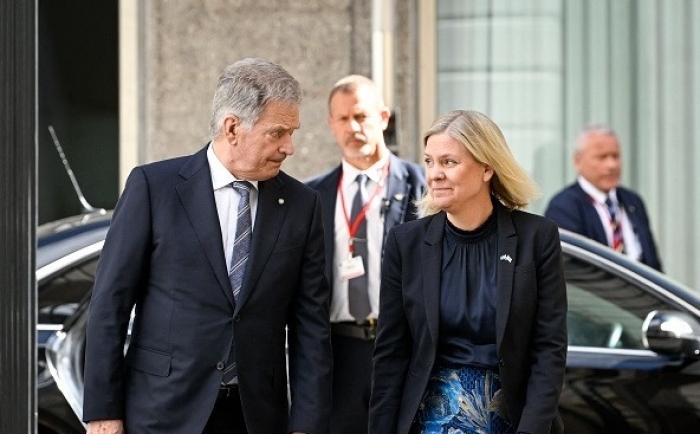 (CNSNews.com) – Finland and Sweden are formally filing their applications to join NATO at its Brussels headquarters on Wednesday, and a day later their leaders will visit the White House for what is expected to be a firm endorsement from the transatlantic alliance’s most powerful member.

President Biden will host Swedish Prime Minister Magdalena Andersson and Finnish President Sauli Niinisto, to discuss their “NATO applications and European security, as well as strengthening our close partnerships across a range of global issues and support for Ukraine,” the White House said.

Finland’s parliament after a 14-hour debate on Tuesday approved the government’s plan to apply to join NATO in a 188-8 vote. The Finnish and Swedish foreign ministers the same day signed their governments’ separate applications to join the alliance, to be handed to NATO secretary-general Jens Stoltenberg on Wednesday.

Russia’s invasion of Ukraine has prompted a dramatic shift away from long-held policies of military non-alignment for the Nordic neighbors. Already close partners of NATO, their admission could be swift – but not unless Turkish President Recep Tayyip Erdogan drops his opposition.

Erdogan accuses Sweden and Finland of harboring “terrorists” – the Kurdistan Workers’ Party (PKK) and supporters of the U.S.-based self-exiled Turkish cleric Fethullah Gulen – and says he also objects to admitting to NATO any country that has targeted Turkey for sanctions. E.U. member-states including Finland and Sweden suspended arms sales to Ankara in 2019 over its military offensive against Kurds in northeastern Syria.

After raising objections on Friday, Erdogan underlined them on Monday, saying the Swedes and Finns “should not bother” visiting Turkey to try to persuade it to change its stance.

Turkish state media, citing justice ministry officials, reported that the two countries have refused to extradite 33 suspects wanted by Turkey over the past five years.

Turkey has been a member of NATO for 70 years, but its often abrasive president has troubled allies with some of his foreign policy positions, such as his military intervention in Syria, his support for the Palestinian terrorist group Hamas, and his purchase of the Russian-made S-400 missile defense system despite NATO opposition.

NATO allies including France and Germany were among those that suspended arms exports to Turkey over its Syrian offensive, and the U.S. sanctioned Turkey in 2019 over its S-400 purchase.

While Erdogan has seen little success in countering punitive actions or stances taken by countries already in NATO, decisions on new members require unanimity, providing him with leverage that he appears ready to use.

After Secretary of State Antony Blinken met with his Turkish counterpart Mevlut Cavusoglu and other NATO foreign ministers in Germany at the weekend, he declared himself “very confident” that allies would reach consensus over the Swedish and Finnish applications.

Asked on Tuesday whether Erdogan’s public reiteration of his objections had changed Blinken’s optimistic outlook, State Department spokesman Ned Price indicated that it had not.

“Our assessment of the sentiment among our NATO allies and within the NATO alliance has not changed,” he told a briefing. “We are confident that we will be able to preserve the consensus within the alliance of strong support for a potential application of Finland and Sweden.”

Blinken is scheduled to meet with Cavusoglu again on Wednesday afternoon, in New York, where both are attending a global food security ministerial.

U.S.-Turkey relations have been soured by a range of disputes, some involving the same issues Erdogan is raising with Finland and Sweden.

Although the U.S. has designated the PKK as a foreign terrorist organization, its support for Syrian Kurdish fighters which Ankara views as terrorists due to their links with the PKK has angered Erdogan, as have successive U.S. administrations’ refusal to extradite Gulen. Erdogan accuses the 81-year-old cleric, formerly a close ally, of masterminding a failed coup attempt in 2016.

Also unresolved is the row over Turkey’s purchase of Russian S-400 purchase and resulting U.S. sanctions, including Turkey’s removal from the F-35 joint strike fighter program.

Turkey is not the first NATO member to take advantage of the consensus requirement in furtherance of a perceived national interest.

Russia’s forceful opposition to Ukraine and Georgia joining NATO was a key factor in opposition from allies like Germany and France – leery of upsetting an important energy provider – to approving “membership action plans” (MAPs) for the two aspirants. Fourteen years later, they are still waiting.

Greece held up Macedonia’s accession for years over a dispute eventually settled when the Balkan country changed its formal name to the “Republic of North Macedonia” (Athens said its neighbor’s use of “Macedonia” implied a territorial claim to the northern Greek province of the same name.)

North Macedonia was finally allowed to join NATO in March 2020, 21 years after first being given a MAP, and 12 years after the alliance agreed that it had met the criteria for membership.

Sweden and Finland will be hoping to settle their differences with Turkey far more quickly.

During a visit to Stockholm on Tuesday, Niinisto said he had spoken to Erdogan about a month ago and the Turkish leader had at the time expressed support for Finland joining NATO.

“The statements from Turkey have changed and hardened very quickly in recent days,” Niinisto said, but added that he was optimistic the situation could be resolved through dialogue.

“We have a very strong anti-terrorist agenda and so on,” Karin Olofsodtter said during a virtual event on Monday hosted by the Center for European Policy Analysis, adding that most of the allegations Turkey is making “are simply not true.”