(CNSNews.com) –  Senior World Health Organization officials in early January expressed deep frustration behind closed doors about China’s lack of cooperation and transparency about the emerging coronavirus outbreak, according to leaked recordings obtained by the Associated Press.

Their reported comments stand in sharp contrast to WHO director-general Tedros Adhanom’s effusive public praise of China’s response – a stance that prompted some Republican lawmakers to call for his removal.

Accusing the WHO leadership of being beholden to Beijing, President Trump last month suspended U.S. funding pending a review, urged it to commit to major improvements, but then on Friday announced the U.S. – the agency’s biggest funder – would withdraw altogether.

Chinese scientists at the beginning of January quickly decoded the genome of the mysterious new virus, but authorities sat on the information for days before making it public.

On January 3, China’s National Health Commission ordered institutions not to publish any information related to the novel coronavirus, and instructed labs to transfer any samples they have to designated testing institutions, or to destroy them.

Government health bodies eventually published the sequence on January 12, and only on January 20 did a leading Chinese epidemiologist declare on state television that the virus was spreading between humans.

On January 23, authorities shut down Wuhan, but not before five million people – according to the city’s mayor – had left, scattering across the country and beyond ahead of the lunar new year holiday. The first coronavirus cases to be reported outside China – in at least 12 countries, including Thailand, Japan, and the United States – were all people who left Wuhan between January 6 and the lockdown on January 23.

The leaked recordings of internal WHO meetings in early January reveal unhappiness with China’s handling of the fast-developing situation, at a critical time, including its withholding of crucial genomic and patient data and evident reluctance to provide more than the minimal information required. 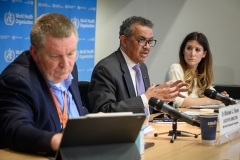 A number of the reported comments come from Michael Ryan, director of WHO’s emergencies program, and Maria Van Kerkhove, a WHO infectious diseases epidemiologist, both of whom have become familiar faces alongside Tedros during the agency’s regular coronavirus briefings.

In the second week of January, Ryan voiced concern about history repeating itself, pointing to the outbreak of the SARS coronavirus in China in 2002-3.

“This is exactly the same scenario, endlessly trying to get updates from China about what was going on,” the AP report quoted Ryan as telling colleagues. “WHO barely got out of that one with its neck intact given the issues that arose around transparency in southern China.”

(SARS eventually spread to almost 30 other countries, killing at least 770 people. Beijing was widely condemned for its response to that outbreak: Authorities played down the situation for months before admitting the extent of the crisis, apologizing, and sacking top officials. The mishandling of the outbreak led to the revision of the International Health Regulations, laying down requirements for countries to disclose information to protect global health.)

‘We have to be consistent’

Tellingly, Ryan noted during one meeting that WHO had publicly criticized Tanzania last September for not releasing detailed information on suspected Ebola cases.

“We have to be consistent,” AP quoted Ryan as saying. “The danger now is that despite our good intent ... especially if something does happen, there will be a lot of finger-pointing at WHO.”

That comment was prescient. Much of the criticism directed at WHO, and Tedros in particular, revolves around a perception of over-deference to China. Tedros, an Ethiopian former foreign and health minister, was backed by Beijing when he ran for WHO’s top job in 2017.

Critics were riled by Tedros’ lavish complimenting of China’s handling of the outbreak.

“I will praise China again and again,” he said at the end of January, “because its actions actually helped in reducing the spread of coronavirus to other countries.”

Weeks earlier, however, Van Kerkhove had said during an internal meeting, “We’re going on very minimal information,” according to the recordings. “It’s clearly not enough for you to do proper planning.”

A WHO spokesman said early Wednesday that the organization had no comment.

In an earlier statement to AP, WHO said, “Our leadership and staff have worked night and day in compliance with the organization’s rules and regulations to support and share information with all Member States equally, and engage in frank and forthright conversations with governments at all levels.”

Chinese foreign ministry officials have for months been repeating the talking point that China responded to the outbreak that emerged in Wuhan in a “transparent and responsible manner,” pointing as they’ve done so to public praise from WHO.

“Since the outbreak of COVID-19, the Chinese government has taken the most comprehensive, rigorous and thorough prevention and control measures in a timely manner to contain the spread of the epidemics, effectively cut off the chain of transmission of the virus, and made a major contribution to global public health security, which has been widely praised by the international community,” ministry spokesman Zhao Lijian said again on Monday.

As of late Tuesday, more than 6.3 million people around the world have been infected, and more than 379,000 deaths have been attributed to COVID-19, the respiratory disease caused by the coronavirus.