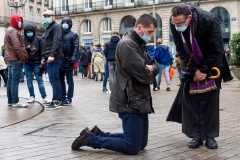 A Catholic priest hears a parishioner’s confession outdoors in the city of Nantes on Sunday. (Photo by Sebastien Salom-Gomis/AFP via Getty Images)

(CNSNews.com) – France is halfway through its second national COVID-19 lockdown, amid signs of growing resistance from sectors of society ranging from devout Catholics to bookstore owners.

As the Christmas season – in both its religious and shopping dimensions – approaches, Catholics wanting to attend Mass and businesses already hard-hit by an eight-week lockdown last spring are becoming increasingly restive, to the dismay of authorities.

In several cities including Paris, Nantes in the west of the country, and Strasbourg near the border with Germany, Catholic faithful wearing facemasks held outdoor demonstrations over the weekend, many holding signs bearing messages such as “Give up back the Mass” and “Let us pray.”

Some knelt in prayer on the sidewalk, hymns were sung, and priests heard impromptu confessions. In officially secular France, an estimated 63-66 percent of citizens are Christians, the overwhelming majority of them Catholics, according the CIA World Fact Book.

Corporate worship is among activities outlawed under the lockdown announced by French President Emmanuel Macron on October 30, due to run through December 1. Funerals and weddings with limited numbers of attendees are exceptions.

Last week France’s top administrative court, the Conseil d’Etat, rejected an appeal by Catholic bishops for public Mass to be made exempt, arguing that churches had not been sufficiently compliant with government health standards over recent months, and the fact that those attending Mass tend to be older – and therefore more vulnerable – was cause for additional concern.

As was the case during the previous lockdown in France, people are obliged to fill out a form to be carried when outdoors stating their reason for leaving home. Permissible reasons include shopping for essential items and getting some exercise (one hour maximum), and police carry out random checks.

Unlike the earlier restrictions, however, this time schools and workplaces deemed “essential” are permitted to remain open.

For many Catholics, Mass should unquestionably be viewed as “essential.”

“Without glasses, my eyesight declines,” read the message on one placard held by a woman at a rally in Strasbourg on Sunday. “Without Mass, my life declines.”

In a Twitter post on Sunday, Interior Minister Gerald Darmanin expressed sympathy for distraught Christians, and said he would meet with religious representatives on Monday at the behest of Prime Minister Jean Castex to discuss how authorities may be able to move ahead with allowing religious services in a way that was compatible with health measures. 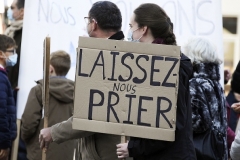 ‘Let us pray,’ reads a sign held by a Catholic worshipper during a rally in Strasbourg on Sunday. (Photo by Frederick Florin/AFP via etty Images)

“At the end of this weekend, I thank believers, and in particular Catholics, for their efforts and their understanding,” he said. “I know their pain.”

With more than 44,000 deaths blamed on the coronavirus, France accounts for the seventh-highest death toll in the global pandemic, after the United States, Brazil, India, Mexico, Britain, and Italy. The total number of confirmed cases reported by the national health ministry is approaching two million.

Although the government set December 1 as the end date for the second lockdown, it has indicated that that could be pushed back if the number of new cases does not fall. Castex said last week that bars and restaurants would likely remain closed beyond December 1.

Also irking many in France is the decision to exclude bookstores from “essential” businesses. (Online ordering is still possible.)

Some of the country’s top authors are offering to pay fines of bookstores that defy orders to close, with some having done so already.

In an open letter to Macron, author Didier van Cauwelaert wrote that limiting access to culture was jeopardizing France’s “precious freedom of speech.”

“Are book shelves really more dangerous for consumers than cheese and cosmetic departments?” he wrote. Van Cauwelaert asked Macron if he was aware that prohibiting the sale of books to visiting customers amounted to a death sentence for many bookstores already on their last legs because of the earlier lockdown.

November and December is a crucial period of the year for many retailers.

A recent IFOP survey indicated that French people are being considerably less compliant with lockdown measures this time around.

Sixty percent of respondents admitted having giving false reasons for going outdoors, compared to fewer than 40 percent during the early part of the first lockdown. Reasons for doing so included meeting up with family members, partners, or friends.

The survey also found higher levels of depression, anxiety and weariness this time.

Countries across Europe have implemented various forms of lockdown in recent weeks, as case numbers pick up.