Menendez: Early Concerns About Iran Nuclear Deal ‘Are Coming Back to Haunt Us’

(CNSNews.com) – Foreign Relations Committee chairman Bob Menendez (D-N.J.) said on Tuesday night that many of the concerns he aired in 2015 about the Iran nuclear deal were “coming back to haunt us in the year 2022,” and called for a new push to prevent Iran from becoming a nuclear weapons state.

Menendez said he had been “cautiously optimistic” about the Biden administration’s diplomatic efforts, but one year later, he has yet to hear what the parameters are of a “longer” and “stronger” deal which the administration said it would pursue – “or whether that’s even a feasible prospect.”

Attempts by the Biden administration to get both Iran and the U.S. to return to compliance with the Joint Comprehensive Plan of Action (JCPOA) are facing difficulties, with U.S. officials warning that time is running out.

In an hour-long speech on the Senate floor, Menendez, one of just four Senate Democrats to oppose the Obama administration’s deal in 2015, reexamined some of the concerns he raised at the time.

He said they included the fact that the JCPOA did not require Iran to completely dismantle its nuclear infrastructure, instead mothballing it temporarily, “making it all too easy too for Iran to resume its illicit nuclear program at a moment of its choosing.”

The regime was not required to destroy or permanently decommission centrifuges, or to shut down its uranium enrichment plant built covertly deep under a mountain at Fordow.

“Under the JCPOA, it was merely repurposed,” he said. “Now Iran is back in business at Fordow, spinning its most advanced centrifuges, and enriching uranium to a higher level of purity than before it entered into the JCPOA.”

Menendez said he had also expressed concern that the 2015 deal “did not empower international weapons inspectors to conduct the kind of ‘anywhere, anytime’ inspections needed to get to the bottom of Iran’s previous weaponization program.”

He had been unable to shake “a sense that the deal at the time itself was a best-case scenario, hinging on good-faith actors and overly optimistic outcomes – without enough consideration for the worst-case scenarios that might arise from the behavior of bad actors.”

“Today many of the concerns I expressed about the JCPOA back in August of 2015 are coming back to haunt us in the year 2022.”

Menendez made clear that although he opposed the accord, he also did not agree with the way President Trump’s withdrew from it in 2018.

After Trump took the step, and restored sanctions that had been eased under the agreement, Iran began a series of increasingly significant violations of the deal, including exceeding the limits, in both quantity and levels of purity, of enriched uranium stockpiles allowed under the JCPOA. 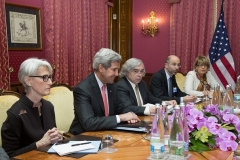 “Though I had my concerns with the JCPOA as I’ve expressed, I am also absolutely clear eyed, as everyone else in this chamber should be, that the way in which President Trump unilaterally withdrew from the deal, with no diplomatic plan for constraining Iran’s nuclear ambitions, without the support of any of our allies, without any kind of serious alternative, emboldened Iran to pursue its nuclear ambitions like never before,” Menendez said.

He noted that Iran’s violations of the deal had brought it to a place where its nuclear “breakout” time, according to analysts, is now down to around 3-4 weeks. (“Breakout” time is the amount of time needed to produce enough weapons-grade uranium for a bomb, once the decision to do so is made.)

“Today Iran has more fissile material, 2,500 kilograms, more advanced centrifuges, and a shorter breakout time – three to four weeks – than it had in 2015.”

“This is exactly why I was so concerned over the JCPOA’s framework of leaving the vast majority of Iran’s nuclear program intact,” he said. “This is how Iran was able to rapidly rebuild and advance its enrichment capabilities once the agreement fell apart. That was a serious mistake.”

Menendez called for proposals that he had laid out in 2015 to be revisited. Among them:

--Iran should be pressed to ratify the “Additional Protocol” of the nuclear Non-Proliferation Treaty, which would provide for a permanent agreement covering  the international inspection of suspect sites.

--There should be a ban on centrifuge research and development, he said, because that is what has enabled Iran to now be just four weeks away from crossing the nuclear threshold.

--Iran should shut down the Fordow facility, whose “sole purpose was to harden Iran’s nuclear program to a military attack. But if Iran has nothing to hide, and it’s all for peaceful purposes, why do you put it deep underneath a mountain?”

--A permanent agreement was needed, he said, pointing to the “sunset” clauses of the original deal that provided for various curbs placed on Iran’s uranium-enrichment activity to fall away 8.5, 10, and 15 years after the agreement took effect. (The sunset provisions were among the weaknesses cited by Trump administration in justifying the withdrawal from the JCPOA.)

In his lengthy address, Menendez also spoke about Iran’s ballistic missile program and its threat to the region. He displayed a map showing that the regime’s missile range brings within reach countries as far away as India, Greece, and Ethiopia, as well as many U.S. allies and partners nearer in.

Moreover, U.N. Security Council resolution 2231, which enshrined the nuclear deal, softened language in earlier resolutions, with Iran merely “called upon” not to carry out any activity relating to ballistic missiles capable of delivering nuclear weapons.

The earlier resolutions, which were overridden by resolution 2231, had said Iran “shall not” undertake any such activities.

The other three Democrats to oppose the JCPOA in the fall of 2015 were Sens. Chuck Schumer (N.Y.), Ben Cardin (Md.), and Joe Manchin (W.V.).  All Republicans opposed it.