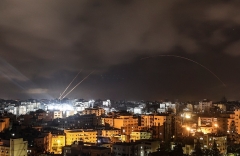 Rockets fired from the Gaza Strip rain down on Israel before the start of the ceasefire brokered by Egypt between Israel and Hamas on May 21, 2021. (Photo by MAHMUD HAMS/AFP via Getty Images)

(CNSNews.com) –  At an emergency meeting on Thursday, the Geneva-based Human Rights Council adopted a resolution establishing its first-ever, open-ended “commission of inquiry,” with Israel in its crosshairs.

The decision by the U.N.’s top human rights body adds a new layer to an already controversial anti-Israel record. Already Israel is the only country – out of 192 U.N. member-states – to be targeted by a permanent agenda item at the HRC, a singling-out that has drawn strong criticism from some Western democracies.

Thursday’s meeting was the ninth “special session” devoted to Israel – out of a total of 30 held in the HRC’s 15-year history. No special session has been called in response to rights abuses in China, Russia, North Korea, Iran, Cuba, Venezuela, Pakistan, or Saudi Arabia.

Called at the request of Pakistan on behalf of the Organization of Islamic Cooperation, the meeting focused on the 11 days of hostilities between rocket-firing Hamas terrorists and the Israel Defense Forces, which ended in a ceasefire that came into effect on May 21.

It should also investigate “all underlying root causes of recurrent tensions, instability and protraction of conflict, including systematic discrimination and repression based on national, ethnic, racial or religious identity.”

This will be the first CoI established by a HRC resolution that is open-ended. Others have all either run for a limited time period, or have had to be renewed annually. (CoIs established in the past include those dealing with Lebanon, Libya, Cote d’Ivoire, North Korea, Eritrea, Syria, South Sudan, Burundi, and Israel (established after the previous Israel-Hamas conflict, in 2014.)

The 47-member council adopted the resolution by 24 votes to nine, with 14 abstentions:

“Once again, an immoral automatic majority at the council whitewashes a genocidal terrorist organization that deliberately targets Israeli civilians while turning Gaza’s civilians into human shields,” he said.

The Palestinian Authority’s foreign ministry welcomed what it called a “landmark resolution.”

“Today, states that stood on the right side of history and voted in favor of the resolution affirmed the principle of accountability and respect for international rights,” it said. “They elevated and reaffirmed the centrality of the Human Rights Council and the multilateral system in general.”

US opposes the move, but US taxpayers may help to finance it

The United States is not currently a member of the HRC although the Biden administration reversed its predecessor’s policy and re-engaged with the council this year. It also plans to run for a seat in the fall.

Objecting to the calling of a special session in this instance, the U.S. did not participate even in an observer capacity, and in a statement afterwards the U.S. Mission criticized the outcome.

“The United States deeply regrets today’s decision by the Human Rights Council to establish an open-ended Commission of Inquiry into the recent violence between Israel and the Palestinians.”

“The actions of the Human Rights Council today do not contribute to peace,” it said. “They will not help bring about lasting solutions to the challenges in the region, nor provide greater dignity, freedom, or prosperity for either Palestinians or Israelis.”

“We will continue to advocate for Israel to be treated fairly in the Human Rights Council.”

Unless the U.S. government acts decisively to prevent it, however, U.S. tax dollars will help to fund the initiative.

The resolution calls for the U.N. secretary-general and the Office of the U.N. High Commissioner for Human Rights (OHCHR) to allocate the necessary resources for the Commission of Inquiry.

About 40 percent of funding for the OHCHR and HRC comes from the U.N. regular budget, 22 percent of which comes from U.S. taxpayers.

However, the Trump administration in fiscal years 2017-2020 withheld from U.S. contributions to the U.N. regular budget a proportionate amount that would have gone to the HRC.

Appropriations legislation signed into law in December 2019 prohibits funding for the HRC unless the secretary of state determines that the council is “taking significant steps to remove Israel as a permanent agenda item” and “taking actions to ensure integrity in the election of members.”

Neither of those conditions has been met.