National Security Advisor on Putin-Xi Declaration: They Didn’t Call Each Other ‘Allies’ 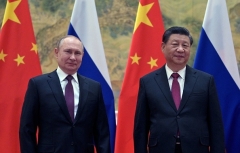 (CNSNews.com) – Russian President Vladimir Putin and Chinese President Xi Jinping have declared themselves to be in agreement on a broad range of issues, from NATO expansion to Taiwan, but National Security Advisor Jake Sullivan pointed out Sunday that in their lengthy declaration, “they didn’t use the word ‘alliance.’”

He also noted that the word “Ukraine” was not mentioned in the Putin-Xi statement issued after their Friday summit in Beijing, and argued that “that suggests that China is not so excited about cheerleading Russia on Ukraine.”

Sullivan’s take on the declaration came during an appearance on Fox News Sunday, where host Martha MacCallum said the Russian and Chinese leaders had said “we have a deep friendship, we have an unshakable alliance now, the two of us are in lockstep.”

Asked for the White House reaction to the joint statement, Sullivan replied, “Well, first, Martha, they didn't use the word ‘alliance’. They used some other phrases, but did not actually go so far as to call themselves allies.”

MacCallum countered by quoting from the joint statement: “Friendship between the two states has no limits. There are no ‘forbidden’ areas of cooperation.”

“Well, 5,000 words of that statement, in 5,000 words that the two leaders put down on that paper, the word ‘Ukraine’ does not appear – which suggests that China is not so excited about cheerleading Russia on Ukraine,” Sullivan said.

He then went on to talk about the U.S. and its allies needing to have confidence in themselves, as the West collectively accounts for more than half of the world’s GDP, compared to Russia and China which together comprise less than 20 percent.

Sullivan added that President Biden has over the past year rallied allies across the world “to stand together for a vision in which democracies will win the day over the years ahead, not autocracies.”

Citing U.S. convergence with partners in NATO, the European Union, and other groupings, he said, “we’ve already put points on the board and we are ready for the challenges that lie ahead.”

‘Superior to political and military alliances’

While Putin and Xi did not call use the word “alliance” in reference to Russia and China, they in fact declared that “the new inter-State relations between Russia and China are superior to political and military alliances of the Cold War era.”

And while the word “Ukraine” indeed does not appear in the Putin-Xi statement, it does make clear that China sides closely with Moscow in its standoff with the West over European security, including NATO expansion and weaponry deployments:

--The sides oppose further enlargement of NATO and call on the North Atlantic Alliance to abandon its ideologized cold war approaches, to respect the sovereignty, security and interests of other countries …

--The Chinese side is sympathetic to and supports the proposals put forward by the Russian Federation to create long-term legally binding security guarantees in Europe.

Elsewhere in the joint document, Putin and Xi expressed their opposition, other directly or by implication, to:

--economic sanctions (both countries are targeted by U.S. and European sanctions over a range of issues, among them human rights abuses against Uyghurs, the targeting of democracy campaigners in Hong Kong and Russia, and Russian interference in Ukraine)

--the West’s focus on an international rules-based order which they posit is at odds to the primacy of the U.N. Charter (“… attempts to substitute universally recognized formats and mechanisms that are consistent with international law for rules elaborated in private by certain nations or blocs of nations …”)

--Biden’s summit for democracy initiative (they deplored attempts by some countries to impose “democratic standards” on others, and the drawing of “dividing lines based on the grounds of ideology, including by establishing exclusive blocs and alliances of convenience”)

--the Asia-Pacific Quad (U.S., Japan, India, Australia) and AUKUS (U.S., Britain, Australia) partnerships. (“The sides stand against the formation of closed bloc structures and opposing camps in the Asia-Pacific region and remain highly vigilant about the negative impact of the United States' Indo-Pacific strategy on peace and stability in the region”)

--potential U.S. “plans to deploy intermediate-range and shorter-range ground-based missiles in the Asia-Pacific region and Europe”

--any form of independence for Taiwan (China maintains the island democracy is part of “one China” which will eventually be incorporated, by force if necessary)

--Western support for democracy movements in countries they view as falling within their sphere of influence. (“Russia and China stand against attempts by external forces to undermine security and stability in their common adjacent regions, intend to counter interference by outside forces in the internal affairs of sovereign countries under any pretext, oppose color revolutions, and will increase cooperation in the aforementioned areas.”)

China last week sided with a Russian attempt to prevent the U.N. Security Council from holding an open meeting on the Ukraine crisis. The effort failed, and in the ensuing debate Beijing’s ambassador called NATO a “product of the Cold War” and said that “Russia’s legitimate security concerns should be heeded and addressed.”