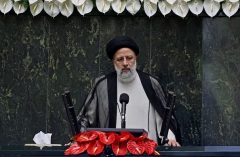 (CNSNews.com) – When Iran’s new president earlier this month nominated as his interior minister a man wanted by Argentina for suspected involvement in the deadliest terrorist attack in the country’s history, Buenos Aires voiced outrage.

Ebrahim Raisi ignored the protest. And then on Wednesday he named another man, wanted in connection with the same terrorist attack, as one of his vice presidents.

Raisi’s picks for interior minister, Ahmad Vahidi, and vice president for economic affairs, Mohsen Rezai, are not his only controversial cabinet nominations.

At least eight others, including his first vice president and his chief of staff, are subject to U.S. or European Union sanctions, in most cases for human rights abuses.

Raisi himself was sanctioned by the U.S. government in 2019, over human rights violations including his alleged leading role in the 1988 mass executions of dissidents, along with more recent abuses during his career in the regimes’ judiciary.

Vahidi and Rezai are among eight Iranians accused by Argentinian investigators in 2006 of involvement in the 1994 suicide truck bombing of a Jewish community center in Buenos Aires, in which 85 people were killed and hundreds more were wounded.

The investigation determined that the Iranian regime through the IRGC had tasked its Lebanese proxy, Hezbollah, to carry out the bombing that destroyed the Argentine-Israel Mutual Association (AMIA) building.

Rescue personnel search for survivors in the remains of the AMIA building on July 18, 1994. (Photo by Ali Burafi/AFP/Getty Images)

Argentina asked Interpol to issue “red notices” to facilitate the arrest of the eight Iranians, plus a ninth suspect, a Lebanese national.

On legal advice Interpol declined to do so in the cases of the most prominent of the nine – the late former President Hashemi Rafsanjani, former foreign minister Ali Akbar Velayati, and former Iranian ambassador to Argentina Hadi Soleimanpour.

It did, however, issue red notices for the remaining men, including Rezai, a former Islamic Revolutionary Guard Corps (IRGC) chief; and Vahidi, the former commander of an IRGC Qods Force special operations unit.

When Raisi earlier this month named Vahidi to his cabinet, the Argentinian government protested, noting that he was accused of having “played a key role in the decision-making and planning” of the AMIA bombing.

Pointing to the Interpol red notice, it said Vahidi’s elevation to a senior post in Tehran was “an affront to Argentine justice and to the victims of the brutal terrorist attack.”

It reiterated its demand for Iran to allow those suspected of involvement in the attack to be tried by “competent courts.” 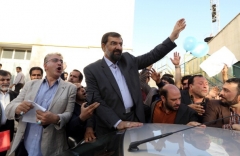 Mohsen Rezai is wanted in Argentina over the AMIA bombing. (Photo by Atta Kenare/AFP/Getty Images)

On the same day, Raisi announced he was appointing Rezai as vice president for economic affairs.

Argentina once again protested. It recalled that when an unnamed country inquired about a potential visit by Rezai in 2014, the Argentinian government had informed it that if he did visit, it would immediately request his extradition. (The country was South Korea, and the visit apparently never went ahead.)

Not only are Vahidi and Rezai still at large, both have held prominent positions in the regime since the terror attack.

Vahidi was defense minister in Mahmoud Ahmadinejad’s government from 2009-2013 and was later a member of the Expediency Council, a regime body that advises the supreme leader.

Rezai has served as secretary of the Expediency Council, and has run unsuccessfully for president several times. In 2018 he met with the visiting Nation of Islam leader, Louis Farrakhan.

A number of Raisi’s other cabinet nominees have been targeted for U.S. or E.U. sanctions. They include:

First vice president Mohammad Mokhber, the former head of a massive regime conglomerate known by the acronym Setad. The U.S. Treasury Department designated him for sanctions last January, saying the conglomerate he headed controls “large swaths of the Iranian economy, including assets expropriated from political dissidents and religious minorities, to the benefit of Supreme Leader Ali Khamenei and senior Iranian government officials.”

Chief of staff Gholamhossein Esmaili, a former judiciary spokesman sanctioned by the E.U. since 2011 for complicity in the “mas­sive detention of political protesters and covering up abuses performed in the jailing system.”

Vice president for paarliamentary affairs Mohammad Hosseini, a former culture minister and IRGC officer sanctioned by the E.U. since 2011 for complicity in “the repression of journalists”

Minister of Roads and Urban Development Rostam Qasemi, a former Qods Force officer and petroleum minister, sanctioned by the U.S. in 2019 for heading a shipping network directed by and financially supporting the Qods Force.

Culture Minister Ezzatollah Zarghami, a former head of the state broadcasting network, sanctioned by the E.U. in 2012 and the  U.S. in 2013 for rights abuses.

Oil Minister Javad Oji, sanctioned by the U.S. in 2020 for being part of a conglomerate which, according to the Treasury Department, is “used by the Supreme Leader Ali Khamenei to enrich his office, reward his political allies, and persecute the regime’s enemies.”

Chief Justice Gholam Hossein Mohseni Ejei, a former intelligence minister and prosecutor-general, designated by the U.S. in 2010 and the E.U. in 2011 for egregious human rights abuses.

Mughniyah, who was also an FBI “most wanted” terrorist blamed for attacks including the 1983 suicide bombing of the U.S. Marine barracks in Beirut, which killed 241 Americans, was killed in a bomb blast in Damascus in 2008.