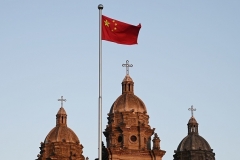 China’s national flag flies in front of a Catholic Church in Beijing which falls under the state-sanctioned 'patriotic' association. (Photo by Greg Baker/AFP via Getty Images)

The CCP’s program of “sinification” or “sinicization” of religion, a five-year plan running from 2018 through 2022, includes measures designed to ensure religious adherents’ loyalty to the CCP and Xi Jinping. In the case of Christianity, that means loyalty to the state should take precedence over belief in Jesus Christ.

Unsanctioned church buildings and crosses have been demolished, religious texts amended, and efforts made to “increase the proportion of core socialist values, patriotism and Chinese history into the curriculum of China-based theology institutes,” as the CCP organ Global Times reported when the program was first announced.

According to the U.S. Commission on International Religious Freedom (USCIRF), the sinicization effort targets in particular religions that are perceived to have “foreign” connections – Christianity, Islam, and Tibetan Buddhism – and aims to rid them of those influences.

“These policies require religious groups to support CCP rule and its overall objectives and interests, including by altering their teachings to conform to CCP ideology and adopting architectural and other changes to their sites and symbols,” the independent statutory watchdog said in its newly-released annual report.

“Both registered and unregistered religious groups and individuals who run afoul of the CCP face harassment, detention, arrest, and imprisonment.”

Beijing’s mass incarceration of minority Muslims Uyghurs and others in the western Xinjiang region has become an issue of global concern. China portrays the policies as part of a vocation- and training-focused deradicalization program; the U.S. government says they constitute genocide.

“Authorities broadly banned Tibetans, including students and government workers, from participating in traditional religious gatherings, and they detained and punished Tibetans for listening to the Dalai Lama’s teachings or possessing his portrait,” it said, in reference to the exiled spiritual leader.

China has occupied Tibet since 1950. The Dalai Lama fled his homeland nine years later, after an uprising against Chinese control failed.

When it comes to Christianity, the communist state for years has sought to exert control over believers by channeling its practice through the Protestant “Three-Self Patriotic Movement” and an equivalent “Chinese Catholic Patriotic Association,” which did not follow the Vatican’s leadership and appointed its own bishops – who were in turn not recognized by the Vatican.

The CCP effort has not gone smoothly: Millions of Christians have continued to worship outside the state-sanctioned “patriotic” associations – in Protestant house churches or underground Catholic congregations that remain loyal to the Pope.

(The Catholic situation was confounded somewhat when the Vatican in 2018 concluded a secret deal with Beijing in a bid to resolve disputes over the appointment and legitimacy of bishops. The controversial agreement was renewed last fall for a further two years.)

‘Rally around the CCP’

In its annual report on Christian persecution in China, the Texas-based China Aid Association (CAA) said 2020, the third year of the sinicization campaign, saw “a sustained emphasis on upholding Chinese traditions through faith groups such as ordering churches to fly the Chinese flag and sing patriotic songs in services.”

“In the context of COVID-19 pandemic prevention and control, the CCP shut down churches and banned religious activities throughout mainland China. The destruction and dismantling of crosses, prevalent in both state-run and house churches, continued during the pandemic.”

Among incidents reported to the CAA, the CCP completed the demolition of nine churches, accounting for more than 5,000 members and attendees; commandeered and repurposed an unknown further number of churches and religious facilities; instructed ministers and priests to “sinicize” sermons; sued Christians for homeschooling their children or sending them to church-run schools.

The CAA also reported that, in a Christmas greeting to Christians last December, the government’s religious affairs administration urged them, among other things, to “rally around the CCP’s central government with comrade Xi Jinping at the center,” “adhere to the path of religious sinicization,” “uphold the principle of independently and autonomously operating religion,” and take “a positive first step towards fully building a modern socialist country.”

In its report, the USCIRF recommended that the State Department retain China’s status as a “country of particular concern” – a designation under the 1998 International Religious Freedom Act reserved for the world’s most egregious abusers of religious freedom. China has been blacklisted as a CPC every year since the first set of designations in 1999.

The USCIRF also recommended that the U.S. government not send an official delegation to the 2022 Winter Olympics in Beijing if China continues to violate religious freedom.