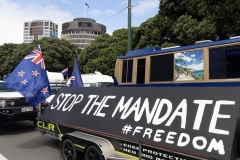 A convoy of trucks and other vehicles parked on the streets in front of parliament in Wellington, New Zealand. (Photo by Marty Melville/AFP via Getty Images)

(CNSNews.com) – Police in New Zealand arrested dozens of anti-COVID mandate protestors camped outside the country’s parliament on Thursday, in an effort to avoid a lengthy standoff mirroring the one playing out on the streets around Canada’s federal parliament since late last month.

Despite more than 120 arrests in Wellington, the capital’s police commissioner Corrie Parnell predicted that the protest could continue for days to come.

Thursday’s arrests outside parliament came two days after a Canada-inspired “Convoy-2022” rolled in the capital this week, with New Zealanders angered by vaccine mandates take their message to the seat of government.

From the far north and south of the Pacific island nation, hundreds of trucks, cars, and motorcycles bedecked with flags and banners and daubed with messages directed at the government had made their way to Wellington, applauded along the way by large numbers of well-wishers.

Vehicles were parked near parliament, in some cases blocking roads, and tents were erected on the grounds, with scores of protestors staying overnight.

Visible among the protestors were many New Zealand and some Canadian flags, and signs with messages like “Freedom,” “Stop the mandate,” and “This ends when we say no.”

While vaccine mandates and the “no jab, no job” policies in many sectors are a primary focus of the protest, demonstrators also expressed opposing to mask-wearing mandates, especially for school children.

A protestor is arrested near the parliament in Wellington, New Zealand on Thursday. (Photo by Marty Melville/AFP via Getty Images)

Amid complaints that the protest was hampering freedom of movement in the area and impacting businesses, police reinforcements were brought in from around the country.

Police warned protestors and then began to make arrests after the speaker of parliament, who has jurisdiction over the precinct, took the unusual step of ordering it closed.

Parnell said those arrested faced charges of trespassing, obstruction. Two officers had been assaulted, he said, although no assault charges had yet been laid.

Prime Minister Jacinda Ardern said on Thursday that having protests at parliament was “part of our democracy, but we do need to make sure that we keep that balance with people being able to live their lives – particularly people who live in the Wellington region or work in the Wellington region. So that is of course what the police are endeavoring to do.”

A convoy of trucks and other vehicles parked on the streets in front of parliament in Wellington, New Zealand. (Photo by Marty Melville/AFP via Getty Images)

As is the case in many other countries, deep divisions have emerged in New Zealand over the government’s approach to the pandemic – especially as vaccine mandates have taken hold.

Ardern was generally applauded early on for a tough policy of strict lockdowns and border closures that kept a lid on case numbers and deaths attributed to the coronavirus. In a country of five million, only 53 deaths and fewer than 19,000 cases have been reported since the pandemic began.

But, despite government subsidy programs, for many New Zealanders job losses, the shuttering of businesses, and a marked rise in mental health problems have taken a toll.

Mandatory full vaccination for employees in the health sector employees came into effect in December, and in the education, police, and armed forces sectors from January.

With many losing or risking losing their jobs, the government has come under pressure to relax the policy, allowing those who choose not to be vaccinated to have the option of a regular testing regimen.

A petition with almost 90,000 signatures, handed to the government on Thursday, stated, “We oppose the ‘no jab no job’ policy, which will create a divided New Zealand. We call on the government to allow the use of COVID rapid antigen testing as an alternative for unvaccinated kiwis to access workplaces, schools, marae [Mori communal places], large gatherings, and places of worship.”

In recent weeks epidemiologists have been predicting that COVID case number and deaths in New Zealand will shortly begin to rise swiftly with a looming wave of the omicron variant and a recent decision to reopen the country’s borders in stages.

The number of new daily confirmed cases passed the 300 mark for the first time on Thursday.