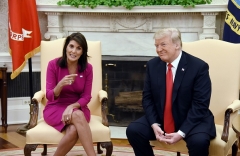 President Trump and Ambassador to the U.N. Nikki Haley in the Oval Office. (Photo by Olivier Douliery/AFP via Getty Images)

(CNSNews.com) – Former U.S. ambassador to the United Nations Nikki Haley in a weekend speech in Pennsylvania portrayed President Trump as a leader willing to do what he believes to be the right thing and to keep his word, even in the face of opposing advice and decades of precedent, citing as an example his decision to recognize Jerusalem as Israel’s capital against the counsel of most of his national security team.

As presidents of both parties had done before him, Haley said in Reading, Trump had pledged to move the U.S. Embassy in Israel to Jerusalem. Unlike them, he kept his word.

Haley said she was in the room when the Jerusalem decision was made, and of the dozen or so advisors in the discussion she was one of just three who supported the embassy move.

“So the majority of the people in his National Security Council told him not to do it, just like every president before,” she said. “And [while campaigning for the White House] he had done what every president had done before: He had promised the American people he was going to move the embassy from Tel Aviv to Jerusalem.”

“And in spite of everything, when they all said ‘the sky's going to fall, war will break out, people will die,’ he said, ‘If not me, then who? If not now, then when?’”

“And he made the call,” she recalled. “And the sky is still up there.”

Haley attributed the subsequent willingness of Arab countries like the United Arab Emirates and Bahrain to normalize relations with Israel to their recognition that with Trump they were dealing with someone who keeps his word.

“They trusted him because he kept his promise. He did exactly what he said he was going to do, and they followed through.”

The U.S. Congress in 1995 passed by large margins a law recognizing Jerusalem as Israel’s capital and stating that “the United States Embassy in Israel should be established in Jerusalem no later than May 31, 1999.”

That date came and went, and President Clinton issued a six-monthly national security waiver to delay compliance. He and his successors have issued dozens more over the ensuing years.

Haley in her remarks described Trump’s approach to the United Nations, which she characterized as a place “where murderers, dictators and thieves go to bash America – and then turn around with their hands out wanting money.”

She and her staff had compiled a book registering the percentage of time the other 192 member of the U.N. voted for or against U.S. positions, “and the last column was the amount of foreign aid that we give them.”

“I took that book and I gave it to the president,” she said. “He lost his mind. He was flipping through the pages, yelling out countries, saying I can’t believe we’re giving out countries that are saying ‘Death to America.’”

Haley said she had advised him that the U.S. should not give foreign aid based solely on recipient countries’ U.N. voting record – “but that should be one of the things that we look at. And we need to be smarter.”

Haley said the U.S. was giving a billion dollars a year to Pakistan.

“Now I’m the wife of a combat veteran. Pakistan was harboring terrorists that were trying to kill our soldiers. We don’t give that billion dollars a year in aid to Pakistan anymore,” she said. “The president took it away.”

Haley touched on North Korea – noting that Trump had stirred controversy by calling Kim Jong Un “little rocket man” – in his first speech to the U.N. General Assembly, in September 2017 – but was also able to reach out and tamp down a highly volatile situation.

“Not enough people are talking about the foreign policy under this president,” she said. “Because, if you look, we don’t have ballistic missiles going from North Korea every other weekend.”

“And while he may have called him a name, he also found a way to befriend him. And he calmed things down.”

Top US Aid Recipients Could be Affected in Trump’s Proposed Funding Audit (Jan. 26, 2017)