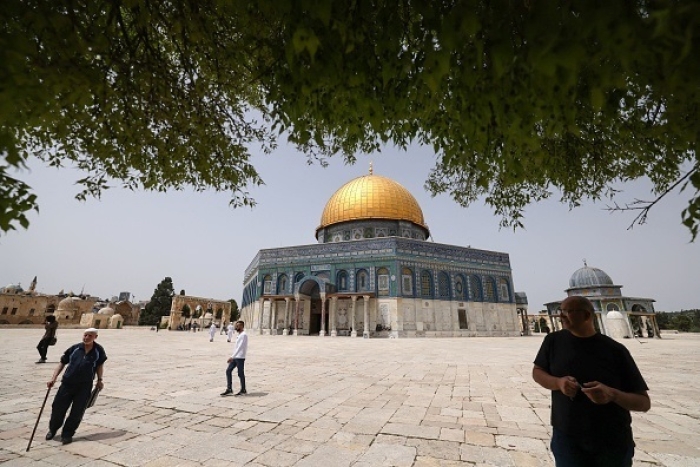 Palestinians walk on Sunday near the Dome of Rock mosque on the Old City of Jerusalem hilltop that is also the location of the al-Aqsa mosque, Islam’s third holiest. The Temple Mount is the holiest site in Judaism. (Photo by Ahmad Gharabli/AFP via Getty Images)

(CNSNews.com) – Only Muslims are allowed to pray on the Jerusalem hilltop known by Muslims as Haram al-Sharif, the Organization of Islamic Cooperation (OIC) and Arab League declared Thursday, accusing Jews of violating the sanctity of a location that is Judaism’s holiest site.

The allegations come amid several days of unrest, with masked Palestinians throwing rocks and fireworks, sometime from inside the al-Aqsa mosque itself, at police who respond with stun grenades and other “riot dispersal means.”

Before the violence erupted last Friday, tens of thousands of Muslims had visited the mosque without incident since the beginning of the Islamic fast month of Ramadan, according to Israeli officials.

The Al-Aqsa mosque is Islam’s third holiest, after the Ka’ba in Mecca and the mosque of Mohammed in Medina. The compound in which it stands is known by Jews and many Christians as the Temple Mount, location of the two biblical Temples.

Ramadan coincides with Passover this year, and some Muslims have been angered by Jews visiting Judaism’s holiest site, accusing Israel of changing the “status quo.”

That “status quo” has for years permitted Jews to visit the site on important occasions – like Passover, which runs this year until sunset on Friday – but not to openly pray there.

“Israel is maintaining the status quo, which includes the freedom of prayer for Muslims and the right to visit for non-Muslims,” said Israeli foreign ministry spokesman Lior Haiat.

He said that in a bid to quell the tensions, Israel is also set to enforce a policy, implemented periodically in past years, of barring non-Muslims from accessing the compound for the last ten days of Ramadan, a period that begins on Friday.

The Temple Mount has been under Israeli sovereignty since the area was captured from the Jordanians in the 1967 Six Day War, but Israel has ceded its oversight to a Jordanian-controlled Muslim trust, the Waqf.

Just 35 acres in extent, it is arguably the most contested piece of territory in the Middle East. Palestinians frequently accuse Israel of “storming,” desecrating and endangering Al-Aqsa, claims that inevitably spark conflict, including in the lead-up an 11-day war last spring between rocket-firing terrorists in the Gaza Strip and the Israeli military.

Ahead of prayers on the third Friday in Ramadan, there were signs that terrorist groups are once again seeking to use the issue to incite an escalation.

In a statement on Thursday, Hamas urged Palestinians to “mobilize” for Friday prayers, and praised those who, it said, had “repelled the incursions of the occupation and its settlers with courage and pride.”

The U.S.-designated foreign terrorist organization that controls Gaza said the actions of those individuals had assured “everyone far and wide that al-Aqsa has men who protect it and defend its purity, despite the ugliness of aggression and terrorism of the occupiers.”

This week terrorists fired rockets from Gaza towards Israel in the first such incidents since the May 2021 war. (One landed in the town of Sderot, the other fell short inside Gaza.) 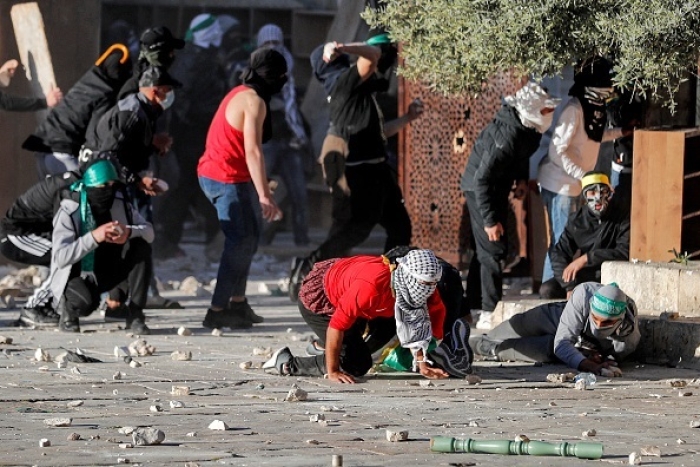 The Israeli military said it carried out airstrikes on terror infrastructure in response.

On Thursday the secretariat of the OIC, the bloc of Muslim-majority nations, announced plans for an “emergency meeting” at its Jeddah, Saudi Arabia headquarters on Monday “to discuss the ongoing Israeli attacks on al-Aqsa mosque.”

The OIC said its secretary-general, Hissein Brahim Taha, called on the international community to take urgent action to put an end to “Israeli violations against the holy sites,” and stressed the need to retain the status quo of al-Aqsa as “a place of worship for only the Muslims alone.”

“Our demands are clear, that al-Aqsa and Haram al-Sharif, in its entirety, is a sole place of worship for Muslims,” Jordanian Foreign Minister Ayman al Safadi, who chaired the meeting, told a press briefing afterwards.

“We will not accept any action against our holy sites or any attempt to alter the identity of Jerusalem.”

Jordan, which cherishes its status as custodian of al-Aqsa, has taken a confrontational stance on the issue, with the prime minister even justifying Muslims throwing rocks from the supposedly revered sanctuary.

Addressing parliament in Amman this week, Prime Minister Bisher Al-Khasawneh praised “every Palestinian who throws rocks and every Islamic Waqf worker who stands tall against the pro-Zionists defiling the Aqsa mosque under the auspices of the Israeli occupation government.”

Secretary of State Antony Blinken held separate calls Tuesday with Israeli Foreign Minister Yair Lapid, Palestinian Authority chairman Mahmoud Abbas, and Safadi, in each case stressing the need to “end the cycle of violence” and to refrain from actions and rhetoric that escalate tensions, and the importance of upholding the status quo at “the Haram al-Sharif/Temple Mount.”

In his conversation with the Jordanian minister, Blinken also emphasized “appreciation for the Hashemite Kingdom of Jordan’s special role as custodian of Muslim holy places in Jerusalem,” the State Department said.

Eastern Jerusalem fell under Jordanian rule from 1948 and 1967, a time marked by documented restrictions on freedom of worship for Jews living there. In the Old City’s Jewish Quarter, more than 50 synagogues were destroyed or desecrated, an Israeli cabinet report found in 1967. Jordan signed a peace agreement with Israel in 1994.