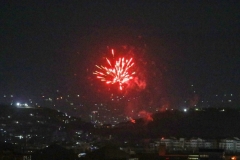 Celebratory gunfire and fireworks light up the night sky in Kabul after the last US military aircraft took off. (Photo by -/AFP via Getty Images)

(CNSNews.com) – The last U.S. military aircraft flew out of Kabul at 3:29 eastern time on Monday – a minute before midnight in Kabul – drawing a line under a 17-day evacuation mission marking the culmination of President Biden’s bid to end America’s longest war.

As the final C17, with U.S. charge d’affaires Ross Wilson and 82nd Airborne Division commander Maj. Gen. Christopher Donohue among those onboard, took off it left behind a country back in the hands of the same radical Islamist militia whose refusal to surrender those responsible for the 9/11 terror attacks 20 years ago sparked the invasion.

The announcement that the mission was over came not from the commander-in-chief whose handling of the troop withdrawal has drawn widespread criticism at home and abroad, but from U.S. Central Command commander Marine Gen. Kenneth McKenzie, briefing Pentagon reporters by video link.

Strikingly, McKenzie confirmed that not every American citizen who wanted to leave Afghanistan has been able to do so, putting the number of those still on the ground in the “very low hundreds.”

“No American citizens came out on the last – what we call the joint tactical exfiltration, the last five jets to leave,” he said. “We maintained the ability to bring them in up until immediately before departure, but we were not able to bring any Americans out.”

“That activity ended probably about 12 hours before our exit,” McKenzie continued. “Although we continued the outreach and would have been prepared to bring them on until the very last minute, but none of them made it to the airport and were able to be – and were able to be accommodated.”

McKenzie also said that, just because the military component of the evacuation was over, efforts to get the remaining Americans who want to leave would be able to do so, with the State Department taking the lead.

“The military phase of this operation has ended. The diplomatic sequel to that will now begin.”

“I believe that we are going to be able to get those people out,” he said. “I think we’re also going to negotiate very hard and very aggressively to get our other Afghan partners out.”

“Tonight’s withdrawal signifies both the end of the military component of the evacuation, but also the end of the nearly 20-year mission that began in Afghanistan shortly after September 11, 2001,” McKenzie said.

“It’s a mission that brought Osama bin Laden to a just end, along with many of his al-Qaeda co-conspirators, and it was not a cheap mission,” McKenzie said. “The cost was 2,461 U.S. service members and civilians killed, and more than 20,000 who were injured.”

“Sadly, that includes 13 U.S. service members who were killed last week by an ISIS-K suicide bomber. We honor their sacrifice today, as we remember their heroic accomplishments.”

“No words from me could possibly capture the full measure of sacrifices and accomplishments of those who served, nor the emotions they’re feeling at this moment,” McKenzie said. “But I will say that I’m proud that both my son and I have been a part of it.” 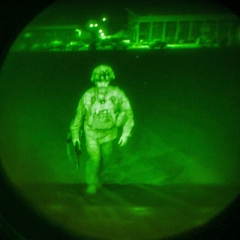 The urgent mission sparked by Kabul’s fall to the Taliban on August 15 saw U.S. forces evacuate more than 79,000 civilians, including 6,000 American citizens and more than 73,500 third-country nationals and Afghans – including SIV holders, consular staff, at-risk Afghans and their families, according to McKenzie.

“In total, U.S. and coalition aircraft combined to evacuate more than 123,000 civilians, which were all enabled by U.S. military service members who were securing and operating the airfield.”

“The last 18 days have been challenging. Americans can be proud of the men and women of the armed forces who met these challenges head on.”

McKenzie said departing forces had “demilitarized” – rendered unusable – equipment that the military wanted to use up to the last minute, including C-RAM (counter rocket, artillery, and mortar) systems – like those that intercepted rockets fired towards the airport earlier on Monday.

Up to 70 MRAPS (mine-resistant ambush protected vehicles), and 27 Humvees left at the airport would also “never be used again by anyone,” while 73 aircraft, most of which were “non-mission capable to begin with,” he said, will “never fly again.”

McKenzie said the U.S. military had not destroyed equipment needed to have the airport operational, such as firetrucks.

He said the Taliban had secured the airport perimeter ahead of the final flights out, describing the group’s conduct as “very pragmatic and very businesslike.”

U.S. forces had not formally turned the airport over to the Taliban, but Donohue had spoken to the Taliban commander with whom he had been coordinating, to “let them know that we were leaving.”

In addition to the U.S. personnel killed and wounded as cited by McKenzie, some 1,140 troops from coalition partners were killed, among them 457 British troops, 158 Canadians, 89 French personnel, 62 Germans, 53 Italians, 43 Danes, and 41 Australians.

Estimates of Afghan troops and civilians killed during the war exceed 100,000.