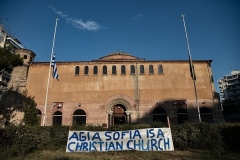 A banner in front of a Greek Orthodox Church in the Greek city of Thessaloniki on Friday. (Photo by Sakis Mitrolidis/AFP via Getty Images)

(CNSNews.com) – As the Muslim call to prayer resounded through Istanbul’s Hagia Sophia on Friday, church bells tolled in mourning in Greece, flags flew at half-staff, and during at least one protest Turkish national flags were set alight.

Turkish President Recep Tayyip Erdogan’s decision to restore Muslim worship at the sixth-century landmark, viewed by many Orthodox Christians as a central symbol of their faith, has raised temperatures between the longstanding rivals, stirring nationalist sentiment on both sides.

During a demonstration in the Greek city of Thessaloniki, protestors waved Greek flags and banners reading “For homeland, nation, and orthodoxy,” chanted slogans against Turkey, marched to the Turkish consulate, and burned Turkish flags.

The Greek foreign ministry on Twitter condemned the desecration of any country’s national symbol, in this case Turkish flags, but in a statement the same day it also described Turkey’s decision to reconvert Hagia Sophia into a mosque as “a blow to humanity’s cultural heritage.”

“At a time when we need convergence and steps towards unity, moves that foment religious and cultural division, widening rather than bridging rifts, do not contribute to understanding and closer relations among peoples,” it said.

The Turkish government reacted icily to the flag-burning, with the defense ministry warning, “Dirty hands reaching to our glorious flag will be broken.”

Turkish foreign ministry spokesman Hami Aksoy said Greece was using the Hagia Sophia issue as a pretext to display “once again its enmity towards Islam and Turkey.”

“The spoiled children of Europe, who could not bear the image of believers prostrating themselves again in Hagia Sophia, were once more delirious,” he said in a statement.

“These racist mindsets, who have not drawn the required lessons from history, those who disrespect our glorious flag should remember their fate in the Aegean.”

In response to Aksoy’s statement, it was the turn of the foreign ministry in Athens to hit back.

“The 21 century’s international community is witnessing with astonishment the rants of religious and nationalist fanaticism in present-day Turkey,” it said. “They have been condemned and are unworthy of an answer, while they increasingly expose internationally those who utter and incite them.”

Greek protesters demonstrate near the Turkish consulate in Thessaloniki. (Photo by Sakis Mitrolidis/AFP via Getty Images)

The Hagia Sophia was the epicenter of eastern Christianity for around 900 years, before the Ottomans turned it into a mosque in the 15th century. It was finally declared a museum in 1934, until this month’s controversial court ruling and decree by Turkey's Islamist president.

On Friday, Erdogan led thousands of Muslims in prayer there, the first time Muslims had held public worship in the building in 86 years.

A day earlier, the head of the Greek Orthodox Archdiocese of America, Archbishop Elpidophoros, met with President Trump and Vice President Mike Pence at the White House, and shared the church’s concerns about developments in Istanbul.

Elpidophoros told BBC radio afterwards that he “had the opportunity to express the concerns of all Orthodox Christians in the United States,” and that Trump and Pence had voiced their support.

“They clearly stated to me that they are very much sorry for this decision that Turkey has made, and that they will support the minorities in Turkey and particularly our Ecumenical Patriarchate, the head of the Orthodox Church in Istanbul.”

Patriarch Bartholomew, based at St. George’s Cathedral in Istanbul, is considered the most senior of the primates in the Eastern Orthodox Church.

Pence tweeted after the meeting, “As I told Archbishop Elpidophoros today, America will stand firm with the Greek Orthodox Church in the call for Hagia Sophia to remain accessible as a source of inspiration and reflection for every person of every faith.”

“Protecting Religious Freedom at home and abroad is a foreign policy priority for the United States of America,” the vice president added. “We cherish the faith and charitable works of the 1.5 million members of the Greek Orthodox Church in the United States.”

“This day is for us a mourning day,” Elpidophoros said in the radio interview. “This is such a painful situation for us that we announced this day as a day for mourning. It’s like Good Friday.”

The Turkish government has stated repeatedly in recent weeks that, apart from times when used for Muslim worship, the Hagia Sophia will continue to be open to all visitors.

But when asked whether that offered some comfort, Elpidophoros – who was born in Istanbul – said that since mosques everywhere are generally accessible to visitors, the supposed Turkish concession was not seen as “a gesture of goodwill.”

What is important, he said, is that Muslims will be able to pray in Hagia Sophia, while the right to worship there is being denied to Turkey’s non-Muslim citizens.

“There are certain monuments and ideas who are vested with such deep history and meaning and respect from the ages that we cannot touch them,” he said. “And it’s dangerous to play with these things.”