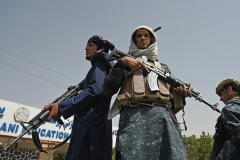 Taliban fighters in Kabul on September 11. (Photo by Aamir Qureshi/AFP via Getty Images)

(CNSNews.com) – Pakistan, historically the Taliban’s sponsor and closest ally, is leading an effort to encourage international recognition of the regime in Kabul, arguing that isolating the terrorist group has not worked in the past.

In interviews on the sidelines of the U.N. General Assembly in New York, Pakistani Foreign Minister Shah Mahmood Qureshi is calling for a “pragmatic” response from the international community, even as the Taliban presses to be recognized and to be given Afghanistan’s seat at the world body.

Qureshi told Turkey’s TRT state broadcaster that Pakistan has not “taken a decision yet” on formal recognition, but would do so “in due course.”

Although Islamabad has not yet announced formal recognition, it is evidently trying to mobilize others countries in the region to join it in doing so in a collective gesture, rather than risk criticism by taking the step alone.

Like Russia and China, it has also kept its embassy in Kabul open and operating, a form of de facto recognition of the authorities now in power. Taliban officials’ social media feeds feature daily meeting with ambassadors or visiting delegations from Pakistan, as well as from Turkey, Qatar, China, and Central Asian neighbors.

“Intimidation hasn’t worked on the Taliban,” Qureshi argued. “If it hasn’t, then I think there has to be a new approach. There could be innovative means of engaging with them, incentivizing, you know, positive behavior. This is what we are suggesting.”

“Their role is changing from a fighting force to a leadership that has to provide governance, you know,” Qureshi told TRT. “Expectations change, demands change, and they have to fall in line with that. They also realize that they will need international help and assistance.”

“And you see their behavior is somewhat different from the past,” he added, referring to the Islamic fundamentalist group’s previous stint in power, when it controlled most of Afghanistan from 1996-2001.

In fact, apart from its seizure of power from an elected government last month, the regime has attracted strong criticism for its discriminatory and demeaning treatment of women, reprisal killings, harsh response to dissent, and the naming of an all-male, virtually all-Pashtun cabinet that includes U.S.-wanted terrorists and numerous others blacklisted by the U.N. for terrorism.

In another interview in New York, Qureshi told the Associated Press that a “realistic” and “pragmatic” approach was needed, both by the Taliban and the international community. 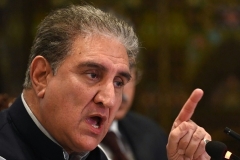 If the regime lives up to the expectations of the international community, he said, “they would make it easier for themselves. They will get acceptability, which is required for recognition.”

Qureshi said Islamabad’s message to the international community was: “Be more realistic in your approach. Try an innovative way of engaging with them.”

Qureshi also called for the U.S. and others to release frozen funds, suggesting that it was unfair to demand that the Taliban allow women to work and reopen schools but then withhold money it needs to pay salaries.

“So the best option is, unfreeze money that belongs to Afghanistan.”

(The dispute is not about the Taliban re-opening schools, but over its policy of not allowing high school girls to return to their classrooms. Primary school classes have been segregated.)

Secretary of State Antony Blinken on Thursday expressed confidence that most of the world’s nations were in agreement on the question of Taliban recognition.

Briefing reporters in New York on his engagements at the U.N. high-level week – one of his last encounters was a bilateral with Qureshi – he said that “across those meetings, we underscored how critical it is that the international community remain united in its approach.”

“Our message to the international community is that any legitimacy or support that might flow to the Taliban depends on them meeting commitments that they’ve made in key areas, all of which are enshrined in a recent U.N. Security Council resolution,” he said,

Asked whether he thought countries like Pakistan and China were “on board,” Blinken replied, “I think there is a very strong unity of approach and unity of purpose.”

He pointed again to the Security Council resolution passed on August 30, which called on the Taliban to ensure freedom of travel, not allow Afghanistan to be used as a springboard for terror attacks against other countries, allow humanitarian aid, uphold human rights including women’s rights, and to establish an inclusive government.

Blinken also cited a statement signed by “well over 100 countries” calling on the Taliban to allow freedom of travel.

“I think the international community writ large is looking to the Taliban to make good on those commitments.”

“That’s what we’re looking for, and it’s again not just us. It’s the Security Council and its countries around the world.”

China and Russia both withheld their support from the Security Council resolution cited by Blinken. Neither of them, nor Pakistan, nor most of the world’s other major Islamic nations, signed the statement he referred to.