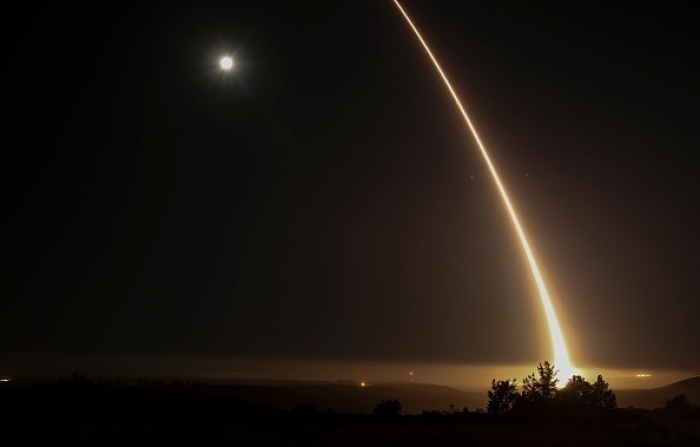 A streak of light trails off into the night sky as the US military test fires an unarmed ICBM at Vandenberg Air Force Base in 2017. (Photo by Ringo Chiu/AFP via Getty Images)

(CNSNews.com) – Three days after President Vladimir Putin ordered Russian nuclear deterrent forces to be placed on heightened alert, the Pentagon said on Wednesday it was postponing a long-planned test launch of an intercontinental ballistic missile, to ensure that the action was not misinterpreted by the Russians.

Pentagon Press Secretary John Kirby told a briefing the decision by Defense Secretary Gen. Lloyd Austin to call off the Minuteman III test was designed “to demonstrate that we are a responsible nuclear power,” and had not been taken lightly.

“We recognize at this moment of tension how critical it is that both the United States and Russia bear in mind the risk of miscalculation, and take steps to reduce those risks.”

Kirby said that not going ahead with the test did not mean “a step backwards in our readiness,” and would not affect the U.S. nuclear deterrence.

“We remain confident in our strategic posture,” he said, “and our ability to defend the homeland and our allies, and our partners remains fully intact and ready.”

Senate Armed Services Committee ranking member Sen. Jim Inhofe (R-Okla.) said it was “disappointing” that Austin had decided to cancel the routine test “in the face of Russian bluster.”

Inhofe said in a Twitter post that the test was “critical to ensure our nuke deterrent stays effective.”

The U.S. has in its arsenal an estimated 440 Minuteman III ICBMs, the only land-based component of the nuclear weapons triad.

The U.S. Air Force tests unarmed ICBMs regularly, about four times a year. They are launched from the Vandenberg Space Force Base in California, reach speeds exceeding 15,000 miles per hour, and typically splash down near Kwajalein Atoll in the Marshall Islands, more than 4,000 miles away.

According to the Air Force Global Strike Command in Louisiana, the tests “verify the accuracy and reliability of the ICBM weapon system, providing valuable data to ensure a continued safe, secure and effective nuclear deterrent.”

After a successful Minuteman III test launch last August, the commander of the Vandenberg-based 576th Flight Test Squadron, Col. Omar Colbert, described it as “just one example of how our nation’s ICBM fleet demonstrates operational readiness and reliability of the weapon system.”

At Wednesday’s briefing, Kirby declined to “talk about the specifics of our deterrent posture except to repeat what I've heard the secretary say many times – that he’s confident, that he’s comfortable that the strategic deterrent posture that we have in place is up to the task of defending the homeland, and our allies, and our partners.”

Delaying the test, he said, is “not going to change our strategic deterrent posture one bit.”

“It is a wise and prudent decision by the secretary to send a strong clear unambiguous message to Mr. Putin how seriously we take our nuclear responsibilities, at a particularly tense time.”

Kirby said planning for such tests begins three to five years in advance. There was no rescheduled date yet set for the test that was to have taken place this week.

Last month Putin carried out drills of nuclear-capable bombers, missiles and warships, just days before launching the invasion of Ukraine.

Then last Sunday, he ordered his generals to place the nuclear deterrent forces “on the highest alert” in response to what he called “aggressive” statements from leading NATO members.

Asked at a background briefing Wednesday if the U.S. has seen any actual changes to the Russian nuclear posture, a senior Defense official said the Pentagon had “seen nothing that gives us pause to reconsider the strategic deterrent posture that we have in place for the homeland and the defense of our allies and partners.”

“We’re watching it every day with – after Mr. Putin’s announcement, but we’ve seen nothing that would give us less comfort in our own strategic deterrence posture,” the official said.

During a time of raised tensions after North Korea carried out a nuclear test in early 2013, then-Defense Secretary Chuck Hagel that spring delayed a scheduled Minuteman III test. The White House said at the time the goal was to ensure that the launch “would not be misinterpreted as something in response to the situation on the peninsula, or something that would potentially exacerbate tensions on the peninsula.”

The test then went ahead at Vandenberg six weeks later.

Amid renewed tensions between North Korea and the U.S. in 2017, Pyongyang pointed to the test launch of a Minuteman III as evidence of U.S. hostility, declaring that the U.S. was driving the regional situation to an extreme pitch.”