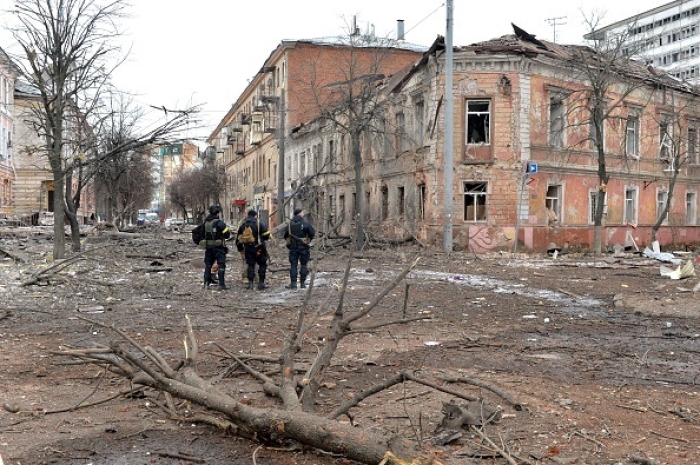 The result of Russian shelling in Ukraine's second-biggest city of Kharkiv on March 7, 2022. (Photo by SERGEY BOBOK/AFP via Getty Images)

(CNSNews.com) – Both the State and Defense Departments on Wednesday rejected Russian allegations that the U.S. has been working on biological weapons facilities in Ukraine, and a Department of Defense spokesman said the claims were “malarky” and not worth “a drop of ink.”

The administration cautioned that Russia has a record of accusing opponents of activities that it is itself carrying out or planning to carry out.

“This Russian disinformation is total nonsense, and not the first time Russia has invented such false claims against another country,” said State Department spokesman Ned Price. “Also, these claims have been debunked conclusively and repeatedly over many years.”

Price said the U.S. “does not own or operate any chemical or biological laboratories in Ukraine,” is in full compliance with its obligations under the chemical and biological weapons conventions, and “does not develop or possess such weapons anywhere.”

“Russia has a track record of accusing the West of the very crimes that Russia itself is perpetrating,” he said. “These tactics are an obvious ploy by Russia to try to justify further premeditated, unprovoked, and unjustified attacks on Ukraine.”

Two weeks into Russia’s war on Ukraine, foreign ministry spokeswoman Maria Zakharova charged on Wednesday that the Ukrainians have been urgently trying to cover up the traces of military biological facilities which she said were financed by the Pentagon.

Zakharova alleged that lab workers had been racing to destroy hazardous pathogens including anthrax and cholera, and said Moscow believes the U.S. administration and the Pentagon are obliged to inform the international community officially about the programs.

Rossiyskaya Gazeta, the official government paper, claimed this week that not only were the Ukrainians hiding evidence of biological weapons work, they had also been working on a radioactive so-called “dirty bomb.”

The story gained traction on Tuesday, when Sen. Marco Rubio (R-Fla.) asked Under Secretary of State Victoria Nuland, "Does Ukraine have chemical or biological weapons?"

Nuland, appearing before the Senate Foreign Relations Committee, responded: "Ukraine has biological research facilities which, in fact, we’re now quite concerned Russian troops, Russian forces, may be seeking to gain control of, so we are working with the Ukrainians on how we can prevent any of those research materials from falling into the hands of Russian forces should they approach."

Rubio followed up, saying: "I’m sure you’re aware that the Russian propaganda groups are already putting out there all kinds of information about how they have uncovered a plot by the Ukrainians to unleash biological weapons in the country, and with NATO’s coordination. If there is a biological or chemical weapon incident or attack inside Ukraine, is there any doubt in your mind that 100% it would be the Russians behind it?"

She responded: "There is no doubt in my mind, Senator. And in fact, it is a classic Russian technique to blame the other guy for what they are planning to do themselves."

Rubio later tweeted : "DANGER!!! This is how #Russia sets up false flags. If there is a biological weapons incident in #Ukraine be 100% certain its the Russians who did it."

Pentagon Press Secretary John Kirby on Wednesday called the Russian claims “absurd,” “laughable” and “in the words of my Irish Catholic grandfather, a bunch of malarky.”

“We are not – not -- developing biological or chemical weapons inside Ukraine. It’s not happening.”

Kirby said Russia has been known to accuse others of doing what it is itself doing or planning to do, although he stressed that he had no evidence to indicate that Russia had such plans in Ukraine now.

“I have no intelligence indicators that that type of weaponry is in Ukraine and being planned to be used, so I want to be clear,” he said.

“But it is of a piece of the Russian playbook to blame others for that which you are about to do or you are considering doing,” Kirby said. “They’ve done that plenty of times before.”

At a briefing in Beijing on Tuesday, Chinese foreign ministry spokesman Zhao Lijian sought to amplify the Russian allegations.

“According to reports, a large quantity of dangerous viruses are stored in these facilities. Russia has found during its military operations that the U.S. uses these facilities to conduct bio-military plans,” he said.

Zhao said China urged “relevant sides to ensure the safety of these labs.”

“The U.S., in particular, as the party that knows the labs the best, should disclose specific information as soon as possible, including which viruses are stored and what research has been conducted.”

Over the past decade, Russia has on numerous occasions accused rebels in Syria’s civil war of planning or staging chemical weapons attacks, although the majority of such attacks, including the most deadly, in 2013, 2017, and 2018, were attributed to its ally, the Assad regime.

A U.N.-appointed independent commission reported that of 25 documented chemical weapons attacks in Syria between March 2013 and March 2017, “20 were perpetrated by government forces and used primarily against civilians.”

President Trump twice ordered cruise missile strikes on Assad regime targets – in April 2017 and April 2018 – after chemical attacks it blamed on the regime.

In his statement Wednesday, Price said that while Russia was making its false accusations, it was Russia itself that has active biological and chemical weapons programs, and is in violation of the chemical and biological weapons conventions.

The U.S. and allies have accused the Kremlin of using chemical weapons to assassinate former Russian spy and defector, Alexander Litvinenko in 2006, and in attempting to kill former Russian spy Sergei Skripal in 2018 and Putin critic Alexei Navalny in eastern Russia in 2020.

In 2004, a West-leaning Ukrainian presidential candidate, Viktor Yushchenko, suffered dioxin poisoning while campaigning against a pro-Russian rival, in a covert attack that left his face severely scarred.