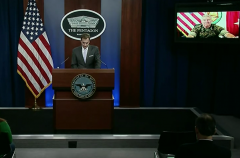 Update: On Monday evening the Pentagon once again declined to identify the names of the individuals killed in the Aug. 27 strike in Nangarhar. “No,” said Pentagon spokesman Army Major Rob Lodewick, when asked if the DoD could provide their names, nationalities and any information available about their roles in ISIS-K. “They’re classified.”

(CNSNews.com) – The Pentagon has yet to release the names of two individuals killed in an airstrike in Afghanistan last month, two days before a second airstrike near Kabul airport which killed not an ISIS-K terrorist but ten civilians, seven of them children.

The August 27 unmanned strike in Nangarhar province came a day after terrorists killed 13 U.S. service personnel and more than 160 Afghan civilians in a suicide bomb and gunfire attack at Kabul airport, where the evacuation mission was underway.

More than three weeks since the Nangarhar strike, the identities of the two people, described by Pentagon officials as “high-profile” ISIS-K “planners” and “facilitators,” remain unknown.

On Friday, as he fielded questions about the Kabul strike that the Pentagon now acknowledges killed civilians, Pentagon Press Secretary John Kirby, in response to a question, said that no review would be conducted into the earlier strike, in Nangarhar.

At the same briefing, U.S. Central Command Commander Marine Gen. Kenneth McKenzie accepted that the Kabul strike had been “a terrible mistake,” but pointed to the “very successful” one in Nangarhar as evidence that the entire counter-terror operation in those chaotic final days in Afghanistan was not a failure.

“We believe that the strike we took a couple of days prior up in Nangarhar actually had an effect on quietening down [the threat level] because we got a key attack planner in that strike,” he said. “We believe that disrupted some of their plans.”

Later in briefing, McKenzie returned to the earlier strike.

“We conducted a very successful drone strike two days earlier up in Nangarhar province. And we got the target,” he said. “And I think that had a significant event on dislocating and suppressing ISIS-K's ability to attack us during this period of time. So, we actually had success with that.”

Exactly who was killed in the Nangarhar strike, however, and how significantly placed within the terrorist group, has not been made public – although Kirby has said several times that the Pentagon is aware of their identities.

“But who were they?” Heritage Foundation scholar Steven Groves wondered in commentary on Thursday. “Were they involved in the airport attack, or were they two mid-level schlubs who were at the wrong place at the wrong time? The lack of an official answer at this point in time suggests the latter.” 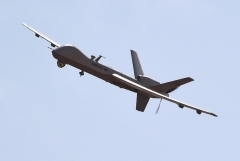 A timeline of Pentagon comments relating to the identities of the Nangarhar strike targets follows:

Maj. Gen. Hank Taylor, deputy director of the Joint Staff for regional operations: “Yesterday U.S. military forces conducted an over-the-horizon counterterrorism operation against an ISIS-K planner and facilitator. The air strike occurred in the Nangarhar province of Afghanistan. I can confirm that as more information has come in that two high profile ISIS targets were killed and one was wounded and we know of zero civilian casualties.”

Kirby: “They were ISIS-K planners and facilitators. And that’s enough reason there alone. I won’t speak to the details of this – of these individuals or what their specific roles might be. But as the general said, we had the ability and the means to carry out over-the-horizon counterterrorism capabilities and we're going to – we’re going to defend ourselves. And I think I’ll just leave it at that.”

Reporter: “Can you give us the names of the two individuals killed in this raid?”

Kirby: “No, we’re not going to release the names.”

Kirby: “We’re just not going to release them.”

Reporter: “Have you deterred? Have you degraded? What is your conclusion about what the impact of this strike actually has been?”

Kirby: “They have two high profile planners or facilitators – one planner, one facilitator – that are no longer on their muster roll. So, they have lost some capability to plan and to conduct missions.”

Kirby: “We know who they are.”

Reporter: “Can I get more clarity on why we can’t know the names of the ISIS-K suspects that were hit on Thursday?  I’m having a hard time understanding. They were described as high-profile planners, facilitators. The president has said that we will hunt you down. Why can’t we know who the ‘you’ is?”

Kirby: “Well, there’ll probably be a time when we can talk you about the – the names.  That’s not the time right now. We are still dealing with, as we saw from last night’s rocket attacks, very real, ongoing threats, and I think we’re doing what we believe to be the prudent thing with respect to the release of information.  We’re giving you as much as we can in as close to real time as we can, but we're not going to be able to give you everything … There will probably become a time when we can be more forthcoming.  Now is not that time.”

Reporter: “On the strike in Nangahar, you – can you – if – why don’t you name those high-level, high-profile ISIS officials yet? You don’t have the names?”

Kirby: “We know who they are. I think at – at the time, we didn’t release the names because we were being, we were in the middle of a very fluid threat environment. Let me see if, you know, if that’s information that can be provided now.  I don’t know.  I mean, I – we know who they are, I don’t know if it’s information that – that we’re going to be able to provide right now.”

Reporter: “Will you be able to confirm at any point the people’s names or identities of those killed in the two drone strikes targeting alleged ISIS militants in the last days of – before the withdrawal was complete?”

Kirby: “What I can say is that I cannot confirm them at this time.”

Reporter: “Is there any time in the future that you’ll be able to do that?”

Reporter: “Will there be a review of the first strike at all?”

Kirby: “The one in Nangarhar?”