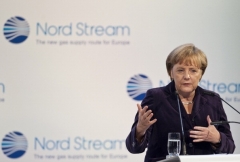 German Chancellor Angela Merkel is a strong supporter of the pipeline project. (Photo by John MacDougall/AFP via Getty Images)

(CNSNews.com) – German Chancellor Angela Merkel has long shrugged off U.S. calls to end a controversial gas pipeline project with Russia, but now pressure is coming from within her own party, amid anger over the alleged poisoning of a prominent critic of President Vladimir Putin.

Evidence that Alexei Navalny was poisoned with Novichok – the same military-grade nerve agent used in a failed attempt to assassinate former Russian spy Sergei Skripal in 2018 – has placed relations between Germany and Russia on edge.

Navalny, 44, is being treated in a Berlin hospital, after falling gravely ill on a flight from Siberia to Moscow on August 20. Doctors say his condition is stable, but have not ruled out long term damage to his health.

After a German armed forces laboratory confirmed evidence of Novichok poisoning, Merkel said on Wednesday, “there are very serious questions now that only the Russian government can answer – and must answer.”

Kremlin spokesman Dmitry Peskov said on Thursday there was “no reason to accuse the Russian state,” and that Germany had yet to provide evidence to back up the allegations. (Russia continues to deny involvement in Skripal’s poisoning.) 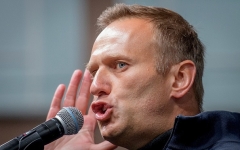 Navalny was airlifted to Berlin late last month at the initiative of a non-profit group, around the same time as Merkel offered medical help in Germany.

Now the issue is placing pressure on the chancellor over the Nord Stream 2 pipeline, a project to bring Russian natural gas to Germany via the Baltic seafloor, significantly increasing the current supply.

“Russia pursues inhuman & contemptuous politics. Diplomatic rituals are no longer enough,” he tweeted. “After the poisoning of [Navalny] we need a strong European answer, which Putin understands: The EU should jointly decide to stop Nord Stream 2.”

President Trump has repeatedly criticized Germany for going ahead with the pipeline at the same time as the U.S. is expected to help protect Germany from Russia. (He has also tied the issue to that of defense spending, which in Germany and many other NATO members remains below an agreed-upon target of two percent of national GDP.)

The U.S. also hopes to export more of its own liquefied natural gas, by ship, to Europe.

In a later tweet, Röttgen, who is one of three candidates running for the CDU leadership in an election due in December, appeared keen not to align himself with the U.S. position, pointing instead to European Union divisions over the pipeline.

“Nord Stream 2 is not wrong because the Americans see it that way, but because it was against the majority of Europeans from the start,” he said, reiterating that he remains opposed to U.S. sanctions against companies involved in the project.

Before the Novichok confirmation, Merkel had said it wasn’t appropriate to link the Navalny situation with Nord Stream 2. A consortium of Russian and European entities have invested more than $9 billion in the enterprise to date.

U.S. sanctions against Nord Stream 2 partners, included in the National Defense Authorization Act for fiscal year 2020, were credited for slowing down work on the nearly-complete project. The NDAA for FY2021, still under consideration, includes even stronger sanctions.

E.U. member-states generally oppose U.S. extraterritorial sanctions – for example those relating to Iran or Cuba – but Nord Stream 2 has muddied the waters, since some countries in central and eastern Europe are strongly opposed to the pipeline.

Like the U.S., they worry it will benefit the Kremlin by increasing Europe’s energy dependence on a government with long history of using energy as a weapon in political disputes.

‘Hold those in Russia accountable wherever the evidence leads’

The Trump administration has not minced word on the Navalny affair, with National Security Advisor Robert O’Brien warning it could impact U.S.-Russia relations.

“Russia has used chemical nerve agents in the past and we’re working with our allies and the international community to hold those in Russia accountable wherever the evidence leads, and restrict funds for their malign activities.”

“The Russian people have the right to express their views peacefully without fears of retribution of any kind, and certainly not with chemical agents,” she added. “And no-one has been tougher on the Russian government than this president.”

After Skripal and his daughter narrowly escaped death in Britain, the Trump administration expelled 60 Russian diplomats and imposed two rounds of sanctions against Russia.

Democrats frequently accuse Trump of being soft on Putin, with House Speaker Nancy Pelosi in particular repeatedly saying Trump is inviting Russian interference in the election, and insinuating that Putin has some kind of leverage over the president.

In an op-ed Thursday Sen. Ted Cruz (R-Texas), who has led bipartisan opposition in Congress to the Russia-to-Germany pipeline, made a case for a second Trump term, highlighting foreign policy achievements which he argued a Biden administration would reverse or undermine.

On Russia, Cruz wrote, “in the past four years, the Trump administration has stood up to Russia’s growing influence in Europe, especially when it comes to stopping the construction of Nord Stream 2 pipeline, which would vastly strengthen Russia at the expense of the rest of the free world.”