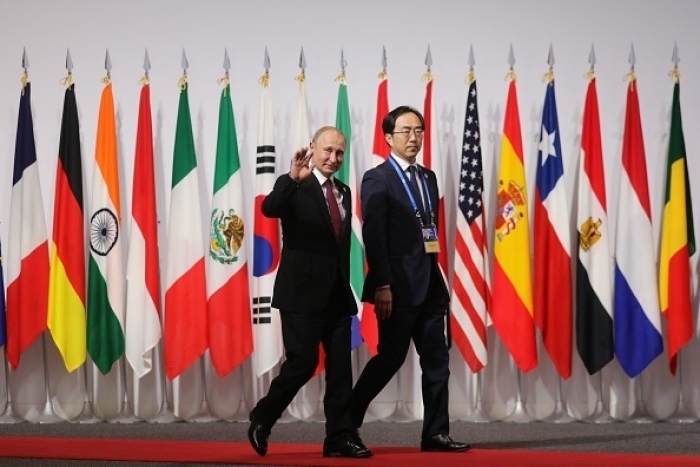 Russian President Vladimir Putin at a G20 summit in Osaka, Japan, in 2019. (Photo by Ludovic Marin/AFP via Getty Images)

(CNSNews.com) – On the day Russia said it was withdrawing from the Council of Europe – preempting a move to expel it – a Polish government minister discussed with U.S. officials a proposal to kick Russia out of the G20, allowing Poland to take its place.

“We talked about excluding Russia from the G20, including our country and strengthening economic cooperation between Poland and the USA.”

Nowak’s ministry quoted him as saying, “By invading Ukraine, Russia violated the principles of international cooperation, which is a basis for its exclusion from organizations that guarantee international economic and financial stability. Today there is no place for it in G20 and FSB.”

(The FSB, Financial Stability Board is an international body, established by the G20 in 2009, that “monitors and makes recommendations about the global financial system.”)

“As the world’s second fastest-growing country over the past 30 years, Poland certainly deserves a place in G20,” Nowak said.

Nowak also held meetings at the departments of State and Commerce. Queries sent to the State Department about the U.S. position on Russia’s membership in the G20 brought no response by press time.

According to World Bank data for 2020, Poland is the 21st biggest economy by GDP in the world.

(The banking and financial services corporation ING Group estimates that the Ukraine war could lower Poland’s GDP this year by 1.3 points, against its prior baseline growth forecast of 4.5 percent. Of the three million Ukrainians who have left their country since President Vladimir Putin’s invasion began on February 24, more than 1.8 million have entered Poland.)

The G20 comprises 19 countries plus the European Union. Its membership closely aligns with but does not mirror the list of largest global economies. Two of its members, Argentina and South Africa, are not among the 19 largest economies, while three countries that are in the list of top 20 GDPs, Spain, the Netherlands, and Switzerland, are not members. 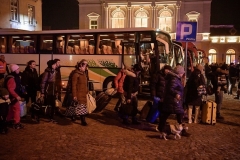 People rush to board buses taking them to Warsaw, now a main hub for transportation of Ukraine war refugees. (Photo by LOUISA GOULIAMAKI/AFP via Getty Images)

Poland’s ranking in 21st place would not therefore in itself merit its inclusion, were Russia to be expelled. At the same time, Russia’s exclusion would be no less reasonable than the fact Spain, the Netherlands, and Switzerland are not in the G20.

Still, the likelihood of Russia being kicked out of the G20 appears slim. The group operates on consensus, and its ranks include not just China, but also other countries that have not imposed sanctions in response to the war:  Argentina, Brazil, India, Indonesia, Mexico, Saudi Arabia, South Africa, and Turkey.

Russia was kicked out of the then-G8 in response to the annexation of Crimea in 2014.

But that same year, attempts to exclude President Vladimir Putin from a G20 summit being hosted by Australia were rejected by China, India, Brazil, and South Africa.

Four months before the G20 summit, Russian-backed separatists had used a Russian-made surface-to-air missile to shoot down a Malaysia Airlines Boeing 777 over eastern Ukraine, killing all 298 people onboard, including 28 Australians.

In Brisbane that November, however, Ukraine did not feature in the end-of-summit communique.

It did come up in bilateral sideline meetings between Putin and other leaders, including President Obama, who described their interaction as “businesslike and blunt.”

This year’s G20 summit is planned for October in Bali, Indonesia. The host government is reportedly hoping to keep the Ukraine crisis off the agenda – a stance supported on Tuesday by Chinese foreign ministry spokesman Zhao Lijian, who said the G20 “it is not a proper place to discuss political and security issues such as Ukraine.”

Relations between Russia and much of the international community are significantly chillier now than in 2014, and the prospect of Putin sitting down with European and American leaders, seven of whom are in NATO, is hard to envisage – “hardly imaginable,” German finance minister Christian Lindner said recently.

If the liberal democracies in the G20 refuse to participate in any summit attended by Putin, the grouping would effectively stop functioning.

Australian Prime Minister Scott Morrison early this month signaled that he was open to the idea of expelling Russia from the G20.

“We are seeking to impose maximum cost together with our allies and partners on Russia,” he said in response to a question on Russia in the G20. “They have self-selected themselves as a pariah state and that’s how they should be known all around the world. And no one should have anything to do with them, frankly, right around the world.”

The move came shortly before the CoE’s assembly was due to vote to expel Russia, after suspending it after the invasion began last month. A resolution was subsequently endorsed by unanimity.

“Russia will not participate in the transformation by NATO, and the E.U. obediently following them, of the oldest European organization into another platform for incantations about Western superiority and narcissism,” Moscow’s foreign ministry said earlier.

“Let them enjoy communicating with each other, without Russia.”

State Department spokesman Ned Price said in response that the U.S. shares the CoE’s values of human rights, democracy, and the rule of law.

“Russia clearly does not share these same values,” he said. “I think it is only appropriate that Russia is not a member of such a council.”