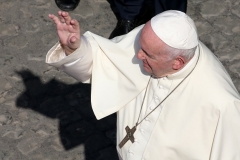 Pope Francis greets the faithful at his weekly audience on September 16, 2020 in Vatican City, Vatican. (Photo by Franco Origlia/Getty Images)

(CNSNews.com) – Secretary of State Mike Pompeo on Wednesday rejected the suggestion that his urging of the Vatican to denounce religious freedom violations in China may be linked in some way to the forthcoming election.

He argued that the Trump administration has been advocating on behalf of persecuted religious minorities in the communist-ruled nation ever since taking office.

At a press availability in Rome after Pompeo met with his Italian counterpart-- the pope declined to meet with him -- a reporter asked the secretary of state – an evangelical Protestant – what impact he thinks his prodding of the Vatican may have “on Catholic and other Christian voters” in the United States.

That mission, he said, had existed “long before the election; it will remain so after the election.”

In a speech earlier in the day to a religious freedom symposium, with senior Vatican officials in attendance, Pompeo gently nudged the Pope Francis-led Holy See to be more critical of the Chinese Communist Party’s crackdown on religious minorities, including Christians and Muslim Uighurs.

While governments “must sometimes make compromises to advance good ends,” he said, “the Church is in a different position. Earthly considerations shouldn’t discourage principled stances based on eternal truths.”

The Vatican is currently in talks to renew a controversial secret 2018 agreement with Beijing dealing with how Catholic bishops are appointed. Details are hazy, but it’s believed the provisional deal gave the CCP some level of authority to nominate bishops to vacant posts, for the Vatican to approve or reject.

Critics have accused the Vatican of selling out underground Catholics whose loyalty to Rome over many decades put them at odds with the CCP and its “patriotic” state-sanctioned “Catholic” church – which did not recognize bishops appointed by the pope but named its own, without approval of the Vatican.

In his speech, Pompeo noted that Pope Francis has called on the Catholic Church to be “permanently in a state of mission.”

“Religious leaders should understand that being salt and light must often mean exercising a bold moral witness,” Pompeo said, alluding to imagery used by Jesus in the Sermon on the Mount.

The speech came less than two weeks after the secretary of state, in an essay for First Things, directly called into question the 2018 accord.

“Two years on, it’s clear that the Sino-Vatican agreement has not shielded Catholics from the Party’s depredations, to say nothing of the Party’s horrific treatment of Christians, Tibetan Buddhists, Falun Gong devotees, and other religious believers,” he wrote.

“What the Church teaches the world about religious freedom and solidarity should now be forcefully and persistently conveyed by the Vatican in the face of the Chinese Communist Party’s relentless efforts to bend all religious communities to the will of the Party and its totalitarian program.”

The Italian news agency ANSA quoted Vatican secretary of state Cardinal Pietro Parolin, who attended Wednesday’s symposium, as telling reporters the Holy See had been “surprised” by Pompeo’s First Things article – not because the views of Pompeo and the Trump administration were not known, but because private meetings he had scheduled with Vatican officials would have been “the most opportune and suitable [setting] to talk about these things.”

“I wrote that piece to honor the moral authority of the Catholic Church and its capacity to influence and make things better for people all across the world,” he said. “They have historically stood with oppressed peoples all around the world.”

“The piece was written, and our policy has been all along, to bring every actor who can benefit the people of China from – to take away the horrors of the authoritarian regime the Chinese Communist Party is inflicting on these people. That was our mission set, and it will remain our mission set.”

Parolin, an architect of the 2018 agreement with China, has expressed hope that the accord will help to normalize life for Catholics in China, fostering unity between those in underground and state-run churches.

China is one of ten countries where the suppression of religious freedom is considered so egregious, the State Department designates them as “countries of particular concern.” China has been on the list every year since the designations were first authorized by the 1998 International Religious Freedom Act.

See also:
Cardinal Zen: We Are Witnessing 'Murder of the Church in China by Those Who Should Protect' Her (Jan. 9, 2020)

Chinese Cardinal: Vatican Has Kept Secret the Text of Deal With Atheist Regime on Naming of Bishops (Feb. 18, 2019)