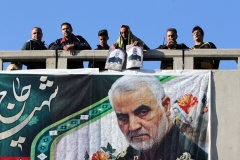 A banner featuring Qassem Soleimani's image is seen during his funeral in his hometown, Kerman, on January 7, 2020. (Photo by Atta Kenare/AFP via Getty Images)

(CNSNews.com) – Secretary of State Mike Pompeo on Thursday rejected as “spurious” the conclusion of a U.N. rights expert that the killing of Qassem Soleimani in a drone strike violated international law, saying the expert simply “gives more cause to distrust U.N. human rights mechanisms.”

The U.S. took the action against the Iranian Qods Force commander last January in the exercise of its “inherent right of self-defense” under the U.N. Charter, Pompeo said in a statement, issued on the day the expert presented her report and findings to the U.N. Human Rights Council in Geneva.

During the session, Iran’s ambassador called Soleimani a “true defender of human rights and dignity.” President Trump has called him “the world’s top terrorist.”

Agnes Callamard, the U.N.’s “special rapporteur on extrajudicial, summary or arbitrary executions,” said in her report to the HRC that the U.S. government had provided no evidence that Soleimani had been “planning an imminent attack against U.S. interests, particularly in Iraq, for which immediate action was necessary and would have been justified.”

“[A]bsent the actual imminent threat to life, the course of action taken by the U.S. was unlawful,” her report stated.

Callamard presented to the HRC a broad report on the question of targeted killing by drone, appended to which was a case study examining the January 3 strike that killed Soleimani and nine others near Baghdad airport.

Her conclusion, she told the council, was that the killing “was a violation of the U.N. Charter governing the use of force, and an arbitrary killing.” The legal term defines a killing carried out by, or on the orders of, a government without any legal or judicial process.

The unit which Soleimani headed is the Islamic Revolutionary Guard Corps (IRGC) division responsible for military and terrorist operations abroad, which was implicated in the deaths of hundreds of U.S. troops killed by Qods Force-armed Shi’ite militias during the Iraq War.

Some of those same militias carried out numerous attacks last year against Iraqi military bases where U.S. troops are deployed, culminating in one – one week before Soleimani was targeted – in which an American contractor was killed and four U.S. servicemen were injured.

The U.S. last year designated the IRGC as a foreign terrorist organization and Soleimani personally had been designated for terror-related activity by the Bush and Obama administrations.

‘Giving a pass to terrorists’

After the drone strike, Trump and Pompeo said intelligence had been received pointing to the threat of an imminent strike against American interests, including U.S. embassies.

In his statement on Thursday, Pompeo referred both to the attacks in the run-up to the drone strike, and to the risk of more attacks to come.

“The strike that killed General Soleimani was in response to an escalating series of armed attacks in preceding months by the Islamic Republic of Iran and militias it supports on U.S. forces and interests in the Middle East region,” he said.

“It was conducted to deter Iran from launching or supporting further attacks against the United States or U.S. interests, and to degrade the capabilities of the Qods Force.”

Pompeo quoted Trump as saying on the day of the strike, “We will always protect our diplomats, service members, and all Americans.”

In his later State of the Union address, Trump described Soleimani as “the Iranian regime’s most ruthless butcher” and “the world’s top terrorist.”

“General Soleimani symbolized a sovereign state, and embodied the soul and the spirit of a proud nation, determined to resist and thrive,” he said. “General Soleimani lived a hero, and died a martyr. He is now an inspiring legend and will remain a living nightmare for his killers.”

Baghaei Hamaneh said that the term “‘arbitrary killing’ seems to be too light a word to use for such a flagrantly unlawful, viciously immoral and recklessly dangerous killing.”

The Bashar al-Assad regime’s representative at the HRC, Hussam Edin Aala, called Soleimani’s killing “a crime of state terrorism,” and praised the Qods Force general as having “played a key role in the fight against terrorism.”

Following the outbreak of the Syrian civil war, Soleimani oversaw the Iranian regime’s armed intervention on behalf of the Assad regime – an intervention which reportedly cost thousands of Syrian lives.

Earlier this week, State Department spokeswoman Morgan Ortagus said in response to Callamard’s report, “It takes a special kind of intellectual dishonesty to issue a report condemning the United States for acting in self-defense while whitewashing General Soleimani’s notorious past as one of the world's deadliest terrorists.”

“This tendentious and tedious report undermines human rights by giving a pass to terrorists and it proves once again why America was right to leave,” she said, referring to the Trump administration’s withdrawal from the HRC in 2018.

In her broader report, Callamard noted the growing use of armed drones in recent years, saying that as of 2020 around 40 countries possess or in the process of acquiring them.

“The world has entered a second drone age, in which a vast array of state and non-state actors are deploying ever more advanced drone technology,” she told the council.