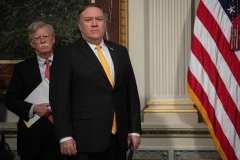 (CNSNews.com) – Secretary of State Mike Pompeo’s response to explosive allegations in John Bolton’s new memoir has been keenly awaited, and in a brief statement on Thursday night he did not mince words, calling his former colleague “a traitor” and accusing him of “lies, fully-spun half-truths, and outright falsehoods.”

“I’ve not read the book, but from the excerpts I’ve seen published, John Bolton is spreading a number of lies, fully-spun half-truths, and outright falsehoods,” Pompeo said.

“It is both sad and dangerous that John Bolton’s final public role is that of a traitor who damaged America by violating his sacred trust with its people,” he said. “To our friends around the world: you know that President Trump’s America is a force for good in the world.”

Bolton, a Republican who served as Trump’s national security advisor for 17 months up until last September, has entitled his book “The Room Where it Happened.” Pompeo headed his brief reaction statement, “I Was in The Room Too.”

Excerpts of the book, due out next week, have appeared in various news outlets. Trump has called the book “a compilation of lies and made up stories, all intended to make me look bad,” and the Justice Department has filed suit to block its release, arguing that it contains classified information, a contention disputed by Bolton’s attorney. An emergency hearing is scheduled in a D.C. district court on Friday.

Pompeo is widely viewed as a loyal member of Trump’s cabinet, a steadfast and supportive ally to the president – and, like Bolton, a foreign policy hawk.

In the published excerpts, Bolton portrays him as one of several top officials who expressed deep frustration about some of Trump’s actions and statements – behind his back.

In an excerpt that drew widespread attention, Bolton claims that during the U.S.-North Korea summit in Singapore in 2018, Pompeo showed him a note saying “he is so full of s---” – after Trump allegedly concurred with Kim Jong Un’s assessment that hostility on the U.S. side was to blame for tensions in the relationship.

Bolton also recounted other purported instances of Pompeo being stupified by things Trump said or did. According to published excerpts, they included:

--Trump’s handling of a phone conversation with South Korean President Moon Jae-in in the run-up to the Singapore summit with Kim.

--Trump’s vacillating over whether or not to punish Iran militarily after the shootdown of an unmanned U.S. surveillance drone a year ago. (Trump indicated that he would retaliate, but then said he called off a military strike at the last moment, citing the risk of casualties.)

When the news report of the Bolton memoir excerpts broke, Pompeo was in Hawaii, holding sensitive talks with China’s top diplomat, Yang Jiechi, following months of major tensions in the bilateral relationship.

The coronavirus outbreak in Wuhan has been front and center, but Beijing is also bitter about a trio of what it sees as internal territorial and sovereignty issues, involving Hong Kong, Taiwan, and Xinjiang, and the Chinese foreign ministry readout of the Pompeo-Yang talks highlighted the three issues in particular.

In the far-western province of Xinjiang, China’s mass incarceration of Uighur Muslims in internment camps has drawn strong criticism from the U.S. administration and new sanctions legislation which Trump signed into law this week (see related story).

One of the allegations Bolton makes in his book is that Trump, during a meeting with President Xi Jinping last year, expressed approval for the internment camp policy.

On Thursday Assistant Secretary David Stilwell of the Bureau of East Asian and Pacific Affairs, who took part in Pompeo’s meetings in Hawaii, briefed reporters on the talks by teleconference.

Stilwell was asked about that allegation in the book, and the apparent “dichotomy” between the administration’s approach to Xinjiang and what Bolton claims Trump told Xi.

Before he could begin to answer, State Department spokeswoman Morgan Ortagus interrupted.

Bolton served in the Reagan and George H.W. Bush administrations, then held the post of undersecretary for arms control and international security during President George W. Bush’s first term, before being nominated as ambassador to the United Nations.

After Senate Democrats balked at confirming an acerbic critic of the U.N. to be Washington’s representative to the world body, Bush appointed him to the post during a congressional recess.

Trump appointed him national security advisor in April 2018, and they parted ways less than a year and a half later. Trump says he fired him; Bolton says he resigned.