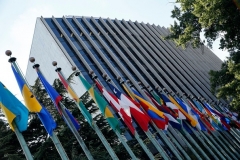 “Just as we did with the World Health Organization, the Trump administration will demand accountability from all international health organizations that depend on American taxpayer resources,” he told reporters at the State Department. “Our money must support things that create value and support our values.”

The president recently announced the U.S. would withdraw from the WHO, unhappy with its handling of the coronavirus pandemic.

PAHO is now in the administration’s sights, in this case over its role in the deployment of Cuban doctors to other countries in a program which critics say entails forced labor, a form of modern-day slavery.

PAHO, which comprises 52 member countries and territories and is headquartered in Washington, serves both as the specialized health agency for the Americas and as the WHO’s regional office.

According to the organization’s scale of assessed contributions, the United States was to account for 59.4 percent of the budget in 2020, and 56.3 percent in 2021. The next biggest contributors this year in the scale of assessments were Brazil (12.4 percent), Canada (9.8 percent) and Mexico (6.4 percent).

Even before the latest warning, the administration had already proposed a reduction of more than 75 percent in funding for PAHO in fiscal year 2021.

Pompeo on Wednesday accused PAHO of “facilitating forced labor by Cuban doctors in Brazil’s Mais Medico program, during which more than 10,000 Cuban health care workers have allegedly been trafficked.”

(Brazil established the “More Doctors” program in 2013, in a bid to broaden access to basic health care.)

Specifically, he accused PAHO of sending $1.3 billion to “the murderous Castro regime”; of failing to seek the approval of the PAHO executive council; and of collecting $75 million when brokering the program.

Pompeo said PAHO must explain these decisions and actions – including “who in the organization approved a potentially illegal agreement” and what happened to the $75 million – and “undertake reforms to prevent such things from ever happening again.”

Then he reminded PAHO of the way the administration has dealt with the WHO.

PAHO has not responded publicly to the accusations, but Cuban Foreign Minister Bruno Rodriguez in a tweet lashed out at Pompeo, describing him as “an exponent of the current corrupted and immoral U.S. foreign policy.”

“He makes his isolation all the more evident when attacking PAHO and Cuba’s medical cooperation,” he tweeted in reference to Pompeo. “He is a threat to peace.”

‘[We] were basically being trafficked’

Cuba has been sending medical staff to other countries, usually in the developing world, for decades.

The regime in Havana characterizes the medical missions as acts of international “solidarity,” but coercive practices, long workhours, the confiscation of passports, withholding of wages, and other issues have set off alarm bells.

Late last year two U.N. human rights experts – dealing with “contemporary forms of slavery” and “trafficking in persons” respectively – wrote to the Cuban government, saying that the conditions faced by medical mission staff “could amount to forced labor,” according to international standards. “Forced labor constitutes a modern form of slavery,” they added.

The State Department’s 2019 report on Trafficking in Persons found that, “Cuban authorities coerced some participants to remain in the program, including by withholding their passports, restricting their movement, using ‘minders’ to conduct surveillance of participants outside of work, threatening to revoke their medical licenses, retaliate against their family members in Cuba if participants leave the program, or impose criminal penalties, exile, and family separation if participants do not return to Cuba as directed by government supervisors.”

Miami Herald columnist Andres Oppenheimer wrote recently that Cuban doctors deployed abroad receive only about 20 percent of their salaries while “about 75 percent goes to the Cuban dictatorship and the remaining 5 percent to the Pan American Health Organization.”

At a State Department-hosted briefing on the sidelines of the U.N. General Assembly last fall, Cuban doctor Romona Matos, who worked with Cuban medical missions in Brazil and Bolivia before requesting asylum in Brazil, said the teams “were basically being trafficked” and “were victims and exploited by the Cuban government.”

She spoke about passports being confiscated and wages being frozen back in Cuba until the mission was over.

“If we broke the mission, that meant that we would lose all our earnings,” Matos said via an interpreter.

Another Cuban doctor who left the program while working in Brazil, Tatiana Carballo, told the briefing that “75 percent of our earnings were going to the Cuban government, and 5 percent was going to Brazil.”