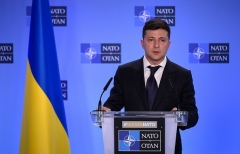 (CNSNews.com) – Whether or not Ukraine is put on a formal path to NATO membership is “a decision for NATO to make,” White House press secretary Jen Psaki said on Tuesday, after President Volodymyr Zelensky called it the most urgent issue in its relationship with the transatlantic alliance.

At a time when Russian troop movements near the troubled Donbass region are stoking new tensions, Zelensky told NATO secretary-general Jens Stoltenberg in a phone conversation that NATO granting Ukraine a “membership action plan” (MAP) would be “a real signal for Russia.”

“We are committed to reforming our army and defense sector, but reforms alone will not stop Russia,” Zelensky’s office quoted the president as having told Stoltenberg. “NATO is the only way to end the war in Donbass.”

Asked whether the Biden administration believed Ukraine should be able to join NATO soon, Psaki noted that doing so has “been an aspiration of Ukraine’s for some time.”

She described the U.S. as a “strong” supporter of Ukraine, adding that, “we are engaged with them in working to push back on the destabilizing actions.”

But on the question of membership, Psaki said, “that’s a decision for NATO to make, and we’ll continue to be, you know, recipients of their interests.”

Asked whether Zelensky had raised the issue of NATO membership with President Biden when the two spoke by phone last Friday, Psaki said it was up the Ukraine government to provide a readout on “what they raised on the call.”

“The U.S. president expressed support for Ukraine’s progress in the issue of NATO membership,” it added, without elaborating.

The White House readout of the April 2 call did not mention NATO directly, although it said the leaders had agreed that reforms being pursued by Zelensky “are central to Ukraine’s Euro-Atlantic aspirations.”

In his discussion with Stoltenberg, the Ukrainian president raised the issue of Russia massing troops near Ukraine’s borders “and increasing the level of their readiness for an offensive.”

The Kremlin has rejected complaints about the troop movements, saying it was entitled to move forces around its territory and was not posing a threat to anyone.

Since 2014, at least 14,000 people have been killed as a result of fighting between Ukrainian troops and Russian-backed separatists in Donbass, according to Kyiv, with fighting erupting sporadically despite a 2015 ceasefire. Russia also continues to control Crimea, after annexing the strategic Black Sea peninsula followed a 2014 referendum rejected by most of the international community.

“In recent weeks, we have seen a very dangerous tendency to increase the number of ceasefire violations by the Russian occupation forces [in Donbass] and the number of Ukrainian defenders killed,” Zelensky told Stoltenberg.

He also called on NATO to strengthen its military presence in the Black Sea region as a deterrent to Russia, “which continues the large-scale militarization of the region and interferes with merchant shipping.” 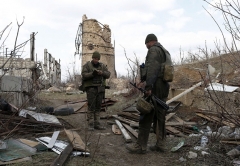 Ukrainian soldiers in the eastern Donbass region, where a war with Russian-backed separatists has dragged on since 2014. (Photo by Anatolii Stepanov/AFP via Getty Images)

The granting of a MAP – “a program of advice, assistance and practical support” – is an intermediate stage of a four-step process of joining the alliance. Ukraine and Georgia have been pressing for it for years, but NATO has been split, with some Western European members anxious not to antagonize Russia. NATO operates by consensus, so the objection of a single member is enough to block a decision.

(Getting a MAP does not necessarily mean accession is imminent. Macedonia was given a MAP more than two decades before it became NATO’s newest member a year ago.)

The Kremlin has objected to NATO’s gradual enlargement since the end of the Cold War, and is strongly opposed to its further expansion on its south-western flank. Its military intervention in Georgia in 2008, and in Ukraine since 2014, was seen to be at least partly driven by a determination to dissuade them from that path.

At a NATO summit in Bucharest 2008, the alliance was unable to reach agreement on MAPs for Ukraine and Georgia, stating instead that they “will become members” at some future but unspecified date. The formula has been repeated at virtually every NATO summit since.

In Bucharest, Germany and others led the opposition, reluctant to anger Russia but also pointing to unresolved territorial and ethnic disputes, and relatively low levels of public backing for NATO membership.

The aspiring members are also expected to implement comprehensive reforms, especially in the defense and security sector, to advance preparations for eventual membership.

In the meantime, Ukraine and Georgia have participated in a number of NATO-led missions, in particular in Afghanistan – where Georgia currently has more troops in Afghanistan than every NATO ally apart from Germany and Italy.

State Department spokesman Ned Price said Tuesday the administration was “committed to ensuring that NATO’s door remains open to aspirants when they are able to meet the commitments and obligations of membership and contribute to security in the Euro-Atlantic area.”

“We affirm our support for that open door policy that was expressed in the 2008 Bucharest declaration, and we stand by the right of each sovereign country to choose for itself whether it joins any treaty or alliance – and of course, that does include NATO.”